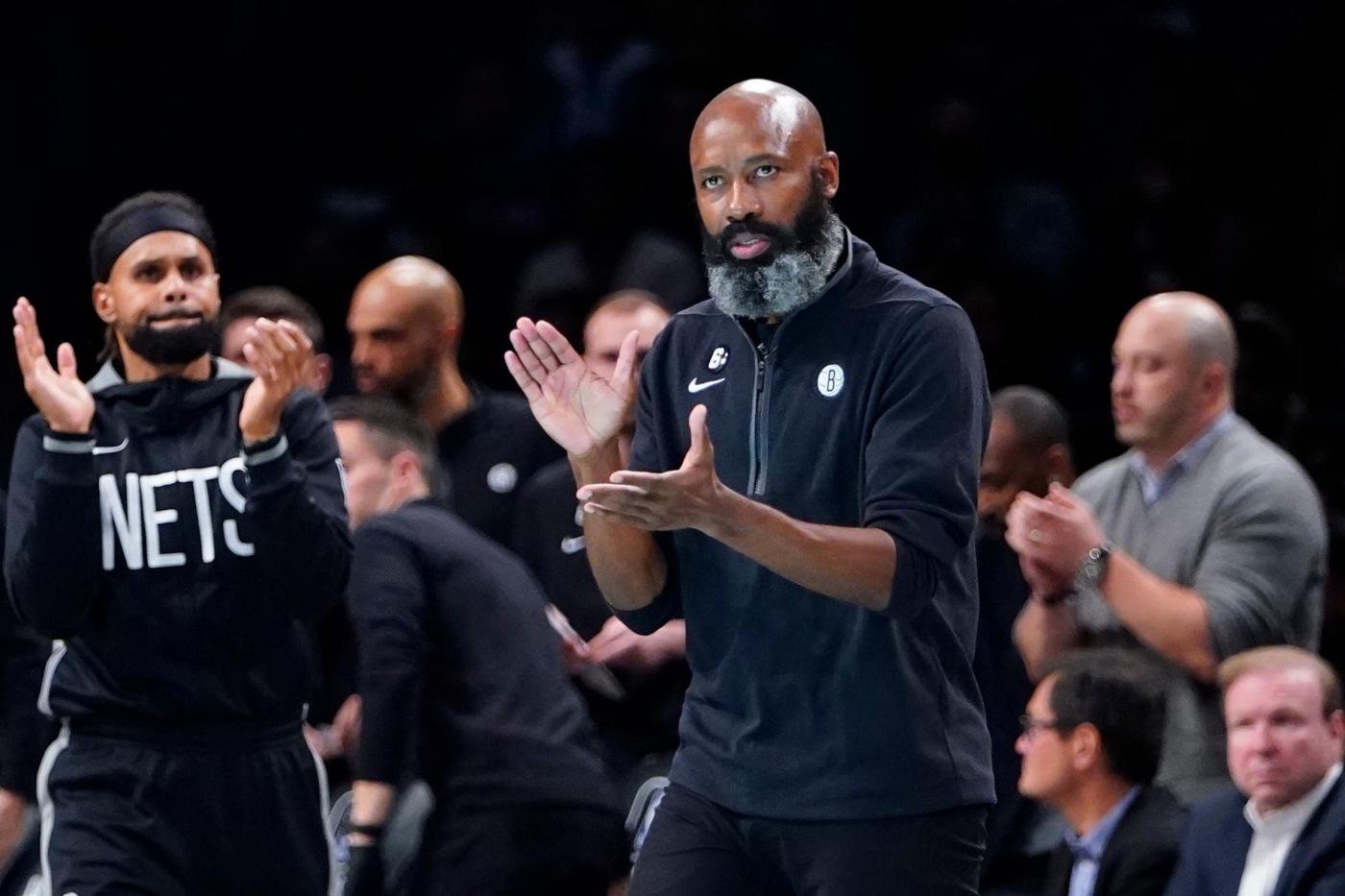 It wasn’t even close.

If we’re going by the late, legendary Kobe Bryant’s definition, a rivalry is only a rivalry if both teams involved beat each other from time to time.

The Knicks haven’t beaten the Nets since before the onset of the 2020 COVID-19 pandemic.

That didn’t change on Wednesday night.

The so-called cross-borough rivalry is as lopsided as the final score was just hours after Nets GM Sean Marks introduced Jacque Vaughn as Steve Nash’s full-time replacement at head coach. The Nets outworked the Knicks on both ends of the floor, moved the ball, made open shots and got stops consistently in their 112-85 blowout victory at Barclays Center on Wednesday.

It was another performance that underscored the very reason Marks felt comfortable promoting Vaughn in the first place. The Nets (5-7) are now 3-2 in games Vaughn has coached and have won three of their last four games.

Knicks fans in attendance sporting the vaunted orange and blue never got a chance to get into the game because the Nets blew it wide open in the opening minutes of the first quarter.

The only time they were audible was in the fourth quarter, as they grew restless while Brooklyn’s lead ballooned to more than 30. Knicks fans began booing Evan Fournier after he bricked a wide-open three off the backboard from the left wing.

“You fu—ng suck!” one Knicks fan shouted from the stands after the miss.

There were tons of misses — 59 to be exact — for the Knicks and not nearly as many for the Nets, led by Kevin Durant, whose ability to repeatedly make shots over Julius Randle’s contest forced Randle to hold his head down in disbelief.

Durant and Randle frequently went at each other, matched-up as the opposing captains of New York’s two pro basketball teams. On one possession, Durant shot a three over Randle’s hand, and the two laughed on the way back up the court once the shot went in.

Those laughs only continued, however, for one team. Durant finished with 29 points, 12 rebounds and 12 assists but got help from four other teammates who each scored in double figures. Meanwhile, Randle led the Knicks with 24 points, but the Knicks struggled to generate shots in Tom Thibodeau’s stagnant offense.

Jalen Brunson and RJ Barrett were the only other Knicks players to score in double figures.

The Nets never trailed in their wire-to-wire victory. A number of factors were at play as they ran up the score in another victory that brings the Nets closer to .500.

The ball virtually never stuck for the Nets on Wednesday night, except for when Durant used possessions as his personal mission to go at Randle early into the game.

The Nets registered 30 assists — with Durant tallying 12 — on 42 made field goals. Eight different players recorded at least one assist.

Some of it is addition by subtraction: Without Irving, a ball-dominant scorer, the Nets have had to score by committee. Most importantly, however, it’s the improved Brooklyn defense that has created more scoring opportunities by sheer virtue of the team not going against a set defense every time up the floor.

That defense will be tested as the Nets get set to embark on a four-game West Coast road trip against both star-studded Los Angeles teams and Damian Lillard’s Portland Trail Blazers.