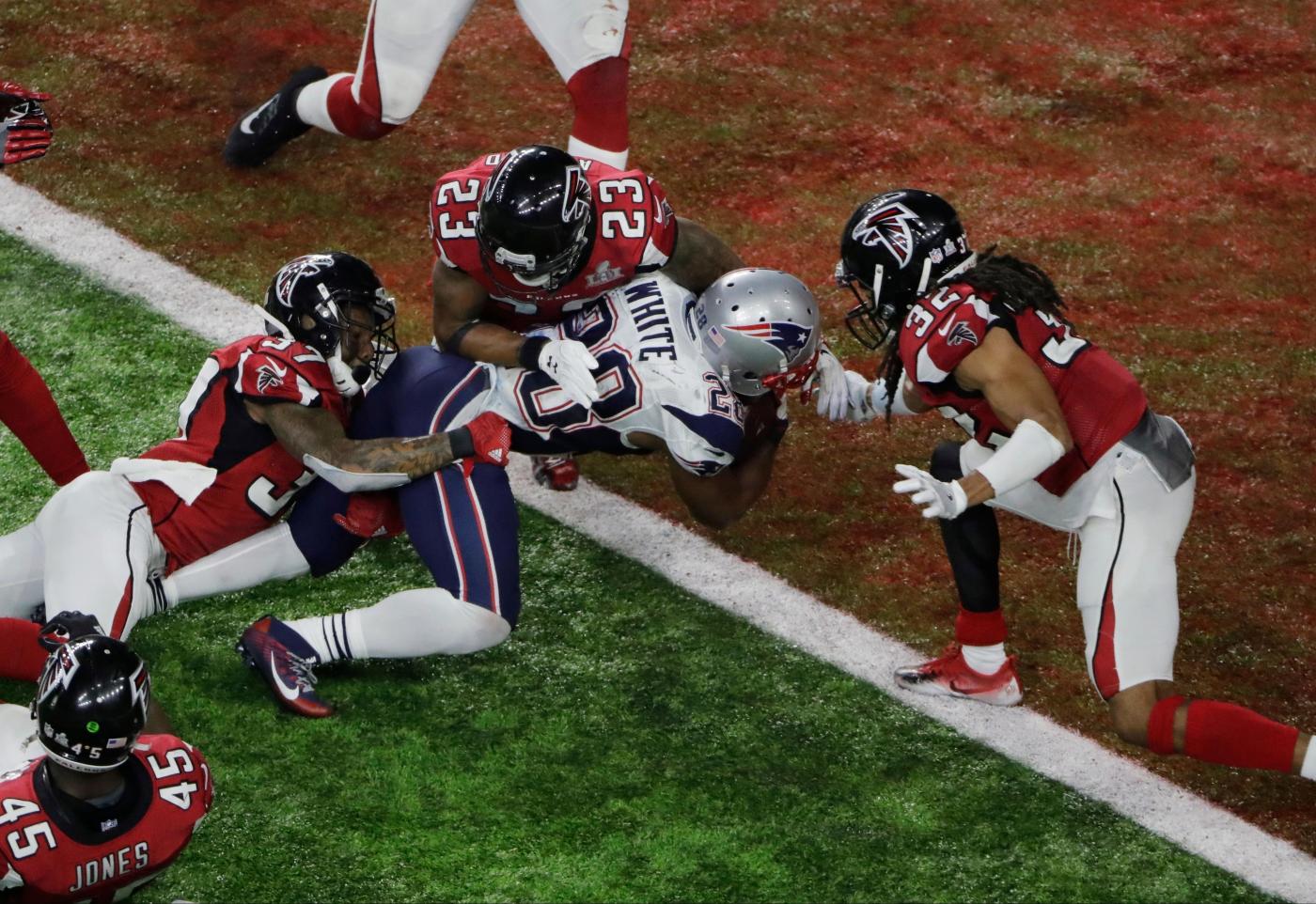 FOXBORO — Having the game’s best head coach and quarterback wasn’t the only reason the Patriots built a dynasty.

Along with Bill Belichick and Tom Brady, the Patriots always had other special players, difference-makers on offense, defense and special teams.

Sifting through the six Super Bowl wins, one of the constants was having a great third-down back, a player who could deliver in the clutch.

Kevin Faulk was one of Tom Brady’s primary go-to-guys during the first three championships. Shane Vereen, who caught a game-high 11 passes for 64 yards during the Patriots’ comeback win over the Seattle Seahawks in Super Bowl XLIX, was a big-time player in that game and more.

Then, there was James White, another from the Patriots’ fabulous third-down back stable. He was one of the unsung forces behind the last three championships.

Of course, he is most noted for his performance in the greatest Super Bowl comeback of all time against the Falcons.

It only seemed fitting that his extra effort two-yard plunge into the end zone sealed the deal in the only walk-off touchdown in Super Bowl history.

White, who announced his retirement on Twitter on Thursday thanks to the devastating hip injury he suffered early last season, had 139 yards from scrimmage, (29 rushing, 110 receiving) in that memorable game. He scored three touchdowns and a two-point conversion, setting a record for most points in a Super Bowl with 20.

All of those came after the Patriots trailed 28-3 midway through the third quarter.

Thinking of all of White’s contributions, it was hard not to immediately flash back to that game.

Former Patriots running backs coach Ivan Fears certainly did, when talking about his former back.

“That Super Bowl game against Atlanta was the epitome of what he was all about,” said Fears, when reached by the Herald. “He did everything he was supposed to do. He did it all. He ran the ball, he caught the ball, he played tough, he blocked, he did it all.”

He did it in regular-season games. He did it during the post-season. He was dependable, and someone the quarterback could always count on in a pinch.

“He sure was. He gave you everything he had,” said Fears. “And if there was a chance to make a play, he’d make the play. That was James White.

“He was out there to play. He could play at that tempo. We had almost 100 plays in that Super Bowl game. And he played his butt off. That was James. He was dependable every week.”

Sweet Feet, as he was known to his teammates, was that, and so much more.

He was an under-the-radar presence in the locker room, making sure the message from Fears, and Bill Belichick by extension, was not only heard, but taken to heart.

For most of the past eight seasons, White, who held the last locker before the exit to the weight room, has been a pillar when it comes to leadership, and steering the group in the right direction.

“For me, James was the perfect team player. He really was,” Fears said. “If there’s one thing that I loved the most, he always said the right things to the guys.

“If the guys didn’t agree with what was going on, James always had my back. And that was very, very important when you got guys whose egos were involved, or had their own opinion about what was right, what was wrong. And I love him for that. He was the best kind of player you could have in your room. He really was.”

Having someone who was so respected by the players, holding teammates accountable is such an underrated element of the team’s success. White may have been soft spoken, but still managed to wield a big stick. He provided that leadership, while also delivering on the field.

“It’s tough to say goodbye to someone like that . . . as he transitions to the next phase of his life,” Slater went on. “He’s a true Patriot, but he’s a better human being. We’re all better for having been around him.”

Fears didn’t want to single out anyone as being the Patriots best-ever third-down back, but White certainly deserves to be in any conversation.

“It would be hard to put a tag on who was the greatest. They all had their strong points … but talent-wise, he was definitely in that group. Those guys were very successful for us. When it comes to that aspect of the game, he was one of the best.”

Brady, who reached out on Twitter to congratulate his former teammate on having “the perfect career,” has always thought White should have been the MVP of that miraculous Atlanta Super Bowl comeback. He also always loved having a great third-down back. It was that important to him, and still is as Tampa Bay’s quarterback.

“When you played with Brady, and the kind of player he was, the (third-down back) had to be a very intelligent player, a very dependable player, and we were always able to find that guy,” said Fears. “James was a special player for us. He really was.”

No argument here. White’s presence will be missed on so many fronts. As one of the team’s most dependable, and durable players, it’s tough to see an injury cut his career short. But what a career it was. Sweet Feet leaves as one of the best to ever play the position.

And one of the best to ever make a home in the Patriots locker room.