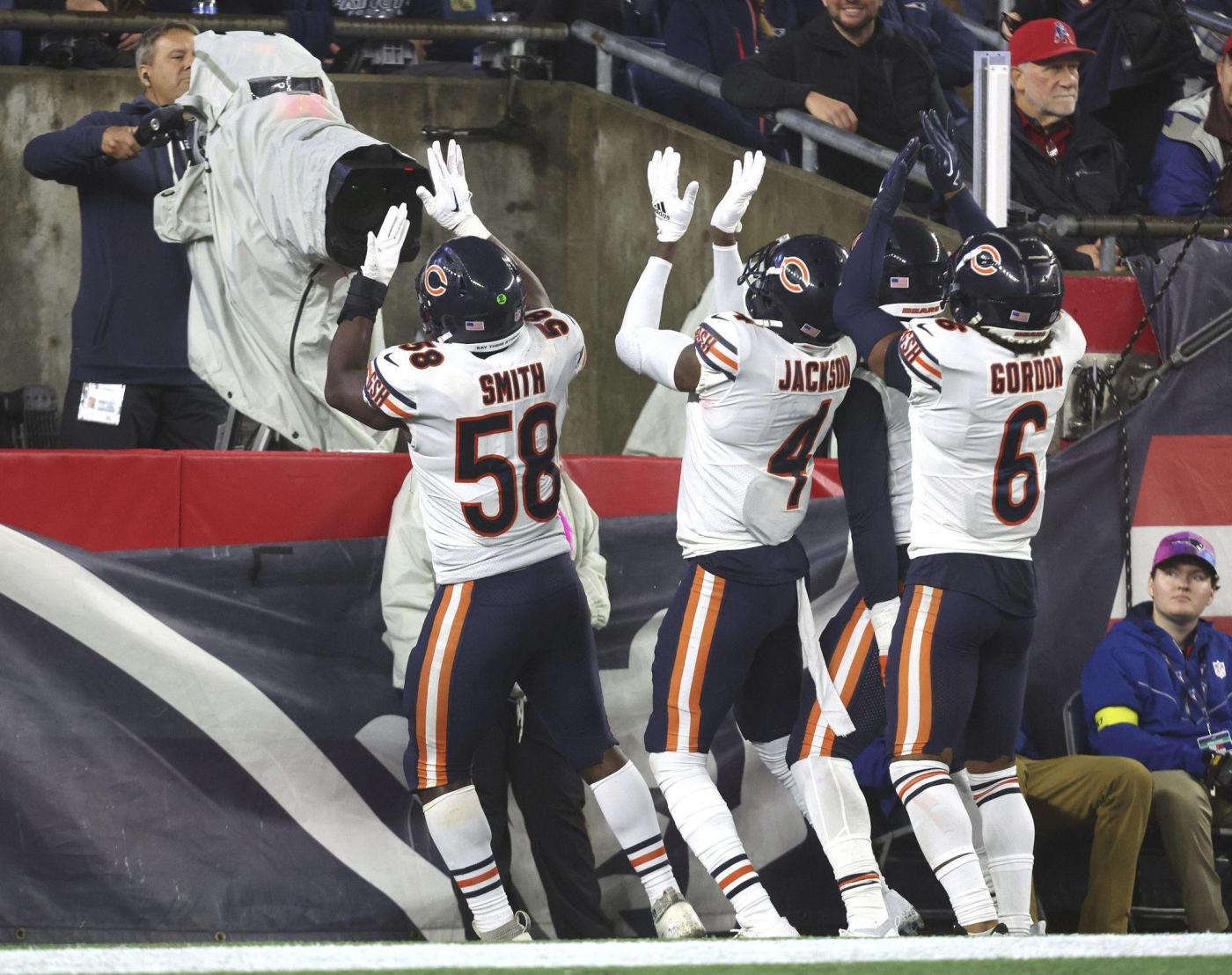 Sometimes life comes at you sliding with its cleats raised. And as hard as you may try to leap and dodge misfortune, a rogue spike might catch you right where you’d rather it not.

At that point, there’s a choice to make. Find a comfortable spot away from the chaos to curl up and whimper. Or come right back and try to make a statement.

It was Brisker who took a cleats-up slide to his, um, “area” early in the second quarter. And it was Brisker who responded three snaps later with an “I’m still here” interception off the owner of those cleats, Patriots quarterback Mac Jones.

Yep, Brisker confirmed, the physical discomfort that sent him staggering to the sideline for a moment was exactly what it looked like. “He slid and hit me somewhere I shouldn’t be hit,” Brisker said. “He caught me. You know what I mean?”

As for that one-handed pick, the first of Brisker’s career, on a pass down the right sideline to tight end Jonnu Smith a few moments later? With Smith and wide receiver Tyquan Thornton both running vertical routes to Brisker’s side, the Bears safety tried to position himself properly.

“I tried to split the difference,” Brisker said. “When he actually threw it, I was kind of surprised. I just capitalized.”

Consider that a microcosm moment. In a big-stage game set up to test what the Bears were made of on so many levels, Brisker and his teammates offered an attention-grabbing show of resolve and determination. And this time they complemented it with some game-winning playmaking.

That second-quarter takeaway was the first of three Bears interceptions and was made for the highlight reel.

Said Bears linebacker Roquan Smith: “When I saw it live, that one-handed (grab) and the way that dude did that, I was a fan. I was like, ‘What?’ I couldn’t believe it. I thought he was just going to knock it down or something. But, man, that was epic.”

Brisker, once an accomplished basketball player, had flashbacks to his hoops days.

“It felt like a rebound,” he said. “I went up, grabbed it and came down with it in one hand.”

On a night full of sparks, that was certainly one. And the big moments kept coming.

This was a four-phase victory: offense, defense, special teams, coaching.

Perfect performance? Nah. But it was certainly the most complete effort of the first seven games, a gritty showing from a group that hated the way its Week 6 prime-time loss to the Washington Commanders sat.

Eleven nights later, after a week-plus of refocusing and adjusting, the Bears handled just about everything that came at them.

They outgained the Patriots 390-260, held a 24-12 advantage in first downs and, in the final minute, took it easy on their hosts rather than trying to hang 40 on Bill Belichick and Co. by punching in a double-exclamation-point touchdown.

Inside a jubilant locker room, there was an obvious sense of satisfaction.

“This feels good,” quarterback Justin Fields said. “Everybody’s excited. I’m just proud of the way our guys came out and started the game and, of course, how we finished.”

Fields had arguably his most impressive outing of the year, throwing for 179 yards and a touchdown while adding 82 rushing yards and a 3-yard score. His running ability continues to be a dangerous weapon. The Bears turned him loose on a much higher volume of designed runs, not just waiting for him to make things happen as a scrambler.

“I thought that brought a whole different element to our offense,” Fields said.

Equally impressive was the manner with which the Bears responded to a blast of Zappe magic in the first half. Patriots rookie quarterback Bailey Zappe replaced Jones on the team’s fourth possession and within seven snaps led his offense to 14 points and a four-point lead.

Instead, these Bears gathered themselves, dug in and outscored the Patriots 23-0 the rest of the way.

After a 43-yard completion from Zappe to DeVante Parker and a 4-yard Rhamondre Stevenson touchdown run in the second quarter, the Bears immediately responded with a 75-yard touchdown march, capped by Fields’ 25-yard quick-hit pass to running back Khalil Herbert.

That started a streak of five consecutive scoring drives, an unthinkable feat in most weeks this season.

“That felt good,” Kmet said. “Man, it just felt like we were being really physical up front. I thought we out-physicaled them the whole night, which is really fun.

“When you’re able to get on a roll like that and you’ve got a bunch of guys touching the football, that’s a lot of fun. I think it’s definitely something we can lean into.”

Meanwhile, the Bears defense was doing its thing too. Smith snagged a tipped pass for his second interception this season. On the next series, rookie cornerback Kyler Gordon joined the pick party, breaking in front of Thornton and snaring Zappe’s pass with his right hand.

“Being able to get one (turnover) after another, it was pretty sweet,” Smith said. “Yeah, man. We’re very happy.”

That was all part of the Bears’ suffocating second-half submission hold as they methodically squeezed the life out of the Patriots and their fans. Best of all, they received the most gratifying reward as Gillette Stadium became remarkably quiet throughout the second half. No roars. No revolutionary cannon blasts. Nothing.

“It was pretty sweet how hushed it was,” Smith said. “After we were making those big plays, I was like, ‘Where are all the fans talking?’ But, man, it was like you could hear a rat (pee).”

“We took note of that,” defensive end Trevis Gipson added. “In that first half, this place was pretty rocking. But we kept playing with relentlessness and made a decision to write the story in the second half. We wanted to finish strong.”

As the Bears left New England, none of their players was making a grander-than-required big-picture interpretation of Monday’s victory. So much more will be needed from this group in the weeks and months ahead to reach any proverbial turning point.

But on one night, with the bright lights shining, the Bears believe they showcased what they are made of and what they are capable of becoming once they can find consistency.

Brisker, for what it’s worth, had a wide smile as he processed the night.

“If we keep rolling like this with everybody doing their job, we’re just getting warmed up,” he said.

It certainly felt like something positive to build on.