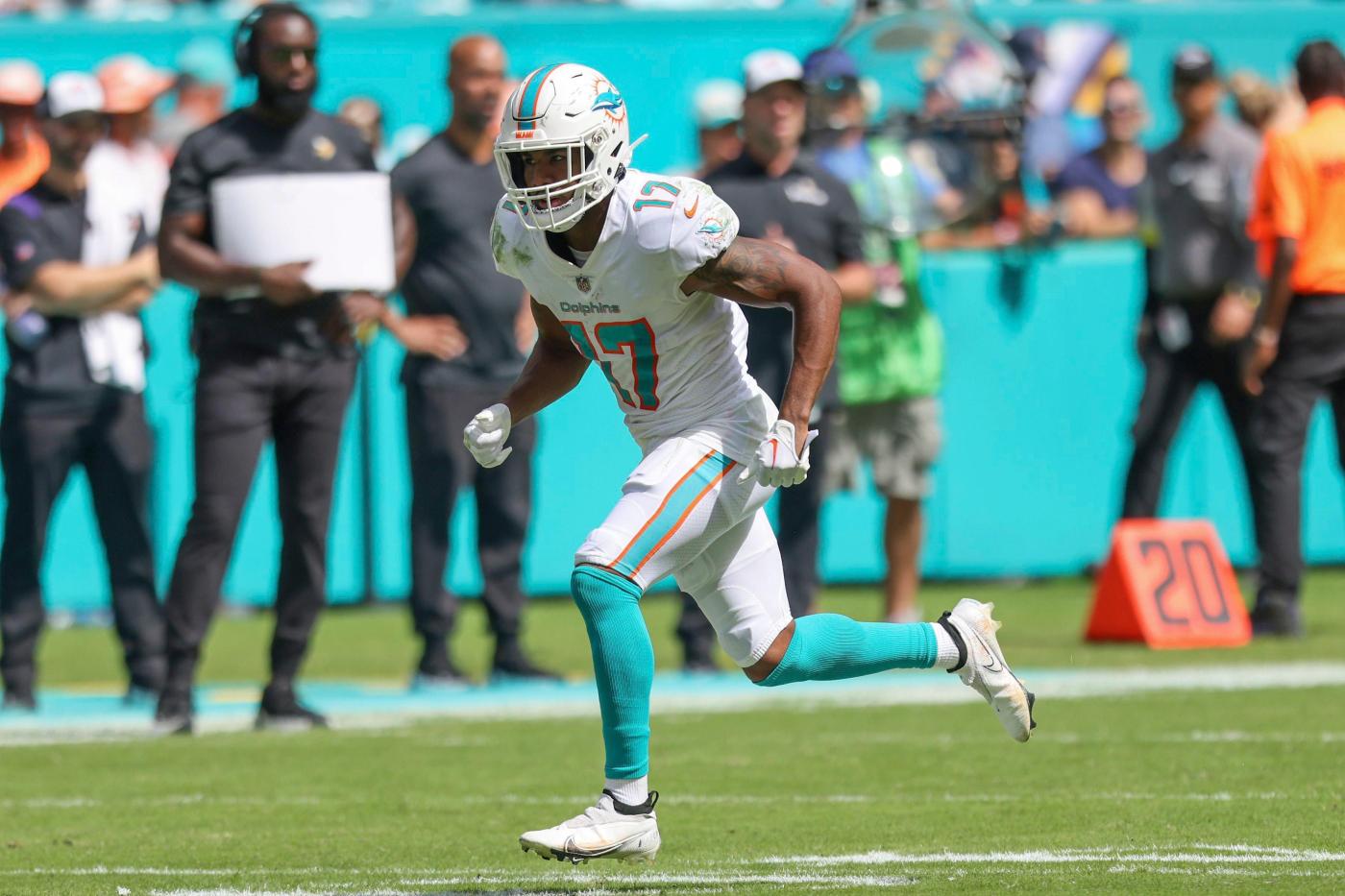 The Miami Dolphins have had quarterback, offensive tackle and cornerback injury concerns in recent weeks.

Add No. 2 wide receiver, who is top five in the NFL in receiving yards, to that list.

Jaylen Waddle’s status is in question this week ahead of the Dolphins’ Sunday night matchup with the Pittsburgh Steelers after he had an apparent shoulder injury late in the loss to the Minnesota Vikings last Sunday.

“I’m optimistic. I don’t expect to see much from him [Wednesday],” coach Mike McDaniel said ahead of the day’s drills. “He’s a tough competitor, a very tough kid. I’m very confident that, if he is able to [play], he will.

“He’s going to be working diligently. It’s important to him to play with his teammates.”

Waddle was indeed seen at Wednesday’s practice. McDaniel noted Waddle’s competitiveness in how he tries to push through injuries to play.

“You really have to be in front of everything with him and be his own voice of reason because he likes to push stuff,” McDaniel said, “and we like guys like that, because our medical staff can do their jobs and keep them out of harm’s way.”

Waddle ranks fifth in the league with 533 receiving yards. Teammate Tyreek Hill leads the NFL with 701 through six games.

With cornerback Byron Jones still not returning to practice this week while on the physically-unable-to-perform list and Nik Needham done for the season with his Achilles injury suffered against the Vikings, Kader Kohou (oblique) and Keion Crossen (knee) have injuries to monitor ahead of the Steelers game.

“They both really want to play,” McDaniel said. “They both definitely have a chance to, only because they’re really trying to will themselves.”

Kohou was spotted at Wednesday drills but Crossen was not.

On Monday, McDaniel called Crossen “one of the fastest healers that I’ve ever been around.”

Aside from All-Pro Xavien Howard, who has come back from groin injuries, third-year cornerback Noah Igbinoghene also had to play significant snaps against the Vikings. Special teamer Justin Bethel even played his first defensive snaps in the secondary.

“I’m always confident in the group we have just because they prove it to me every day,” McDaniel said.

The Dolphins’ defensive personnel concerns now extend beyond the secondary and have crept up to the front seven.

Defensive linemen Christian Wilkins and Emmanuel Ogbah and edge defenders Melvin Ingram and Trey Flowers were not seen at Wednesday’s session. Ogbah (back) and Flowers (foot) left Sunday’s game. Ogbah eventually returned, but Flowers did not. Ingram usually gets a veteran rest day on Wednesday.

Left tackle Terron Armstead again did not practice on Wednesday as he continues to recover from a lingering toe injury which kept him out against the Vikings. Right tackle Austin Jackson, who is trying to come back from injured reserve after missing five consecutive weeks with an ankle injury, also did not practice on Wednesday. With him now starting the second of three weeks he has to be activated since restarting practice, Jackson was not seen at Friday drills last week after participating Wednesday and Thursday.

Quarterback Skylar Thompson, who exited the Vikings’ loss with a thumb injury on his throwing hand, was not placed on injured reserve.

“That would be a good sign,” McDaniel said. “It was more positive than negative overall. It’s definitely not the worst case. … He’ll definitely get back into action sooner than later.”

Thompson left the game after taking a hit from Minnesota linebacker Jordan Hicks and having his hand bang against the helmet of Patrick Jones.

“If I break it, I’d be more than honored, I’d be thankful, I’d be grateful for the opportunity that God blessed me with,” Hill said of his record pace. “It would make me feel real good to do something like that. Just the magnitude of it for me, being drafted as a fifth-round draft pick, a lot of people labeling me as a return specialist, not being your traditional wide receiver.”

Hill had a new story to the players’ Ping-Pong table’s absence Wednesday.

Now Hill gets to train at home before deciding when the new table makes its debut in the locker room.