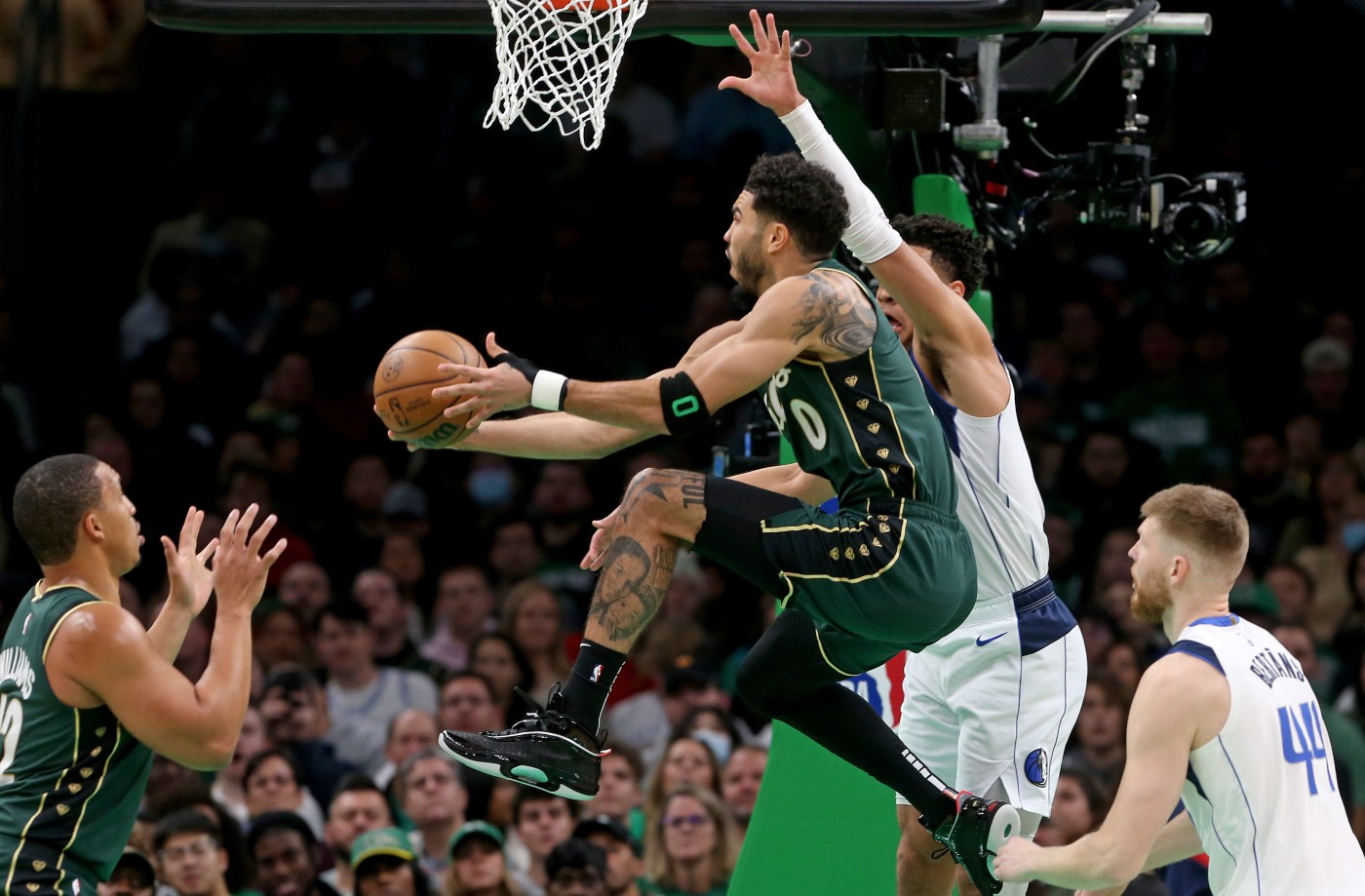 On Wednesday morning, hours before a highly anticipated tip at TD Garden, Jayson Tatum tested out his slightly sprained left ankle. He took stationary jumpers on the practice court at the Auerbach Center, then ran baseline to baseline several times to end morning shootaround.

Tatum, who hasn’t missed a game this season, was listed as questionable then. It wasn’t certain he would play until interim coach Joe Mazzulla confirmed it to reporters at around 5:45 p.m. But, according to Jaylen Brown, it was never really a question.

“He was gonna play,” Brown said. “He was playing. He knew who he was matched up with. He had that game circled, don’t let him fool y’all. He was playing the whole time.”

On the calendar? A date with the Mavericks and fellow MVP candidate Luka Doncic.

Tatum hurt his ankle in Monday’s loss to the Bulls but iced it in the 48 hours in between games to keep the swelling down. Then – once again – with the brightest lights turned up on another big stage on national TV, he added to his early MVP case by beating another candidate in his way.

Doncic was nearly unstoppable as he scored 42 points and dished out nine assists, but Wednesday was the latest reminder that Tatum’s surrounding cast is far superior and he’s the driving force behind it. Tatum scored 37 points and pulled down 13 rebounds, Brown added 31 points and four other Celtics scored in double figures in a 125-112 wire-to-wire victory over Doncic’s Mavericks.

Tatum didn’t let “a little sprained ankle,” as he described it, stop him from producing another signature performance as the Celtics bounced back emphatically from Monday’s winning streak-ending loss to the Bulls.

“His durability, his ability to answer in the moment, his ability to be a great teammate and make other people around him better and celebrate when the team is playing well,” Mazzulla said of Tatum. “You can count on him to play every night and so it’s great.”

Though it may have been uncertain at one point if he would even play on Wednesday, Tatum made sure to put his stamp on this victory.

Tatum helped close a dominant first half during an MVP-like sequence in which he hit a 3, blocked a Spencer Dinwiddie try and then was fouled on a 3 all in the same sequence, which generated “MVP!” chants from the crowd while he was at the line.

But his biggest highlight came in the fourth quarter. The Celtics, fueled by another dominant offensive display, led by as many as 26 before Doncic sparked a rally in which Dallas cut it to nine. That’s as close as the Mavs got, in large part thanks to Tatum. He found Al Horford for a 3 to restore the lead to double digits. On their next possession, he used a Grant Williams screen to get through the defense for a dunk, and after Doncic turned the ball over, Tatum went back to the free throw line for his 14th and 15th attempts of the game, where the “MVP!” chants grew even louder.

Then, he sealed the game on defense. After being switched on to him, Doncic found a line to drive on Tatum, but the Celtics wing met him at the rim for a block. Tatum appeared to yell something in Doncic’s direction as the Celtics went the other way, where Brown drilled a 3 to make it a 17-point game.

“We joked about it,” Tatum said of his exchange with Doncic. “I told him I had to block it because I didn’t want him to dunk on me. He looked at me and was like, ‘You thought I was going to dunk it?’ I was like, ‘You never know. You’re tall enough where you can play above the rim a little bit.’ Obviously, one of the best players in the league. A special talent. Somebody I respect. Just like competing against a guy like that.”

He certainly does. The calendar hasn’t yet turned to December, but Tatum has now beaten three MVP candidates from the Western Conference to begin the season. He outdueled Ja Morant in Memphis, took care of the Nuggets and two-time reigning MVP Nikola Jokic, and on Wednesday, he bested Doncic, who had become a thorn in his side after the Mavs beat the Celtics four consecutive times prior to the matchup.