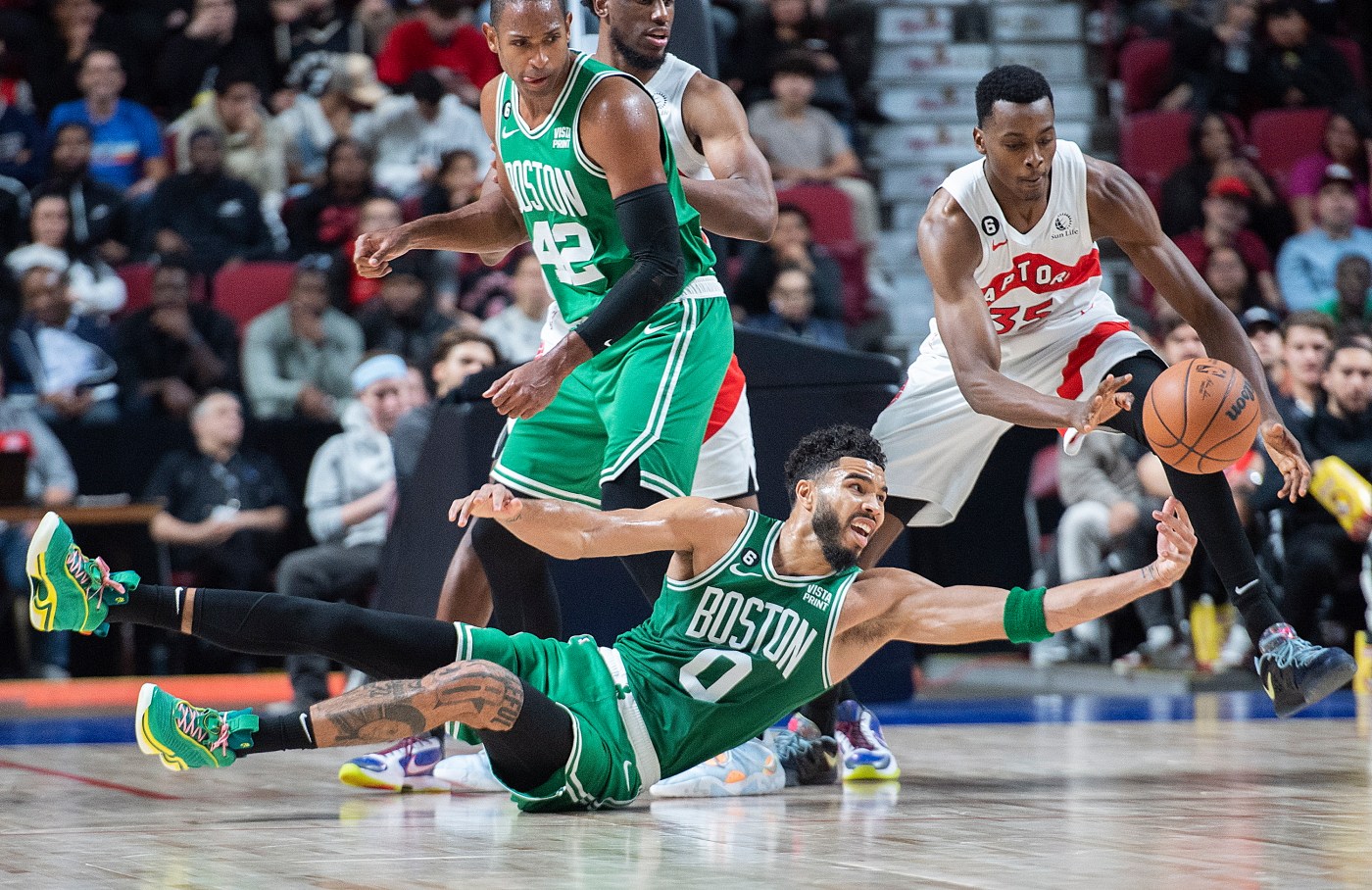 With the season opener four days away, Joe Mazzulla wanted to treat Friday’s preseason finale like a regular season game, a trial run as he continued to figure out rotations and minutes for his regulars.

On a strange night at a buzzing Bell Centre in Montreal, the Celtics coach got a good test but was probably glad it was just a tune-up. Jayson Tatum was given a rare preseason ejection, Malcolm Brogdon left the game hurt and the Celtics couldn’t overcome O.G. Anunoby’s 32 points and Scottie Barnes’ 25 in a 137-134 overtime loss to the Raptors, though Mazzulla has plenty to process before Tuesday’s opener.

“I feel like we’re really prepared. I think we know what will make us great and what will hurt us. So it’s just a matter of making sure that we don’t beat ourselves, making sure that we take advantage of opportunities that are available for us and play with one another consistently. We look good out there most times, so we just have to finish plays, finish defensive rebounds. Teams are going to try and punish that, so we just have to be more physical. Be the more physical team.”

– Because Mazzulla was treating Friday like a regular season game, it seemed likely that Tatum would play in the fourth quarter. But the world will never know now.

With less than a minute to play in the third quarter, Tatum – who had already been assessed one technical foul earlier in the period – picked up a routine personal foul but picked up his second technical foul and was ejected after appearing to wave off an official sarcastically. That kicked off a confusing sequence in which Williams also got a technical and the Celtics were given another technical for a delay of game because Tatum didn’t leave the floor right away. The Celtics were leading 98-93 but after the dust settled, the game was tied following five free throws by the Raptors.

“That’s what the preseason is all about. You have to learn and understand your mistakes, and I think that’s something that we’ll improve on and not carry over into the regular season.”

Tatum was having a good game to that point. After scoring two points in the first quarter, the C’s star went off for 13 points in the second on some hot shooting and strong drives to the basket. He finished with 21 points, nine rebounds and five assists.

– Mazzulla played a nine-man rotation for the first half and most of the third quarter as his expected regulars for the start of the season came into focus. Tatum joined Jaylen Brown, Derrick White, Marcus Smart and Al Horford in the starting lineup while Brogdon and Williams were the first to come off the bench before Sam Hauser and Blake Griffin as the C’s went with small lineups for long stretches.

Payton Pritchard didn’t enter the game until there was 1:34 remaining after Brogdon left the game.

Brown – who led all Celtics with 33 minutes – finished with 23 points on 9-for-15 shooting as he completed his strong preseason on another high note. Tatum played 29 minutes before his ejection, while Smart also played 33 minutes, White played 26 minutes and Williams played 30 minutes off the bench.

– If White is going to shoot it like this, the Celtics are going to be even harder to stop offensively.

White earned his fourth start in four preseason games – making it seem likely the guard will take Rob Williams’ spot in the starting lineup in the center’s absence to begin the season – and he continued his strong preseason. White went 4-for-4 on 3-pointers in the first quarter and made his first five attempts from long range before finally missing one in the third quarter. White worked on his shooting form in the offseason and it’s already paying off. And surrounded by Tatum and Brown, he’s certain to get plenty of good looks.

– Rebounding continued to be an issue for the Celtics, especially when they went to smaller lineups. That was apparent on their first defensive possession of the game, when they gave up two offensive rebounds before the Raptors took a 2-0 lead. The C’s were outrebounded 56-44 on the night as the Raptors secured 22 offensive rebounds.

– The Celtics announced at halftime that Brogdon would not return to the game due to a sore right leg. Mazzulla said after the game that he was removed for precautionary reasons. The point guard, who has a history of health issues, was having another strong game as the Celtics’ sixth man with eight points and a pair of assists in the first half.

– Luke Kornet was available on Friday night but did not play as he recovers from an ankle sprain.