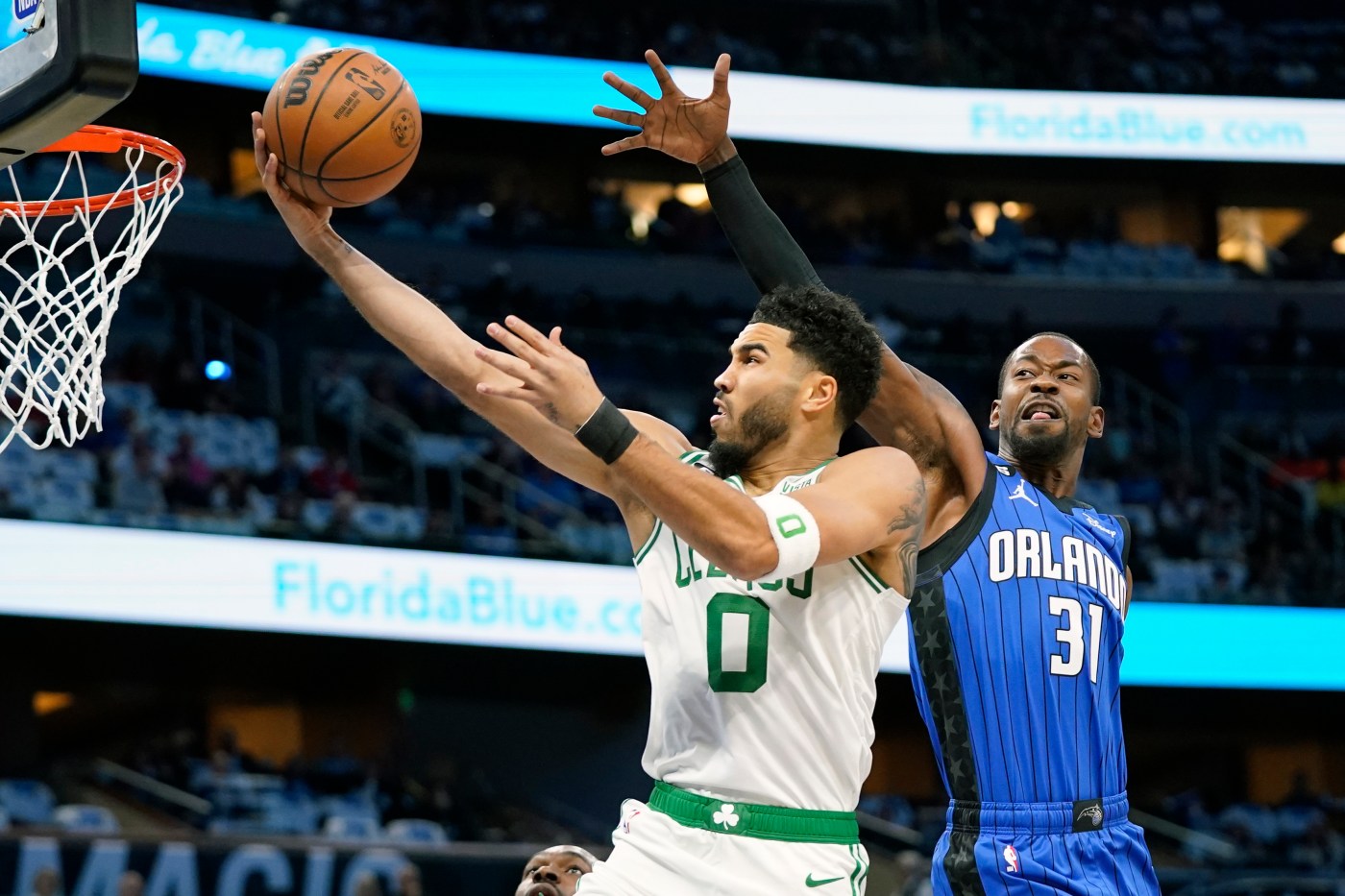 As he walked off the court at Orlando’s Amway Center on Saturday night, a large crowd of Celtics fans waited for Jayson Tatum above the tunnel. The Celtics star acknowledged them, raising his arms in the air.

Some of the fans were chanting “MVP!”

It’s certainly far too early in the season to be having serious MVP conversations, but through three games – all Celtics victories – Tatum may be setting the foundation for an MVP-caliber season.

A year after his first career All-NBA first team selection, Tatum is off to a hot start this season, and after scoring 40 points in the Celtics’ 126-120 win over the Magic, he made franchise history. His 104 points through three games is the most by any player in Celtics history, topping Larry Bird’s 96 in 1984-85.

As the clear-cut No. 1 option on a championship-level team, Tatum will certainly play himself into the MVP discussion if he keeps playing like this and the Celtics continue winning. That’s not lost on him, even if it’s still just October.

“It’s early and honestly, it’s always been a goal of mine since I was a kid,” Tatum told reporters in Orlando. “Getting to the NBA wasn’t just what I wanted to do. I wanted to be a champion, reach all those accolades and accomplishments, and MVP is obviously at the top of that list. But I’ve said it a million times and I’ll say it a million more times, all I’m concerned about is getting back to the championship and getting over that hump.

“They kind of go hand in hand, right? If we get back to the championship or one of the best teams, it means I’m probably playing at a high level and everybody else as well, and all the individual accolades will come like they did last season for all the guys. So, not necessarily MVP mindset, but just compete, be the best I can be, try to add value to winning every night and go out there and do what I do.”

Tatum is notoriously a slow starter – something he joked about in the preseason after he had a poor shooting performance – but he has flipped that script in the opening week of the season after finally having a summer to recover and refocus.

Tatum worked on driving and finishing through contact this summer, and that emphasis has shown up already with several strong moves and plays at the rim and efficient scoring performances. He’s shooting 54.8 percent from the floor and getting to the free throw line eight times per game, and he hasn’t done it against nobodies; Tatum hasn’t been afraid to attack the rim against the likes of Joel Embiid or Bam Adebayo.

Tatum said after the Celtics’ season-opening win over the 76ers that health is a major factor for feeling strong at the beginning of the season. He dealt with a small left wrist fracture during the Celtics’ playoff run last season that’s fully healed. This summer was the first one he’s had in years that allowed him to fully recover after barely having a break from basketball since the start of the 2019 season. But he’s also stronger mentally as he enters his sixth season, knowing how to read the game better. Though he’s only 24, Tatum has almost seen it all, especially after a challenging run to the NBA Finals.

“I know how hard it is to score in the playoffs and the Finals and everybody;s focusing on you,” Tatum told reporters. “Being quite honest, you realize that the regular season, it’s not as intense, and there’s a little more mishaps on defense from the other teams and things like that. … It’s kind of reading the game and going into it with that mindset where in past years, I wasn’t thinking and advanced as much. I’m still young, but I’ve played a lot of basketball, so I kind of know how the flow of the game goes.”

Tatum is clearly on a mission after a summer of constant reminders that he lost in the NBA Finals, which he reiterated after Saturday’s win. His focus is on winning a championship after coming two wins short. Thus far, it’s coming with MVP-like performances.

“I’m happy to just be back playing basketball after the summertime and losing in the Finals,” Tatum said. “All I could think about was just getting ready to be playing and start a new chapter. I’ve said it a million times that it was a long, miserable summer, so I just wanted to get back out here and compete and just try to win. I don’t care how many points I score, I just want to get back to that point, so I just try to come out here and win every game we can.”