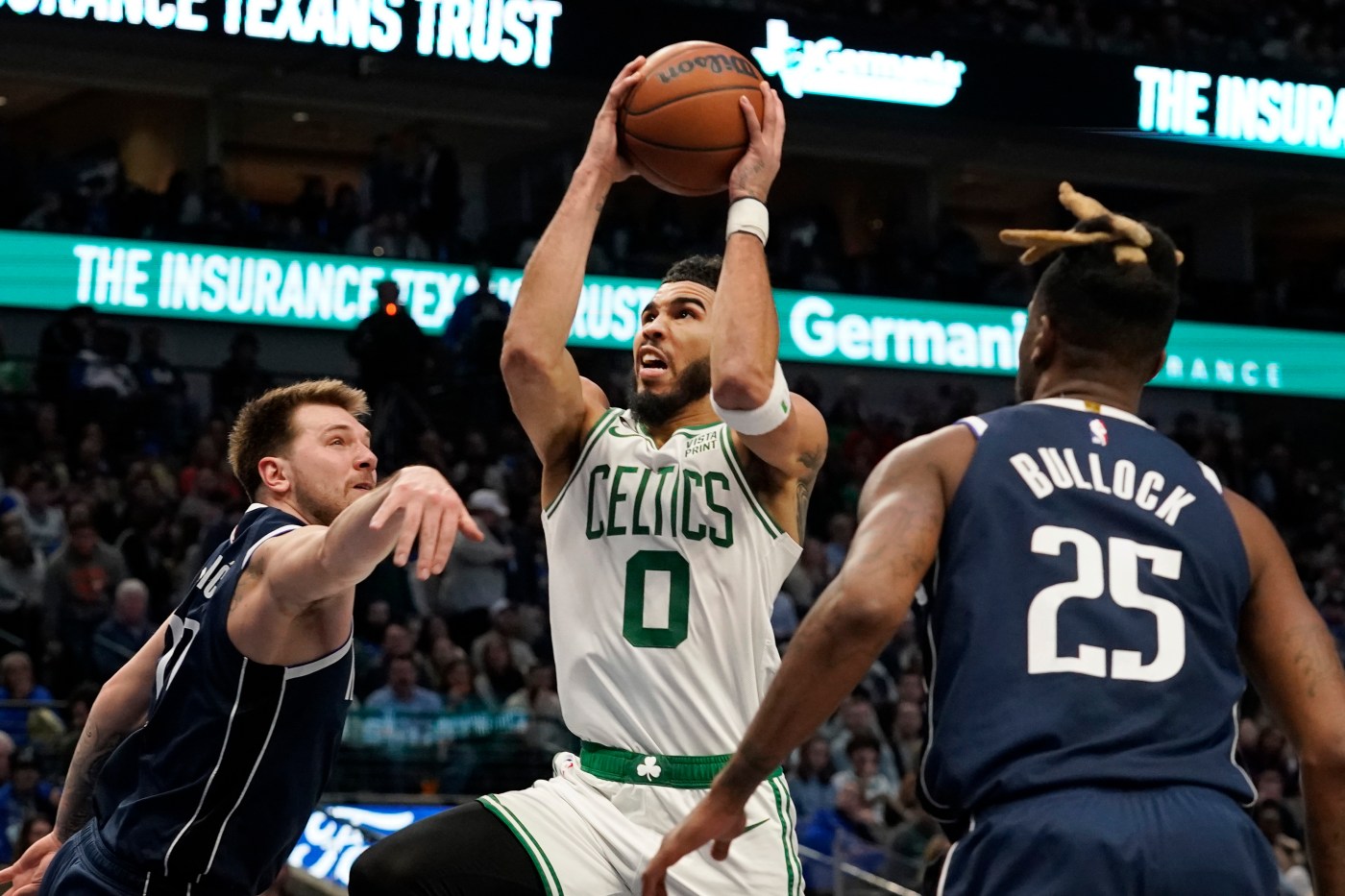 The Celtics knew Tuesday’s blowout loss to the Thunder was embarrassing, inexcusable and unacceptable. Two nights later, they responded with one of their better performances of the season.

With the national spotlight back on, the Celtics put the ugliness of Tuesday night in Oklahoma City well behind them and submitted a complete effort reminiscent of their unstoppable November. Jayson Tatum produced another signature, MVP-type performance with the second triple-double of his career – 29 points, 14 rebounds, 10 assists – as the Celtics bounced back and took easy care of Luka Doncic’s Mavericks with a 124-95 victory.

Doncic had one of his worst games of the season with 23 points on 7-for-23 shooting with only three assists while looking limited because of some early ankle discomfort. The Celtics produced their second-largest margin of victory this season with the 29-point win and snapped the Mavericks’ seven-game winning streak in the process.

“I think it speaks to our maturity,” Malcolm Brogdon told NBC Sports Boston. “I think some nights like OKC, our maturity lets us down a little bit, but when we play the best, we really do beat the best. We bring our best performances against them, but we have to do this consistently, night in and night out.”

Unlike the first two games of the trip, the Celtics – motivated by what unfolded in Oklahoma City – played with more energy, effort and urgency from start to finish on Thursday night on both ends of the floor. But they did have to fight through some early adversity to get there.

Tatum, Jaylen Brown and Derrick White were each whistled for two early fouls in the first quarter. Tatum, despite his strong night, started slow because of it and didn’t have the best shooting performance as he finished 8-for-22. Brown never really found a rhythm because of foul trouble throughout the night. But their supporting cast stepped up.

Brogdon and Grant Williams each entered the game earlier than expected but fueled the Celtics as they overcame foul trouble to their stars. Their play sparked Boston’s second unit to a 27-11 run as the C’s took control of the game in the second quarter behind a strong defensive effort and a hot shooting night, which has been rare recently.

“That’s kind of what we are,” Mazzulla told reporters in Dallas on the team’s complete effort beyond Tatum and Brown. “That’s when we’re at our best. We have that balanced attack and our bench guys are playing with confidence, with poise, with aggression on both ends of the floor. It goes back to, we’ve seen the best version of ourselves. We’ve done it for a good amount of time. Can we continue to do it over and over again? …

“I think we had the intention to fight for the greatest shot. I think our offense and our spacing and our personnel allows us to get really good looks, but I thought we fought for great looks and that’s something we can continue to work on as well.”

The Celtics pulled away in the second half and led by as many as 28 as Tatum scored 18 of his 29 points. He scored just four points in the first quarter and missed 11 of his first 16 shots, but stayed locked in and impacted the game in other areas before heating up with 13 fourth-quarter points to put the game away. He notched his triple-double late in the fourth on a feed to White.

Tatum – who came in fourth among Eastern Conference frontcourt players on Thursday in the first fan vote for the All-Star Game – is now 8-2 against other top MVP candidates this season, with two wins over Doncic.

The Celtics did a masterful job slowing down his counterpart. Doncic had averaged 44.5 points per game in his last six games entering Thursday but had one of his least impactful games. Mazzulla said Brown asked to guard Doncic, and the rest of his teammates took on the challenge to stop him.

After giving up 150 points – tied for the second-most in franchise history – on Tuesday, the job the Celtics did on Doncic contributed to one of their best defensive efforts of the season as the Mavs shot 38.7 percent.

The Celtics are certainly happy with the effort they put forth Thursday, but they know they have to bring that more – especially against inferior opponents. To that point, Saturday’s game against the Spurs – who are second-to-last in the West – will be a good test to see if they’ve taken that lesson seriously.

“We proved that we can beat the best, but we have to do it consistently,” Brogdon said.