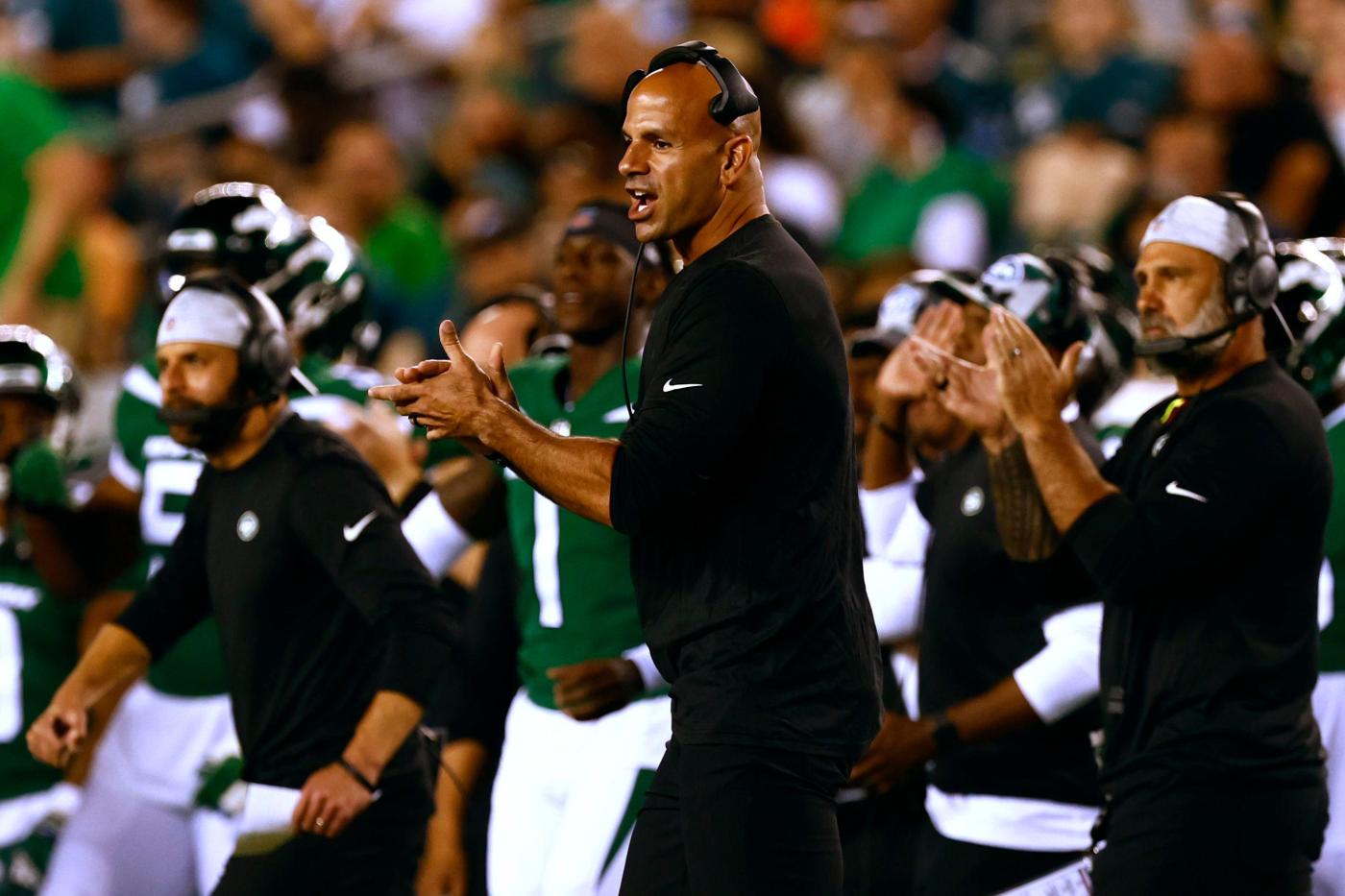 It appears that could once again be the case for Gang Green’s second preseason game against the Atlanta Falcons Monday night.

“I’m torn on it,” Saleh said after Saturday’s practice. “I wake up one day and ask do I play them and I wake up the next day and decide I’m not going to play them. I think there’s tremendous value in this one and it is different because it’s Monday Night Football. We are such a young team and a lot of young guys — that’s what they dream of, Monday Night Football.

“You never want to make a game bigger than it needs to be, but there’s still that human aspect of how they grew up and how people view Monday night as that’s the only game on and all your peers are watching. It’s a perfect opportunity to give our guys to go through the mental aspect of a heightened environment so they can manage Week 1.”

As with any preseason game, there’s always the risk of starters suffering an injury. That’s exactly what happened during the first preseason game against the Eagles.

Quarterback Zach Wilson suffered a bone bruise and meniscus injury while scrambling during the first quarter. Although the damage isn’t as severe as some predicted, Wilson could miss the season opener against the Baltimore Ravens after surgery to the right knee this week.

Like many teams in the league, the Jets have scheduled joint practices with the idea of evaluating players better than they could during a preseason game. During the last two days, the Jets’ first, second and third teams participated in 7-on-7 and 11-on-11 drills with Friday being a padded practice.

Many first-round picks automatically get placed as a starter quickly after being drafted.

With the Jets’ defensive line being one of the team’s deepest units, that isn’t the case for Jermaine Johnson. However, becoming a starter is the least of Johnson’s concerns right now as he’s focused on improving from practice to practice.

“However, I can help the team, that’s how I look at it,” Johnson said. “I practice like I’m a free agent anyway.

“I practice like I’m fighting for my life, that’s how I am and that’s how I practice. It just lines up perfectly with what Coach Saleh is all about. Practicing hard, balls to the wall and give 110% with not only yourself but with the team.”

Johnson has been disruptive during the last two practices against the Falcons. On Friday, he registered a sack on Atlanta quarterback Marcus Mariota, and a day later, Johnson recorded a sack on Desmond Ridder.

The Jets coaches have been impressed with Johnson’s detailed improvements since being drafted in the spring.

“I love the way Jermaine has attacked practice,” Saleh said. “Football for these guys is so easy throughout college that they have to figure out a new way to practice. There’s a level of skill and a level of professionalism that takes place on the practice field with effort and working on their technique.

“His mental makeup, his athleticism, his hand-eye coordination, all that stuff is awesome. It is going be a matter of time before he ties it all together.”

JOYNER BACK, WILLIAMS STILL OUT

Jets safety LaMarcus Joyner returned to practice after missing the last week due to an illness. He participated in team drills with the rest of the team.

The same could not be said about defensive lineman Quinnen Williams as he is still dealing with an ankle injury he suffered last week. Joining Williams was defensive lineman Bryce Huff and tackle Duane Brown as they also worked with trainers throughout practice.

Saleh says he hopes to have Brown practicing with the rest of the team after Monday night’s preseason game.