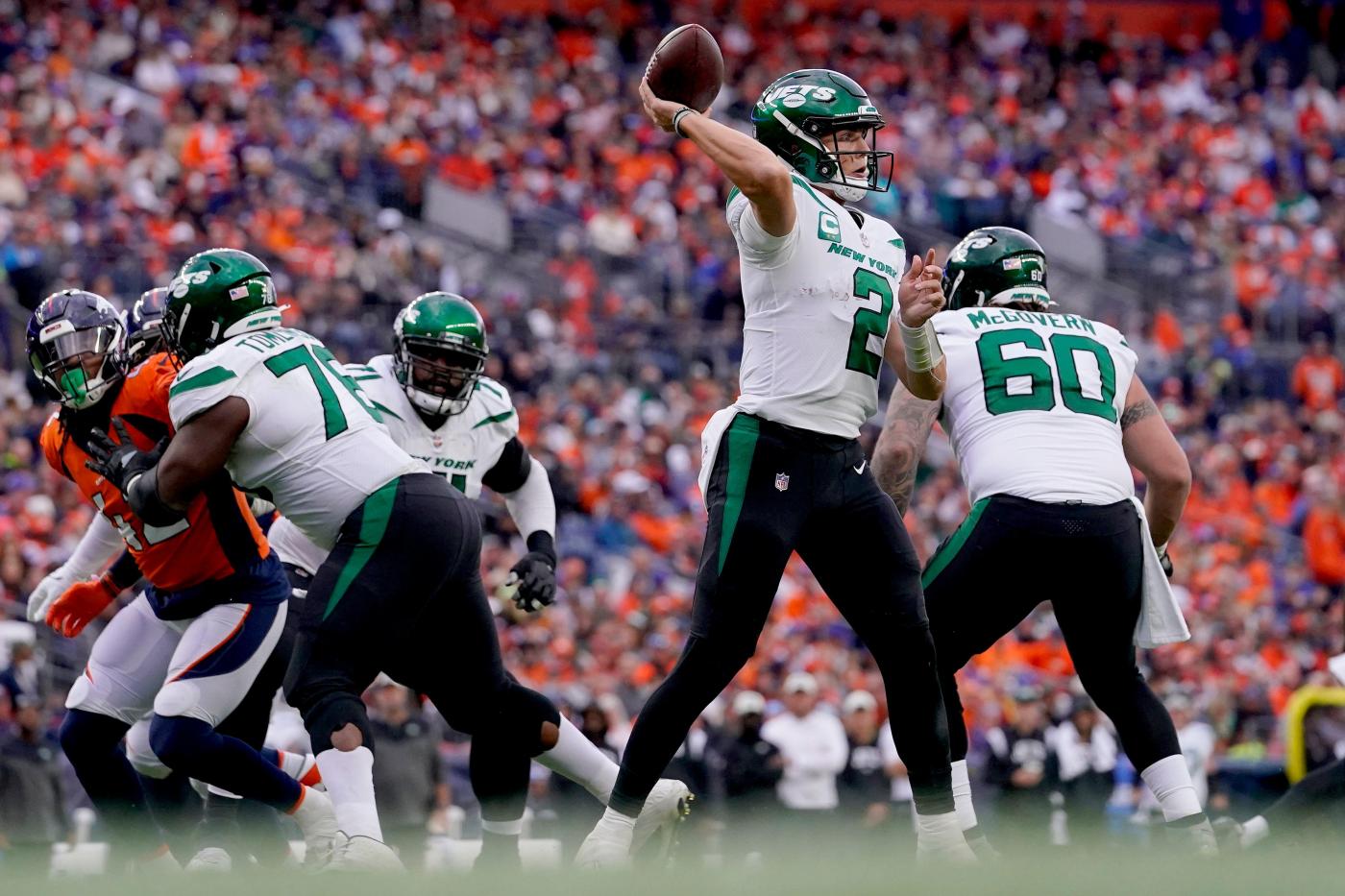 That is significant because now he’s played the equivalent of an entire season of games in the NFL.

Where would Jets offensive coordinator Mike LaFleur assess Wilson at this point?

“He’s just getting more and more comfortable,” LaFleur said. “It’s again not to over-talk about, but that was a tough defense that we just went against, I believe that was their fourth home game and their points that they’ve given up were nine, 10, and 12 going into that and we got 16.

“It’s not near good enough and we as an offense, we know we left a lot, we felt like we left a lot out there, but ultimately in two-minute situation and then some other situations where we didn’t turn the ball over, that was playing team ball and that’s something that he’s just learned. He knows when to take his chances, when not to take his chances within a game, he’s getting more comfortable playing the game within the game.

“So I would anticipate that it’s just going to continue to grow and again, if you go back to four weeks ago versus Pittsburgh where we were down by 10 in the fourth quarter, him and the rest of the guys did what they had to do to find a way to get a W. So like I keep preaching to the guys we can play any game, we can play any game necessary, we’ve proven that over four games, we want to get more consistent, but they can play any game.”

Wilson has had an up-and-down career during his first 17 games. He has thrown for 3,027 yards, 10 touchdowns and 13 interceptions. He has also dealt with a few injuries during his two seasons in the league. That includes the meniscus tear and bone bruise during the preseason that kept him on the shelf for seven weeks and caused him to miss the first three games of his sophomore campaign.

Since returning from injury, Wilson has passed for 693 yards in four games, but only one touchdown (vs. two INTs). The Jets have won all four of Wilson’s starts, but the passing game has yet to be in sync the way many had expected.

After passing for a touchdown in his first start of the season against the Steelers on Oct. 2, Wilson has gone without a TD pass in his last three games. Also, the Jets recently lost their best threat offensively to a season-ending injury.

Running back Breece Hall, who leads the team in scrimmage yards with 641 yards and four rushing touchdowns, tore his ACL against Denver and will miss the rest of the season. Even with Hall in the backfield, there was a question of if the Jets needed to find a way to open their passing attack.

With Hall no longer an option, Gang Green could be forced to go to the air more.

“I would say whether Breece is here or not, we need more out of the passing game,” Wilson said. “We’re leaving some plays out there on the field.

“We just need to be able to execute and go out there and do our offense. I feel like we’re in a good spot, and everyone is feeling confident. We’re winning games. In the pass game, we would like to be more efficient regardless of if Breece was here or not.”

Although they lost to the Bears 33-14 in Foxboro last Monday night, the Patriots are still one of the better teams against the pass. New England is allowing just 208.3 yards per game through the air. The Patriots defense is also tied for third in turnovers (13).

“New England has forever been a team that just feasts on your mistakes,” Jets coach Robert Saleh said. “The reason why they are such a good ball-hawking defense is because I’ve said it before, they’ve been coaching that system for what seems like a hundred years.

“They know every single detail and the players are so well-coached because of all the detail that goes into what they coach, and they can anticipate and they know how teams are going to attack them, and they can just, they can be opportunistic, so you’ve got to be very ball conscious as an offense to make sure that you’re not giving them freebies.

“So, that’s always going to be the challenge when you play New England, the more comfortable you are in a system, the more you can cheat, knowing what their weaknesses are. And you see it all on their tape, they’re again, very well-coached, they’re very disciplined, they play fast, and they do a really nice job.”