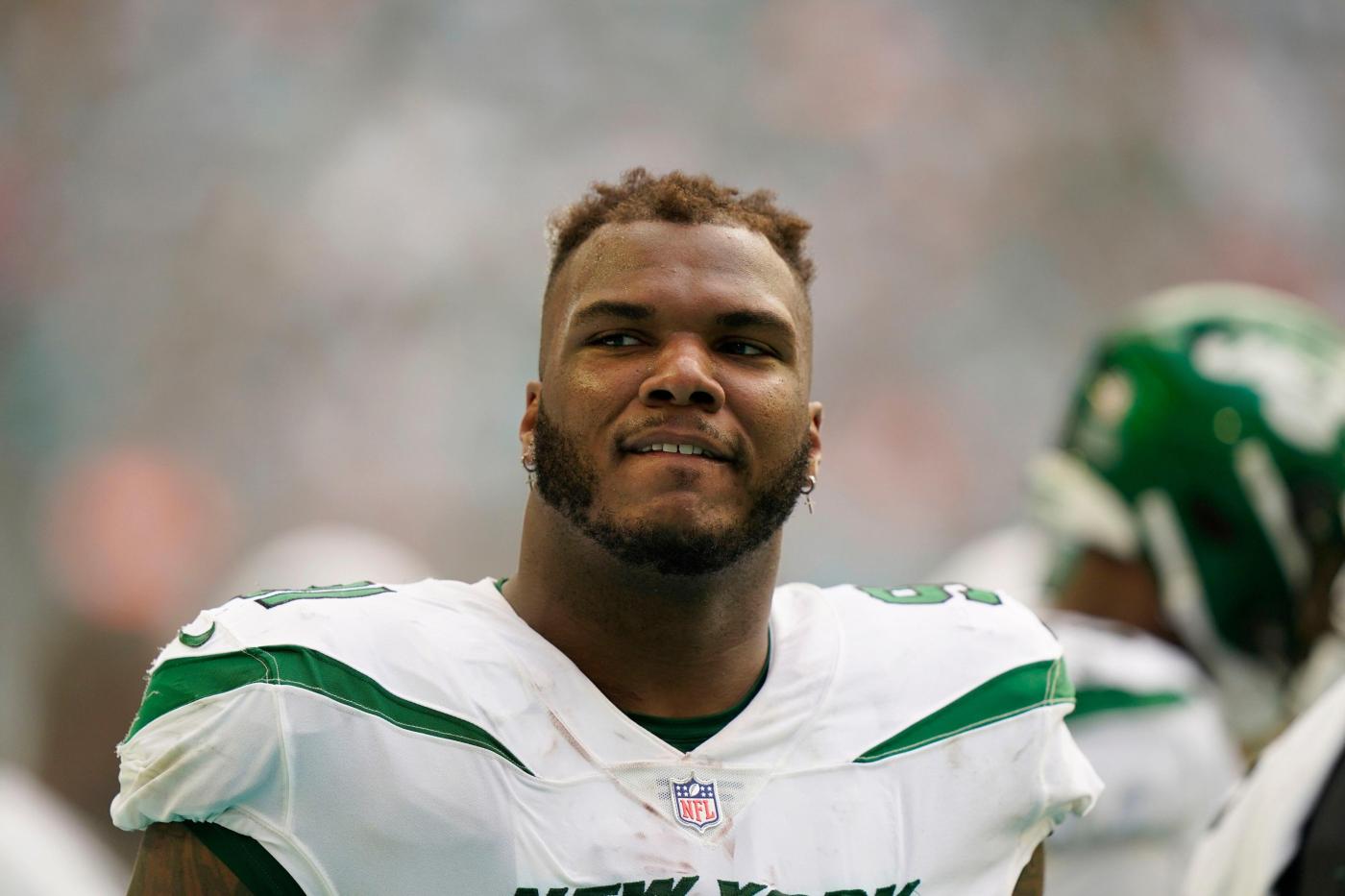 Throughout October, the NFL and the American Cancer Society have worked together to support the fight against cancer through its Crucial Catch campaign.

Jets defensive end John Franklin-Myers is also doing his part to bring awareness to cancer while honoring his grandfather in the process.

Franklin-Myers is partnering with former Jets defensive linemen Marty Lyons and his foundation to raise money to grant a special wish for Luna Perrone, a 10-year-old from Palm Beach Gardens, Florida. Perrone is batting Ewing sarcoma is a rare type of cancer that occurs in bones or the soft tissue around the bones.

Franklin-Myers is raising money through his performance this season to grant Perrone’s wish of having a soccer field in her backyard. The fifth-year player will donate $1,000 for each sack and $50 for each tackle.

“Just an opportunity when you think about the Marty Lyons Foundation and what they do in helping people grant wishes,” Franklin-Myers told the Daily News. “What an opportunity it is to help somebody and to help him build his foundation. It kind of worked hand in hand as I want to help people and kids but at the same time, have an opportunity to work with Marty Lyons.”

“Growing up, I didn’t have a lot of things. It is just something to have the opportunity to help her build a soccer field in her backyard. So I donated, anything I can do to help her is what I’m going to do.”

Raising money for the Marty Lyons Foundation and the Sarcoma Foundation of America is near and dear to Franklin-Myers’ heart. His grandfather Billy Ray Myers, died in 2011 from sarcoma.

After he was born in Los Angeles, Franklin-Myers moved to the Dallas area as a kid and was adopted by his grandfather, who took him and his sister out of foster care.

Franklin-Myers’ grandfather gave him stability, something he lacked earlier in his life. Not only did Franklin-Myers have a place to stay, but he had someone who pushed him to be his best, whether on the football field or in the classroom.

“You see some people get in trouble especially going what we went through with my mom passed,” Franklin-Myers said. “We went to foster care and you are just a statistic at that point and another person in the system.

“To have him and to change that and to change what we are used to and have a change of scenery. When we got to Texas, he was like, no sweets, no fat foods, no fried food, and we cooked everything. I was like, ‘nah, I want donuts and candy.’

“Just dealing with that and going through that makes you a better person. Being around that and around someone that really cares about you, it helps you become a man. It also helped me become a better person.”

Billy Ray Myers never saw his grandson play a snap in college at Stephen F. Austin or the NFL. However, Franklin-Myers honor’s him not only by hyphenating his last name but by continuing to give back to the community.

“That’s the reason why I worked with the Sarcoma Foundation of America because he died from sarcoma,” Franklin-Myers said.

“So it is big on me to raise awareness because he went through it for so long and they couldn’t detect it and they didn’t realize what it was until it was pretty much too late. It is big for me and anything I can do to use my platform to raise awareness.”

The 2022 season couldn’t be going much better on the football field for Franklin-Myers and the Jets through the first seven games. He has helped the Jets to a 5-2 record as they’re currently the fifth seed in the AFC with 10 games left in the season.

He has 14 tackles and 1.5 sacks, Franklin-Myers’ leadership has helped the Jets in other areas that don’t show up on the stat sheet.

“He probably deserves a lot more than what he’s getting,” Jets defensive coordinator Jeff Ulbrich said. “He’s a guy that’s just so versatile. Last year just because of our situation, he had to rush outside because of all the injuries that we had out there.

“Finally, we’re getting an opportunity to play him more inside. I really believe that that’s his superpower, the ability to rush on third down reduced as a three-technique or an interior tackle, so it just brings us great versatility, he’s a great pass rusher, and really our first, second down doesn’t get enough credit as a really strong edge run defender, so he’s bringing both of those things to us.”

In 2018, the Los Angeles Rams drafted Franklin-Myers in the fourth round. That allowed him to rub shoulders and learn from defensive linemen Aaron Donald and Ndamukong Suh, who Franklin-Myers has compared Williams’ play to this season.

“You turn the tape on and he’s in the conversation with the ADs [Aaron Donald], [Chiefs defensive tackle] Chris Jones, [Eagles defensive tackle] Fletcher Cox and even [Ndamukong] Suh in his heyday. Some of the best three-technique that have played. Credit to him, credit to his offseason and what he has done. He still has a long way to go and a lot of learning and he wants to learn and wants to help other people. Totally unselfish, can’t say enough good things about guys like that as he wants to be better and wants to be better for the team.”