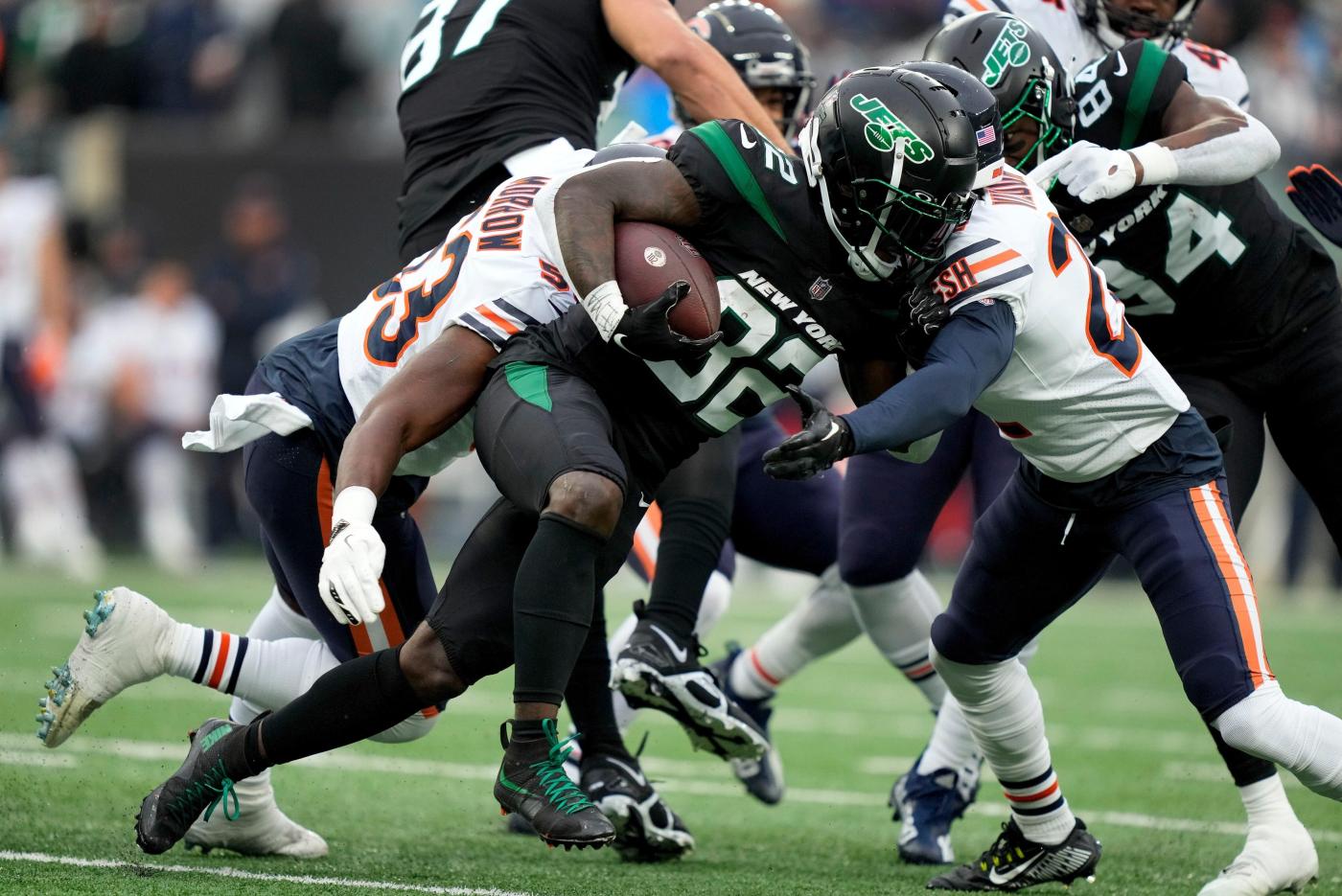 Heading into a critical game against the Vikings, the Jets will likely be without their starting running back.

Michael Carter, who has missed practice all week, is doubtful to play against Minnesota. The second-year back injured his ankle in the third quarter of last Sunday’s 31-10 victory against the Bears.

If Carter can’t go, the Jets will rely more on Ty Johnson and Zonovan “Bam” Knight, who both were featured heavily against Chicago. Knight led the Jets in rushing with 69 yards on 14 carries. Johnson also chipped in with 62 yards and a touchdown on five carries.

It seems like no matter who has been in Gang Green’s backfield this season, they’ve had success running the football. Breece Hall was the team’s leading rusher early in the year, but he was lost for the season due to an ACL injury he suffered against the Broncos on Oct. 23.

“Our room is really deep,” Jets running backs coach Taylor Embree said. “Ty, credit to him, last year he was the main third down guy and getting passes and doing some of the stuff he did last game.

“And having to take a step back with the arrival of Breece but staying ready and working on special teams. He has shown up a lot of special teams and he is more than happy to go in there and block and shift.

James Robinson, who was inactive against the Bears, could be featured more with Carter potentially out. Jets coach Robert Saleh said Robinson is still “learning” the Jets offense and was inactive last week due to wanting to get Knight more of an opportunity.

The Jets traded for Robinson shortly after Hall’s injury in late October. He was thought to be the eventual featured back, but Robinson has rushed for just 75 yards on 25 carries in the three games he has played for Gang Green.

Robinson told ESPN Wednesday that he “didn’t come here not to play.”

“It’s hard going through stuff after being traded here,” Embree said. “Just harping to him, this is by committee and it will be week-by-week in this system because you see what it is.

“We are going to rely on him throughout this season. But with our situation, it’s week-by-week. But he’s in a good spot and I can’t be mad at the kid for wanting to play. He just wants to play, there’s no harm in it and he’s a young kid that wants to help the team win.”

Cedric Ogbuehi will also be doubtful on Sunday. Following multiple injuries on the offensive line, Ogbuehi has started the last four weeks at right tackle after coming over from the Texans practice squad in September.

With the status of Ogbuehi in question, the Jets could start either Max Mitchell or George Fant at right tackle. Mitchell played last Sunday in relief of Ogbuehi for the first time since his knee injury against the Steelers on Oct. 2.

Fant would have to be activated off injured reserve as he’s been recovering from a knee injury he sustained in a matchup against the Bengals on Sept. 25.

“It’s a possibility, we’ll see,” Saleh said about Fant’s status. “We will hold on to that one until we have to. But we are going to get Ced every opportunity to get back.”

The Jets do have some good news on the injury front as defensive tackle Sheldon Rankins will play for the first time since Week 9. Against the Bills on Nov. 6, Rankins suffered an elbow injury and was projected to be out four to six weeks. But with the Jets bye week, Rankins missed just two games (against the Patriots and the Bears).

Rankins has been a leader on the Jets’ defensive line all season and has 25 tackles and two sacks in nine games.

“He’s been having such a nice year,” Saleh said. “Affective pass rusher, he has been disruptive in the run game. Veteran leadership, he knows has to play the game.

“Getting him back is always good.”