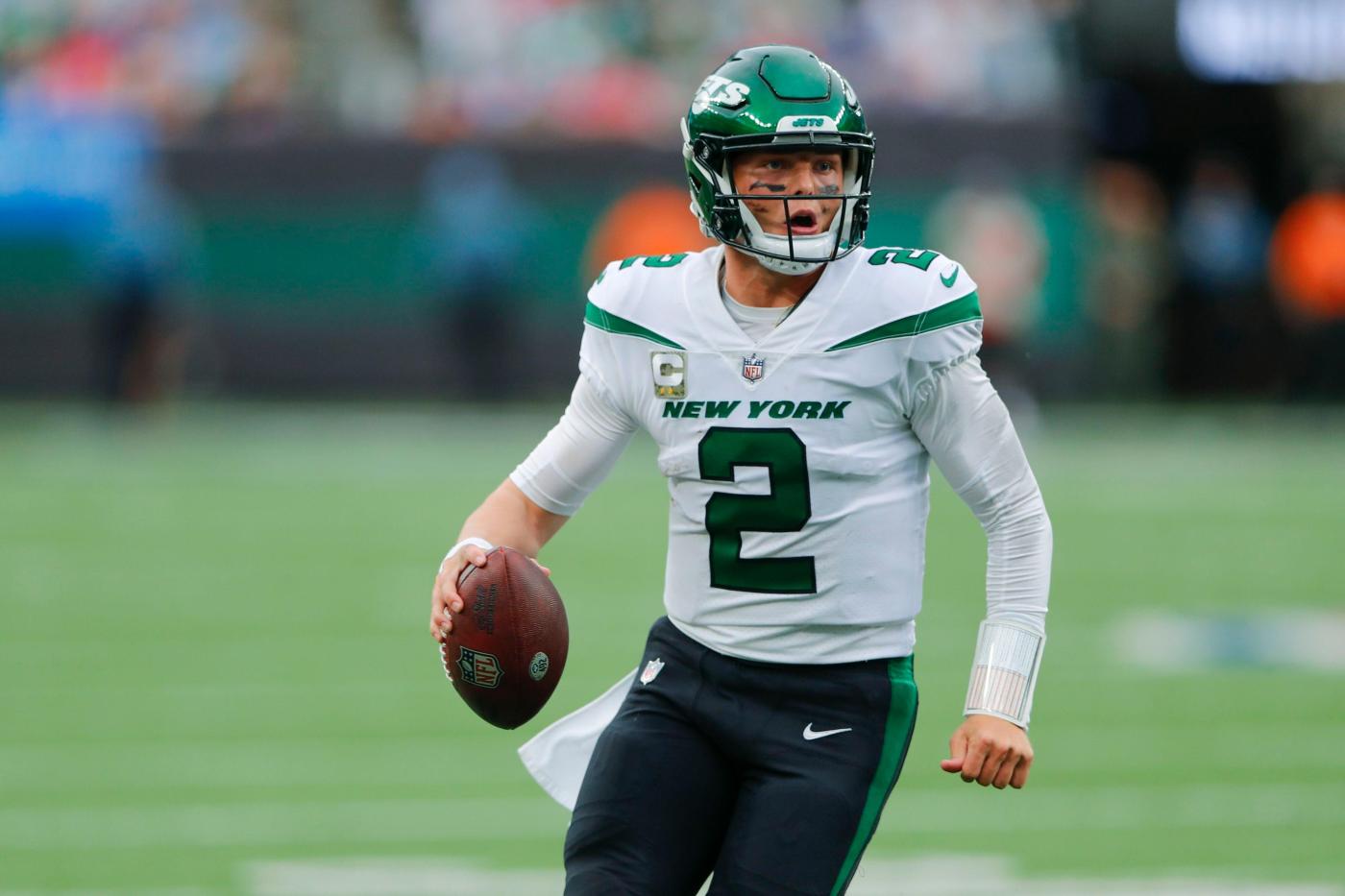 After he returned from a meniscus injury that sidelined him for seven weeks, Zach Wilson was undefeated as the Jets starting quarterback this season.

That was until Wilson ran into Bill Belichick and the Patriots defense three weeks ago.

Not only did the Jets lose to New England 22-17, but Wilson had his worst outing of the season. Now the two teams will meet again this Sunday in a pivotal AFC matchup.

“I’m excited because it’s another challenge,” Wilson said. “This is a big divisional game for us, obviously.

“Not necessarily that I feel like I have to prove anything because last game didn’t go so great and I have to do something different this time. But just the progress we won a big game last week and it’s on to the next. This is our next challenge and these guys are a great team, they do a great job defensively, so I am looking at it that way and I’m super excited for this game.”

Wilson threw for career-high 355 yards against the Patriots on Oct. 30, along with two touchdowns. However, he also threw three interceptions that translated into 10 points for the Patriots, which was the difference in a five-point game.

In his three career starts against the Patriots, Wilson has thrown for 616 yards, two touchdowns, seven interceptions and has a passer rating of 50.5. He is also completing just 53.6% of his throws during those three games.

New England has not only been a thorn in the side of Wilson but also to Gang Green during the last seven seasons. The Patriots have won 13 consecutive games against the Jets dating back to 2015.

Gang Green will face a Patriots defense that’s been one of the best in the league in recent weeks. New England is seventh in points against, second in takeaways, and third overall in Defense-adjusted Value Over (15.9%). They also have the league leader in sacks in Matthew Judon, who has registered 11.5 in nine games.

Wilson is coming off one of the better performances of his career against the Bills. In that game, he completed 18 of 25 passes for 154 yards and a touchdown.

As he did against the Bills, Wilson needs to limit his mistakes. But the rest of the Jets players will need to do the same during Sunday’s rematch.

“We have to be aggressive in all facets,” Jets offensive coordinator Mike LaFleur said. “I’m not just talking about the quarterback, that’s our left guard, right tackle, everyone has to be aggressive in their mindset and how they approach what their job is.

“[Robert] Saleh has been saying it all week — you don’t have to make a play, you have to make your play. Your play as a left guard is going to be much different than the receivers, but that’s your play to make on that particular play.

“We never want to be reckless, we never want to be careless at all for 60 minutes, for 17 games, mistakes are going to happen. But our mindset is we gotta go attack, but attack doesn’t mean we are going to throw the ball 70 times, it means attack within your fundamentals, be aggressive, be confident in what you’re doing and you do that by going out there Wednesday, Thursday, Friday attacking the game plan, going through the practices so when you’re out there on Sunday, you are able to execute to the best of your ability.”

Both the Jets and the Patriots would be in the postseason if it started today. However, with a win Sunday, Gang Green would claim first place in the AFC East after previous wins over the Dolphins and the Bills.

Coming into Week 11, the AFC East is the only division in the league featuring all four teams with records above .500 and would qualify for the playoffs. At 5-4, New England is in last place as they currently hold the final Wild Card spot in the AFC.

The Jets are 6-3 and only trail the division-leading Dolphins by half a game in the division. Not only would the Jets be on top the AFC East with a win, but that would improve to 3-1 against divisional opponents.

“Divisional games are always important because there are ramifications way down the line from a scenario standpoint, but it really is just another championship opportunity,” Saleh said.

A day after working him out, the Jets decided to add a familiar face to their practice squad.

He put his NFL career on hold during the summer after starting a medical residency program in Montreal. The Jets have had a number of injuries on their offensive line including tackles George Fant (knee) and Max Mitchell (knee). Earlier this week, the Jets activated Mitchell’s practice window as the team has 21 days to place him on the active roster, or he will revert back to injured reserve and miss the rest of the 2022 season.

It appears more likely that the Jets could be without wide receiver Corey Davis for the third consecutive game. Davis did not practice on Thursday as he is still trying to recover from the knee injury he suffered against the Broncos on Oct. 23.

Davis has missed the last two games against the Patriots and Bills. He has caught 19 receptions for 351 yards and two touchdowns in seven games.

Starting right guard Nate Herbig also missed practice again Thursday because of a shin injury. Saleh said on Wednesday that he wasn’t “really concerned” about Herbig’s injury, but it appears he might not play against the Patriots Sunday.

Defensive tackle Sheldon Rankins, who injured his elbow against the Bills on Nov. 6, also did not practice as he will not play Sunday against the Patriots.

Left tackle Duane Brown was limited once again, as he usually is on Wednesdays and Thursdays. But the veteran left tackle should be able to play this weekend.