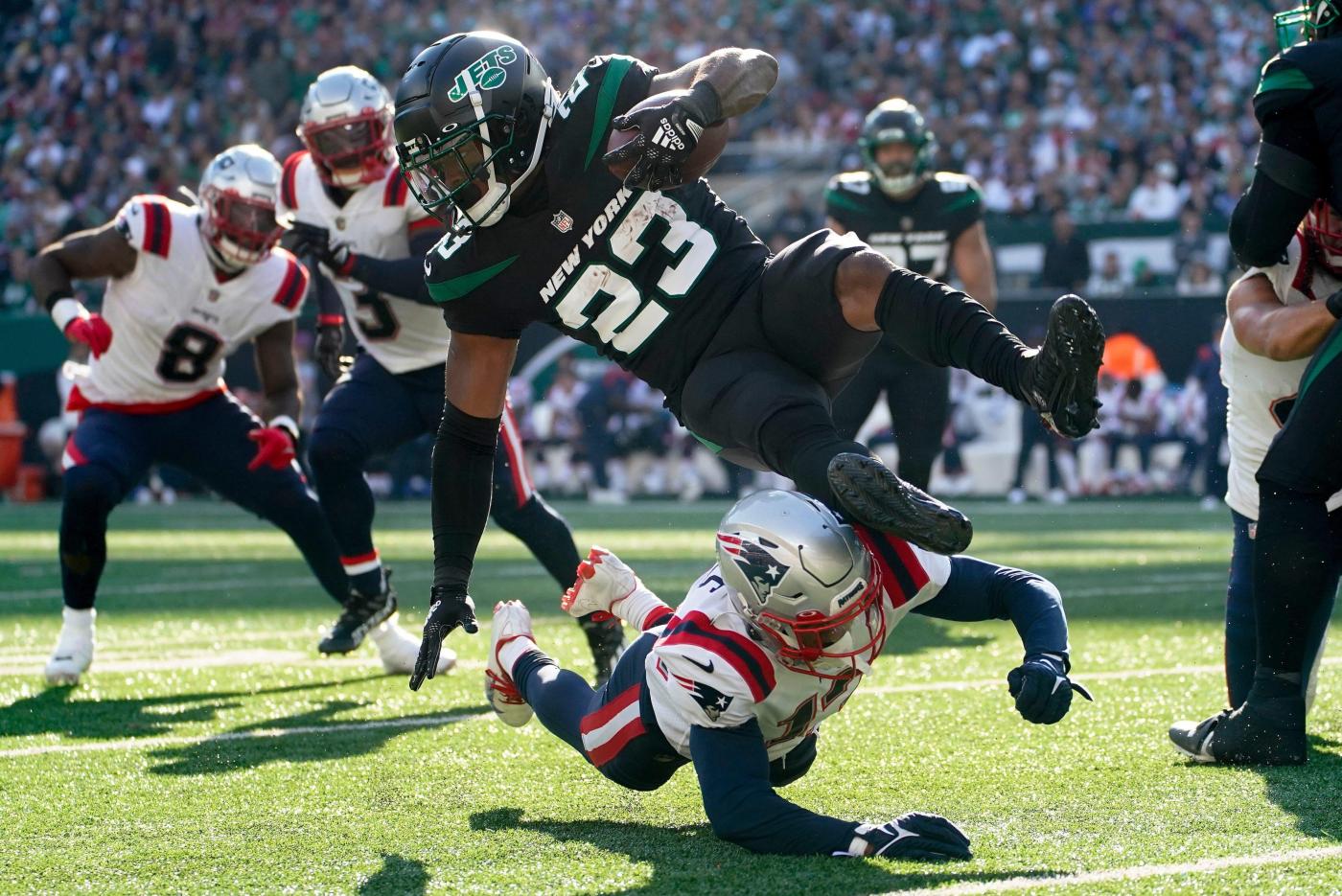 During the week of the Jets’ first game against the Patriots, the team made a significant trade that they believed would help their roster.

Gang Green acquired running back James Robinson from the Jaguars in exchange for a conditional sixth-round pick.

Robinson played sparingly during the 22-17 loss to the Patriots on Oct. 30. He’s hoping he can be more of a factor three weeks later in the rematch between the two teams.

“I feel a little bit better,” Robinson said. “Especially after the bye week. I didn’t like it at all as the trade just happened out of nowhere.

“I just had to pack up at night and leave the night morning at around six.”

The Jets traded for Robinson on Oct. 24, with the trade being officially announced the next day after rookie Breece Hall suffered a season-ending ACL injury. Because of his lack of knowledge of the offense and him joining a new team during the middle of the week the Jets didn’t feature Robinson a ton against the Patriots.

Robinson himself has just five carries for 17 yards in the game, as the Jets were cautious about featuring him a ton just days after the trade. He also had to deal with moving from Jacksonville to Northern New Jersey in a span of days. Not to mention, Robinson dealt with a knee issue that landed him on the injury report not long after he was trade

Weeks later, it appears Robinson is more comfortable with the team and the offense.

“He’s further along,” Jets coach Robert Saleh said. “I thought he had a really good day against Buffalo.

“He probably got his life settled over the bye week as it is a whirlwind to get traded because he had to get stuff moved over here. Mentally, I’m sure he is probably more calm and physically, he’s getting better.”

Robinson’s performance in the 20-17 victory against the Bills on Nov. 6 was a confidence booster for both him and the Jets. He rushed for 48 yards on 13 carries. He also caught two passes, including a seven-yard touchdown reception from quarterback Zach Wilson.

Against the Bills, the Jets rushed for season-high 174 yards and averaged 5.1 yards per carry.

The Patriots are 19th in the NFL in rushing defense, as they’re allowing 120.7 yards per game on the ground. Robinson has had a lot of success in the league during his three seasons.

As a rookie, Robinson rushed for 1,070 yards and seven touchdowns with the Jaguars. He also caught 49 passes for 344 yards and three touchdowns.

Because of that, Robinson and second-year running back Michael Carter could both play significant roles in Sunday’s game in Foxborough.

“Anytime you get traded to a completely different team and expect to play that same week, it’s going to be a steep learning curve,” Carter said about Robinson. “He is super smart, he has pretty much picked up everything.

“He is talented or else he wouldn’t be in the league. He ran for a 1,000 his rookie year, you don’t do that s—t by accident. He’s a good player as he is coming into his own as a Jet.”

Gang Green could have a doctor added to its roster very soon.

On Wednesday, the Jets worked out offensive lineman Laurent Duvernay-Tardif as he could be signed to the practice squad. NFL Network’s Ian Rapoport was the first to report the news of Divernay-Tardif working out with the team.

“LDT [Duvernay-Tardif] was such a great asset for us last year,” Saleh said. “He did such a great job and I know he wanted an opportunity to come out and work out, but we will see how that goes and make a decision from there.”

Duvernay-Tardif started seven games for the Jets last season at guard after he was traded from the Chiefs. He paused his career during the summer after starting a medical residency program in Montreal. Now that it is over, Duvernay-Tardif is ready to restart his NFL career.

In 2019, Duvernay-Tardif helped the Chiefs win Super Bowl LIV. But when the COVID-19 pandemic began in 2020, Duvernay-Tardif, who is from Mont-Saint-Hilaire, Quebec, and grew up in Montreal, returned home to work in a healthcare facility.

The Jets could use Duvernay-Tardif, even if it’s just on the team’s practice squad. Tackle George Fant has been out since late September due to a knee injury and guard Alijah Vera-Tucker is out for the season after tearing his triceps last month.

Davis has been out since injuring his knee against the Broncos on Oct. 23. He missed the Jets last two games before their bye against the Patriots and the Bills.

Rankins will not practice or play against the Patriots Sunday after he injured his elbow against the Bills on Nov. 6. ESPN reported that Rankins could be out for four to six weeks. However, Saleh said he is “pretty confident” Rankins will not have to be placed on injured reserve, which would mean he would miss four weeks of game action.