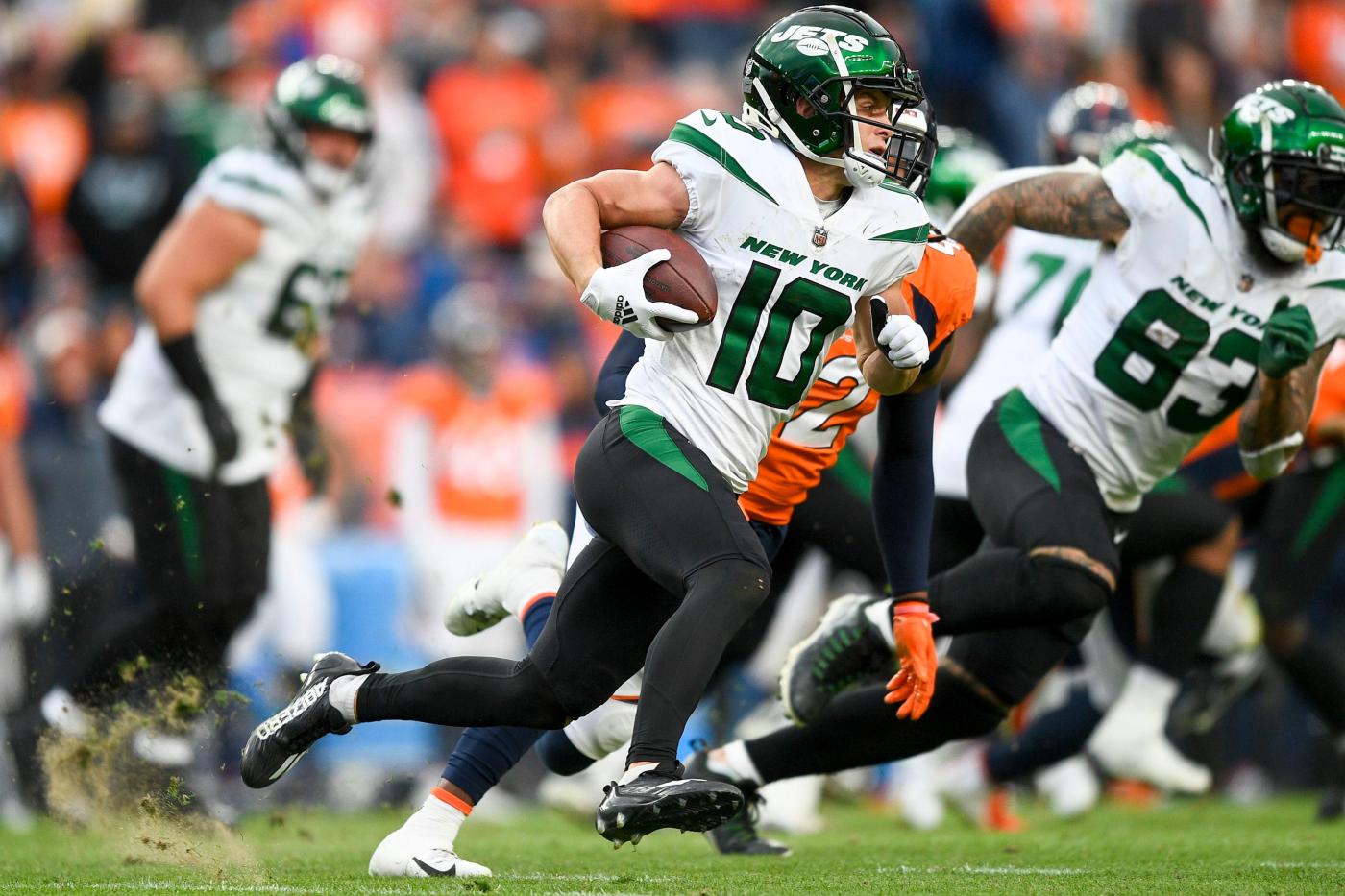 Before the regular season began, wide receiver Braxton Berrios said on the Rich Eisen Show that if the Jets didn’t make the playoffs, he would consider it “a failed season.”

What are Berrios’ thoughts now, halfway through the year?

“I got crazy looks when I said at the beginning of the year that we play this game for the playoffs, period,” Berrios said on Monday. “That sentiment hasn’t changed. It was from Day 1 with this new staff coming in.

“We got a long way to go. We obviously set ourselves up in a great spot through these first nine games.

“We have this back half and we all know December football and January football, that’s what really matters. We feel great about it, but it’s one week at a time and we have to focus on this opponent right ahead.”

While many joked about Berrios’ thoughts back in July, no one is laughing anymore. With eight games remaining in the season, the Jets are 6-3 and are a half-game out of first place in the AFC East after the Bills lost to the Vikings on Sunday and the division-leading Dolphins having a bye week coming up.

With a win Sunday against the Patriots, Gang Green would have sole possession of first place in the division. The Jets haven’t won an AFC East divisional crown since 2002 and have just four in franchise history (est. 1960). Gang Green currently has the longest playoff drought in the NFL, as it hasn’t played in the postseason since 2010.

Coming into Sunday’s game against the Patriots, the Jets sit fifth in the AFC, with the Bills at No. 6 and the Patriots at No. 7. Right now, all four teams in the AFC East currently have a winning record.

“That’s a special feeling,” Jets center Connor McGovern said about the team potentially being in first place after Sunday’s upcoming game against the Patriots. “I haven’t had the opportunity in my career to ever be in that position to be first in the division.

“It’s an important game as they’re obviously all important. Division games are worth two essentially and this one is extremely big to be able to take the lead.”

Following a 1-2 record to start the season, the Jets have won five of their last six games since the return of Zach Wilson after injuring his meniscus during the preseason. Although Wilson’s stats (1,202 yards, four touchdowns and five interceptions) don’t exactly stand out, the Jets defense and special teams have played a significant role in the team’s recent success.

The one game the Jets couldn’t win since Wilson’s return was the 22-17 Oct. 30 home loss against the Patriots. In that game, Wilson completed 20 of 41 passes for 355 yards and two touchdowns, but he also had three interceptions, which translated into 10 New England points.

The Jets led the game 10-6 at halftime, but they were outscored 16-7 in the second half. Gang Green also only rushed for 51 yards, which is less than half of what the team currently averages [116.0].

New England has defeated New York 13 consecutive times dating back to 2015. After the game, Jets players felt like they let the game against the Patriots slip away and said they were looking forward to the rematch. Three weeks later, Gang Green relishes the challenge of ending its dreaded losing streak to the Patriots.

“They’re a great team,” Berrios said about the Patriots. “One of the first things you learn in the NFL is before you win, you have to keep from losing.

“That was a game where they took advantage of every opportunity that we gave to them. They’re a well-coached team and they’re going to win those games when we make those mistakes. It comes back to us and executing our stuff and then maybe it’s a different game.

“You look at our division, Miami, us, Buffalo and New England, all winning records, all really, really good teams. Obviously, division games account for a little bit more than out-of-division games. You gotta take care of your division first and we have them and we gotta go to Foxborough and we gotta try and put something together.”