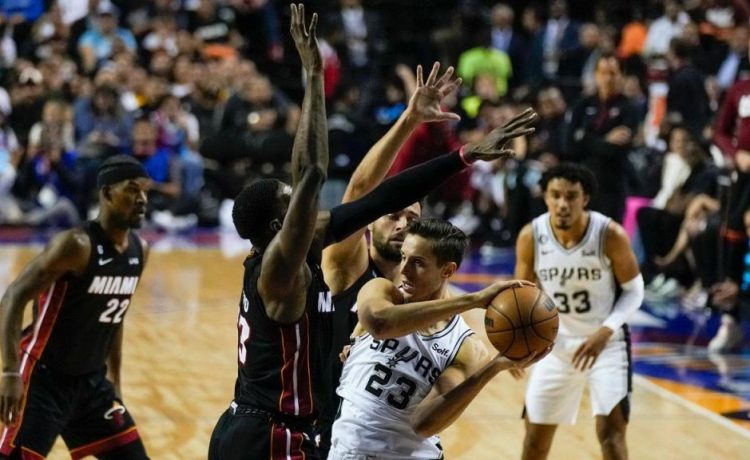 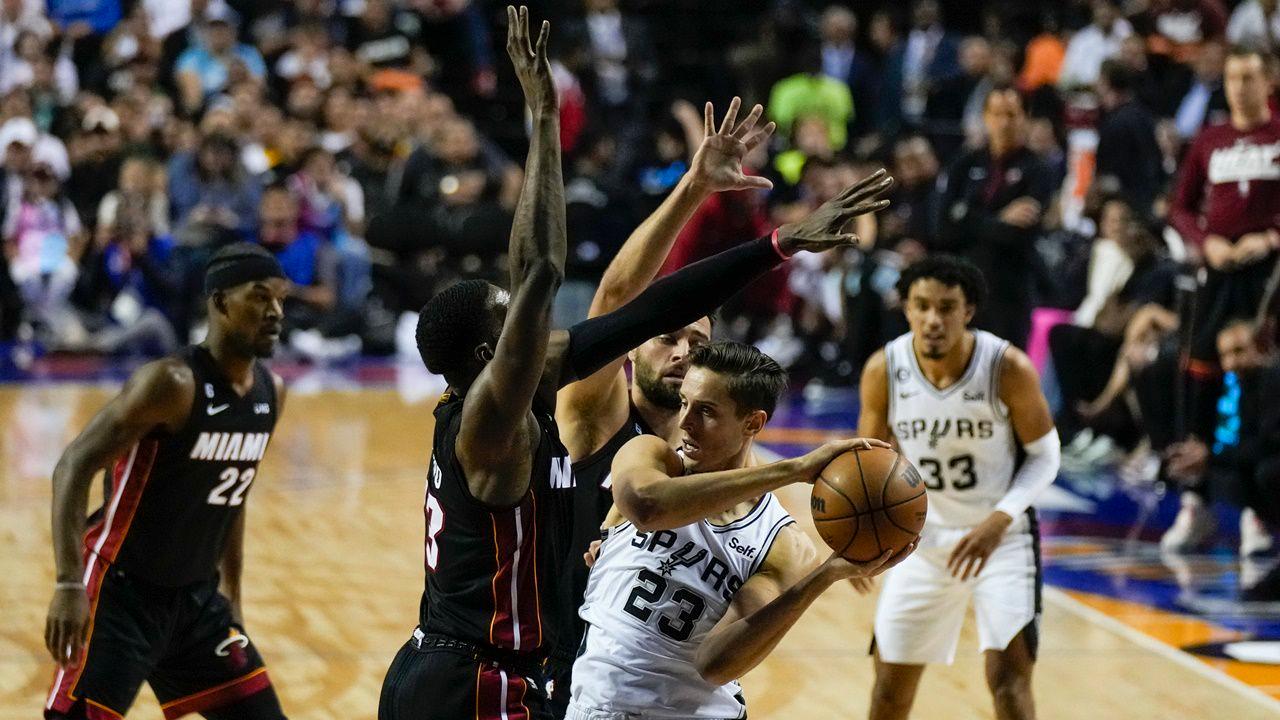 Observations and other notes of interest from Saturday night’s 111-101 victory over the San Antonio Spurs:

– This was a reminder of the core.

– The core that endures.

– Yes, Tyler Herro has had his moments the past week.

– Yes, Kyle Lowry has had his surges.

– But Jimmy Butler and Bam Adebayo got the Heat to the 2020 NBA Finals.

– So back in the spotlight, this time on the international stage, the two again operated from a position of leadership,

– With Lowry again out, more was needed.

– With Herro back to somewhat of a more typical orbit, it meant more something from someone else.

– So another double-double from Adebayo.

– And Butler as the steadying force.

– And a Christmas homestand to follow with greater cheer than recent homestands.

– With Caleb Martin missing his first game of the season due to injury (his lone previous absence was his Oct. 24 one-game suspension for a fracas the previous game), Nikola Jovic got the boost into the starting lineup.

– Jovic had been dealing with back spasms early in the week while in the G League.

– And with Lowry out for a second consecutive game, listed with knee soreness, Herro again shifted to point guard.

– The Heat’s other three starters were Adebayo, Butler and Max Strus.

– In addition to Martin and Lowry, also out for the Heat were Gabe Vincent (knee), Jamal Cain (G League) and Omer Yurtseven (ankle).

– With Dewayne Dedmon and Duncan Robinson then following together.

– The only other available Heat player at that stage was center Orlando Robinson.

– Dedmon then was lost for the game in the second period with an ankle sprain, with Orlando Robinson taking Dedmon’s minutes.

– Adebayo made it 28 consecutive games scoring in double figures, the third longest such streak of his career. His longest streak was 55 games in 2021.

– Heat coach Erik Spoelstra again spoke ahead of the game of his respect for Spurs coach Gregg Popovich. Spoelstra two years ago worked under Popovich for USA Basketball.

– “I admire him a great deal,” Spoelstra said. “And it’s more than just the basketball part. The basketball part goes without saying. He’s the best, or arguably the best that’s ever done it. But it’s the human side. I’ve said it many times before, he just has a great way with people and he has a way of making you feel like you matter. That’s everybody in the room.”

– Spoelstra added, “I felt honored that I had the opportunity to spend time with the USA Basketball program. And that’s how I got to know him even more on a personal basis, and my respect for him and admiration just ten times where it was before, where it was pretty high before.”

– In the wake of their 15-111 victory in Miami last Saturday, the Spurs were seeking their first sweep of the annual two-game season series since 2017-18.

– Ahead of the game, Spurs forward Keldon Johnson spoke of the recent success of his former Kentucky teammate Herro.

– “I’m glad to see Tyler being successful,” Johnson said. “He’s doing what he’s been doing since Kentucky and high school. My hat is off to him.”

– “He’s been hot,” Vassell told San Antonio’s Express News. “We’ll just try to make him a driver. We all have got to be attentive to him. We got to respect it, so just lock in on defense.”

– Spoelstra nor Popovich played up the game being played 7,200 feet above sea level.

– “I thought it would be best if I don’t say a word, and hopefully they don’t figure it out,” Popovich quipped. “I don’t want to scare anybody.”

– Said Spoelstra, “It’s an even playing field, so there shouldn’t be any excuses.”

– In addition to the game actually being on the road, it formally counted as a road game, with the Spurs giving up two home games apiece to play in Mexico City and Austin twice this season, in an effort to expand the reach of their brand.

– The game was the third of nine for the Heat the season with local tip-off before 6 p.m. Five of those are on the road, four at home.

– Oladipo addressed the crowd before the game on behalf of the Heat.