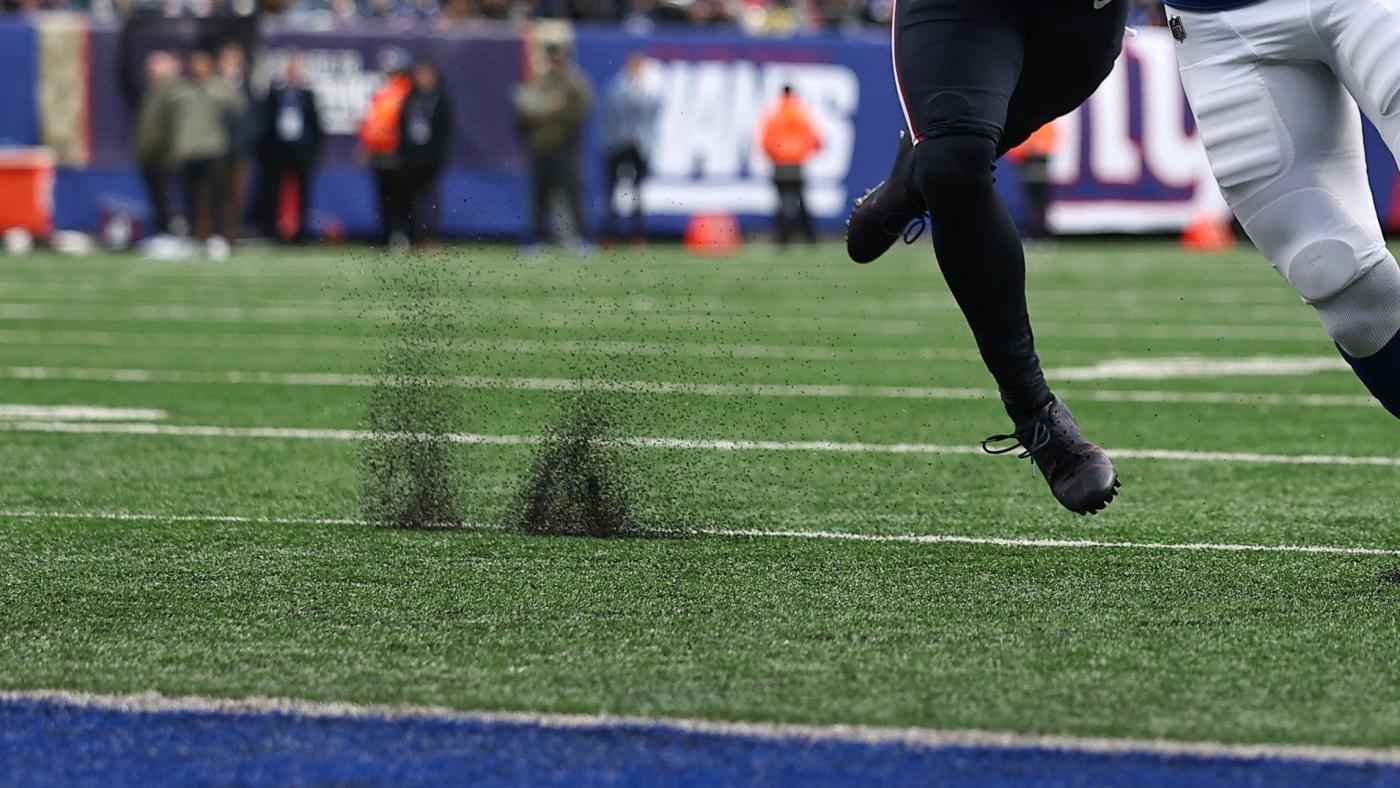 Giants players ideally would like grass at MetLife Stadium, not the “new synthetic surface” that stadium officials recently promised to install in 2023.

Some players also believe they should be consulted about the planned turf turnover that impacts them more than anyone.

“One hundred percent,” said wide receiver Sterling Shepard, who tore his left ACL this season on a non-contact play on the turf. “I mean, we’re the ones that are playing on it. So it definitely should be something they approach us about and see our thoughts.”

Good news: Giants co-owner John Mara told the Daily News this week through a team spokesman that he expects to consult his players during the process.

“The next field in the stadium is the subject of ongoing discussion between the Jets, the stadium and us,” the spokesman relayed on Mara’s behalf. “John has heard from the players and other experts about playing surfaces as part of his roles on the player safety and health committee, competition committee and management council.

“He expects to have conversations with our players as we move along in the process of selecting a new field,” the statement added.

Mara’s plan to solicit players’ insight is noteworthy because that is not required protocol for this type of decision.

An NFL players’ association committee is always involved in these conversations. And teams’ union reps are kept in the loop (the Giants’ is safety Julian Love).

But individual players traditionally are not primary voices in these discussions, and they certainly don’t have approval power or sign-off to block a decision.

A lot of parties will be involved in this upcoming MetLife Stadium surface change. Stadium officials, the Giants and the Jets stay involved jointly.

Still, players’ complaints around the league about turf – and the MetLife Stadium turf in particular – have reached a deafening crescendo.

So it would be foolish to push ahead without player input.

Who knows: the turf might even deter Odell Beckham Jr. from coming back to New Jersey, given that he’s torn his left ACL twice already.

“You want that grass,” Giants receiver Kenny Golladay told The News. “It’s better. It doesn’t matter that [someone says] this turf is better [than another]. Grass is way more forgiving. With turf, you get stuck a bit in it. And if you think about it, on turf, whatever force you’re putting into the ground is shooting right back up into you.”

As the Giants organization researches what to do about the playing surface, though, they also are contending with an even larger issue:

They are annually one of the most injured teams in the NFL. This year is no different. And it’s not just the turf.

The Giants have been in the NFL’s bottom third teams for most injuries in four of the last six years. That spans three different head coaches: Pat Shurmur, Joe Judge and now Brian Daboll.

Through Week 11, Daboll’s team was the NFL’s fifth most injured team in 2022, according to ManGamesLost.com, with 153 games missed due to injured players and health protocols (The Saints lead the league with 173).

Mara acknowledged to the Daily News that this is an “issue” and said the organization is working on finding a solution.

“It is an issue we continue to discuss and review with the GM, head coach and medical, which includes athletic training, strength and conditioning, and sports science,” Mara said through a team spokesman.

What is the root cause, though?

The installation of MetLife Stadium’s current turf was only completed on June 8, 2020. So the playing surface hasn’t even been a constant as the Giants have built a reputation as one of the NFL’s most injured teams.

And the Jets, who share the same home stadium, were the NFL’s fourth-healthiest team through 11 weeks (only 77 games missed, per ManGamesLost.com).

Now, after GM Joe Schoen and Daboll reduced and altered the Giants’ practice and training workload, this year’s team has been devastated by major injuries pretty much across the board – including four torn ACLs in their 11-player rookie draft class alone.

Head athletic trainer Ronnie Barnes and the training staff seemingly have been the primary constant during this last decade, which included improved rankings of eighth in 2016 and 16th in 2019. But any short-term gains have been fleeting.

Schoen promised in September that the Giants will “continue to evaluate” their training program and said “if there’s something we can do better, we’ll find a way to do it better.”

As those evaluations continue, players’ focus remains on the MetLife Stadium turf as one element that needs to change immediately.

“We shouldn’t be taking more damage from the field,” Love tweeted in support of the NFLPA’s recent social media campaign against turf.

NOT JUST THE PLAYERS

Shepard said something surprising: Some of the Giants’ coaches feel turf’s impact on their knees while just standing on the sidelines of games.

Center Jon Feliciano said, “Arizona has the best field in the league by far,” referring to the Cardinals’ well-manicured surface that is rolled out into the desert sun and kept pristine.

He said “when you fall on [turf[, you can feel the difference.” And he shook his head thinking about last year’s Bills home playoff game on the frigid Buffalo turf against the New England Patriots.

“Falling on that field felt like concrete,” Feliciano said. “Whatever the hardest possible surface is, that’s what it felt like.”

Oddly enough, though, Feliciano said the other most painful field to fall on in cold weather is Kansas City’s. And the Chiefs play on grass. Washington’s FedEx Field also is widely considered one of the worst playing surfaces in the league.

NFLPA president JC Tretter took issue specifically in a recent missive with “slit film” turf that he said “has statistically higher in-game injury rates.” MetStadium is one of the six stadiums that uses it, along with the homes of the Detroit Lions, Minnesota Vikings, New Orleans Saints, Indianapolis Colts, and Cincinnati Bengals.

Tretter said “the NFL and its experts have agreed with this data and acknowledge that the slit film field is less safe.” And he challenged the league over several player health issues, including turf, to “stop with the lip service, stop with the media spin, stop pretending you care.”

But Jeff Miller, the NFL’s executive VP of communications, public affairs and policy, told ProFootballTalk in a statement that the ‘slit-film’ conversation is more complex.

“While slit-film surfaces, one type of synthetic material, have 2-3 more injuries per year, most of them are ankle sprains — a low-burden injury — whereas slit film also sees a lower rate of fewer high-burden ACL injuries compared to other synthetic fields,” Miller said. “As a result, the league and NFLPA’s joint experts did not recommend any changes to surfaces at (our joint meeting on field surface safety) but agreed more study is needed.”

MetLife Stadium officials told ESPN recently that they “historically have replaced our playing surface every 3-4 years.” They said “we have made the decision to replace the field in 2023 and are currently reviewing proposals from multiple vendors for a new synthetic surface.”

And one league source said on the bright side, whether they install a new turf or grass, “addressing it shows they see it’s a problem.”

Shepard said MetLife Stadium’s decision to make a change was not due to any players storming upstairs into Mara’s or Schoen’s office. That didn’t happen.

It was more about the groundswell of public frustration from players all over, beginning with the San Francisco 49ers’ anger with the MetLife turf while losing players in back-to-back games there against the Jets and Giants.

“I just think it’s the uproar of everybody around the league,” Shepard said. “And then you see how many injuries have happened on our field particularly and around the league, it’s hard to ignore that. But I’m glad we’re taking a step in the right direction doing something a little better for the players.”

Who knows if Mara, stadium officials, the Giants and Jets will get the players their grass. But listening to them is a good start.