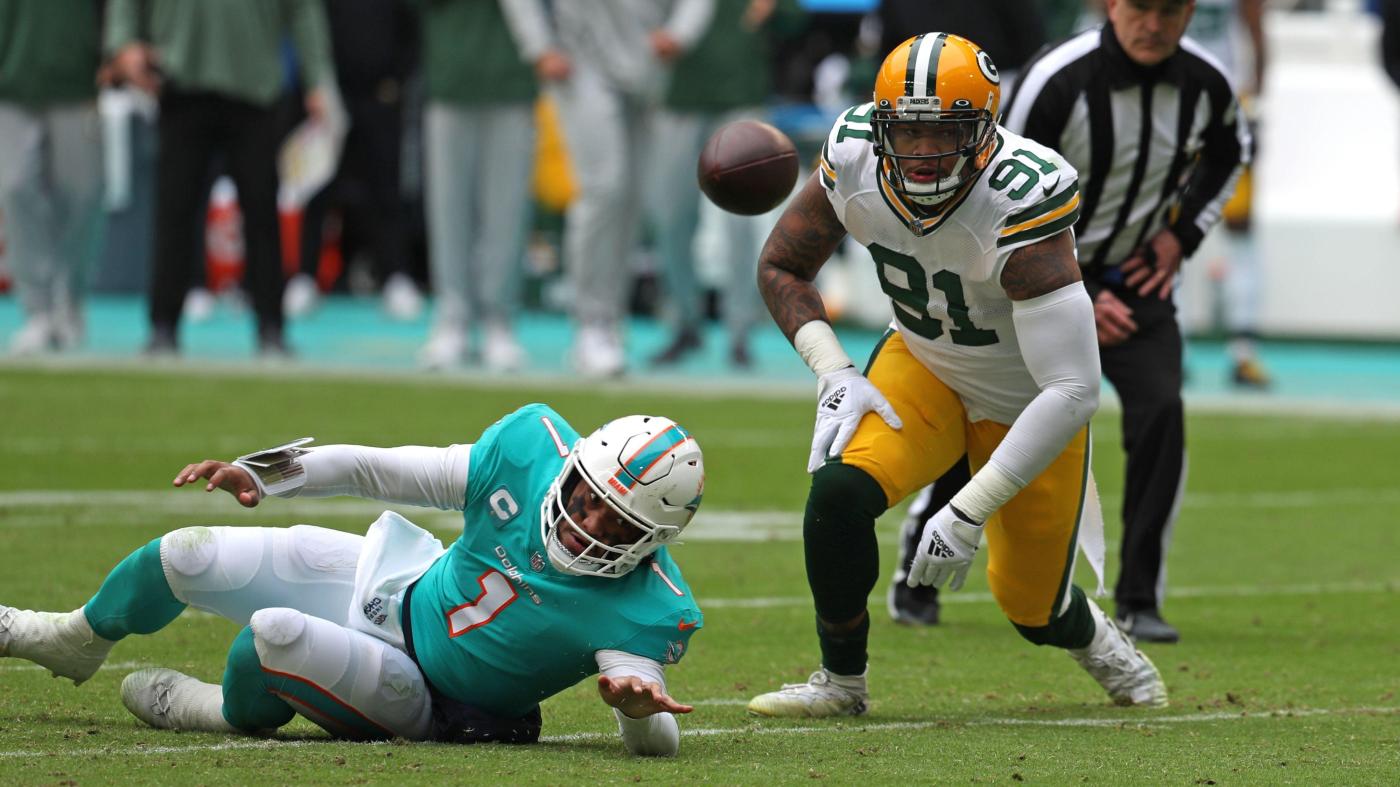 Dolphins quarterback Tua Tagovailoa, who will miss Sunday’s game at New England, didn’t exhibit symptoms of a concussion during last week’s game against Green Bay, according to a joint review by the NFL and NFL Players Association a statement released by the two organizations said Saturday.

“The NFL and NFLPA concluded their joint review of the application of concussion protocol involving Miami Dolphins’ quarterback Tua Tagovailoa in Sunday’s game against the Green Bay Packers,” the statement said.

“The joint review determined the protocol was not triggered. The protocol is initiated when a player receives an impact to the head and exhibits or reports signs or symptoms suggestive of a concussion. The review established that symptoms of a concussion were neither exhibited nor reported until the following day at which time the team medical personnel appropriately evaluated and placed Mr. Tagovailoa in the concussion protocol.”

The play during which Tagovailoa sustained the head injury hasn’t been determined but video of a second quarter tackle began circulating online after the Packers game. Tagovailoa’s head hits the ground violently during the tackle.

Dolphins coach Mike McDaniel said the concussion was diagnosed after coaches watched film Monday morning, thought things were suspicious and then questioned Tagovailoa, leading them to suggest Tagovailoa see a doctor, who later diagnosed the concussion.

Tagovailoa sustained his second concussion of the season against Green Bay. His first concussion came in the Cincinnati game on Sept. 29. He was tackled by Cincinnati’s Josh Tupou and taken off the field on a stretcher and was briefly hospitalized but flew home with the team.

Tagovailoa missed the next two games and returned for the Oct. 23 game against Pittsburgh.

Cincinnati was Tagovailoa’s second head trauma incident. He was tackled against Buffalo by Bills linebacker Matt Milano and his head hit the ground violently. He stumbled after getting back to his feet and left the field and went into the locker room shortly before halftime but returned in the third quarter without missing a play.

The NFL and NFLPA changed their concussion protocol after that incident and said any player displaying concussion symptoms must sit out the rest of the game.

Dolphins quarterback Teddy Bridgewater got swept up in that net when he was forced to leave the New York Jets game after one play when a NFL-employed spotter in an upstairs booth said that Bridgewater stumbled when getting up after a hit by Jets cornerback Sauce Gardner on the Dolphins’ first offensive play of the game. Rookie quarterback Skylar Thompson finished that game.

Bridgewater is scheduled to start at New England on Sunday with Thompson as the backup. Presumably, wide receiver Cedrick Wilson Jr. is the third quarterback.

The Dolphins signed offensive tackle Kendall Lamm from the practice squad to the active roster while placing defensive tackle Justin Zimmer on injured reserve, the team announced Saturday, before its game at the Patriots (7-8).

Additionally, the Dolphins (8-7) elevated defensive tackle Josiah Bronson and outside linebacker Brennan Scarlett from the practice squad for Sunday’s game.

Lamm, who signed to Miami’s practice squad on Nov. 28 and has been elevated two previous times, gives the Dolphins a veteran reserve tackle as the team deals with various injuries at the position.

Eric Fisher is doubtful for Sunday’s game with a calf injury. Starting left tackle Terron Armstead is questionable as he nurses toe, pectoral, knee and hip ailments. Greg Little popped up on the team’s Friday injury report as questionable due to a foot injury, and Austin Jackson landed on injured reserve after each of his two starts this season because of his ailing foot.

Lamm has played in 86 games with 28 career starts over seven seasons between the Houston Texans, Tennessee Titans and Cleveland Browns. He also spent this year’s training camp with the Detroit Lions.

Zimmer was not listed on this week’s injury report, but he was last noted as receiving treatment for a back injury before Miami’s Dec. 17 game against the Bills. Now on IR, the earliest he could return is if the Dolphins qualify for the AFC Championship Game.

With Zimmer now sidelined, it opens an opportunity for Bronson’s first game action with Miami this season in Foxborough. Bronson, who went undrafted in 2021, played in seven NFL games last year — six for the New Orleans Saints and one for Cleveland.

Scarlett, a member of the Dolphins’ active roster last year, could make his 2022 debut on the first day of 2023 with fellow outside linebacker Bradley Chubb questionable due to hand and ankle injuries.