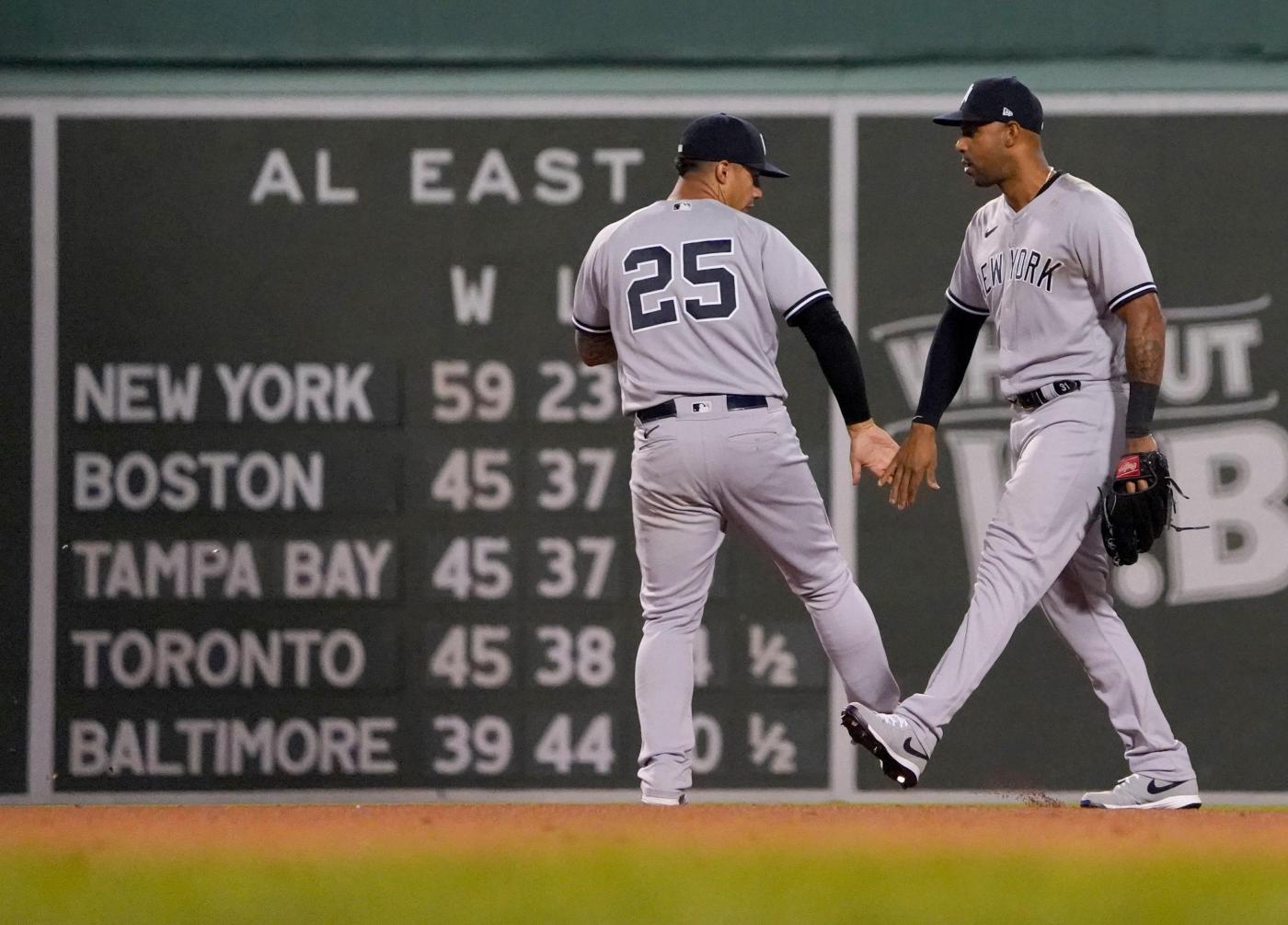 BOSTON — Gerrit Cole turned to see the ball sailing high into the night. The Yankees ace closed his eyes, he knew it was out. His shoulders and head dropped. Cole opened his eyes and threw up his hands. The right-hander did not know what else he could do to try and contain Red Sox slugger Rafael Devers.

Cole couldn’t beat the Red Sox, but the Yankees’ bats, even without Aaron Judge and Anthony Rizzo, did Thursday night. Josh Donaldson hit a grand slam and Aaron Hicks homered as the Bombers edged out the Red Sox 6-5 at Fenway Park.

The Yankees have won two straight after losing two in a row. They improved their best-in-baseball record to 60-23 and grew their lead over Boston in the American League East to 15 games.

Donaldson hit a grand slam, his second four-bagger in as many games, and went back-to-back for the second straight day, this time pairing with Aaron Hicks as they both homered in the third inning. Hicks tripled in the fifth and scored on a Jose Trevino “double,” on a pop up that first baseman Franchy Cordero simply missed.

Clay Holmes closed out the ninth for his 16th save.

Cole allowed five runs on five hits, well he allowed them on two big swings from Rafael Devers. He walked three and struck out seven.

The $324 million man had his hands full with Devers Thursday night. The young lefty slugger came into the game with four homers in 27 at-bats against the Yankees’ ace — and only improved on that. Cole walked him in the first inning and then Devers took him deep in the third, a two-run shot to right field. In the fifth, with two on, Devers hammered a second to dead center field, a 434-foot monster that had Cole flustered.

Wandy Peralta finally got Devers out in the eighth, coaxing a ground ball to third from the Red Sox third baseman.

The Red Sox left a mark on Cole last season. He allowed 15 earned runs over 24 innings pitched against the Red Sox for an ugly bruise of a 5.63 ERA. The lasting image of Cole’s 2021 season would be him leaving the mound at Fenway, head down the Red Sox fans taunting him after giving up two home runs and leaving two runners on after just recording six outs in the Wild Card Game loss.

“I mean it stays with you like all losses that end your season do,” Cole said of that loss that ended the Yankees’ 2021 season. “Yeah, I mean it’s weird that we haven’t been back. We played them early, so I feel like it’s just another series there. I am gonna be here for a long time. So we play a lot of series in Boston. So looking forward to getting back there and, and and going after the ball and starting off the series right. And putting that Wild Card (game) behind us.”

It’s been a House of Horrors for him.

“First of all, it’s a really good team over there. And a really good offense and a lot of really good hitters that have done a good job in certain games against him about coming up with a plan and taking away certain things from him, selling out for certain things and they’ve done a good job of that in some outings here,” Yankees manager Aaron Boone said of Cole’s struggles here. “So it’s on us, it’s on them, it’s on (Gerrit). You’re always kind of making those adjustments that good teams and good players are able to do and hopefully, we can do that.”

This time, however, Cole came in with the hottest offense in baseball, coming off a 16-0 rout of the Pirates Thursday night.

With Judge sitting out with a tight calf issue and Rizzo missing his third straight game with back spasms, Donaldson and Hicks had to carry the Yankees. They had also had big contributions on Wednesday night with both having a grand slam. It was the second straight game the Yankees had back-to-back homers with Donaldson and Gallo going back-to-back against the Pirates.