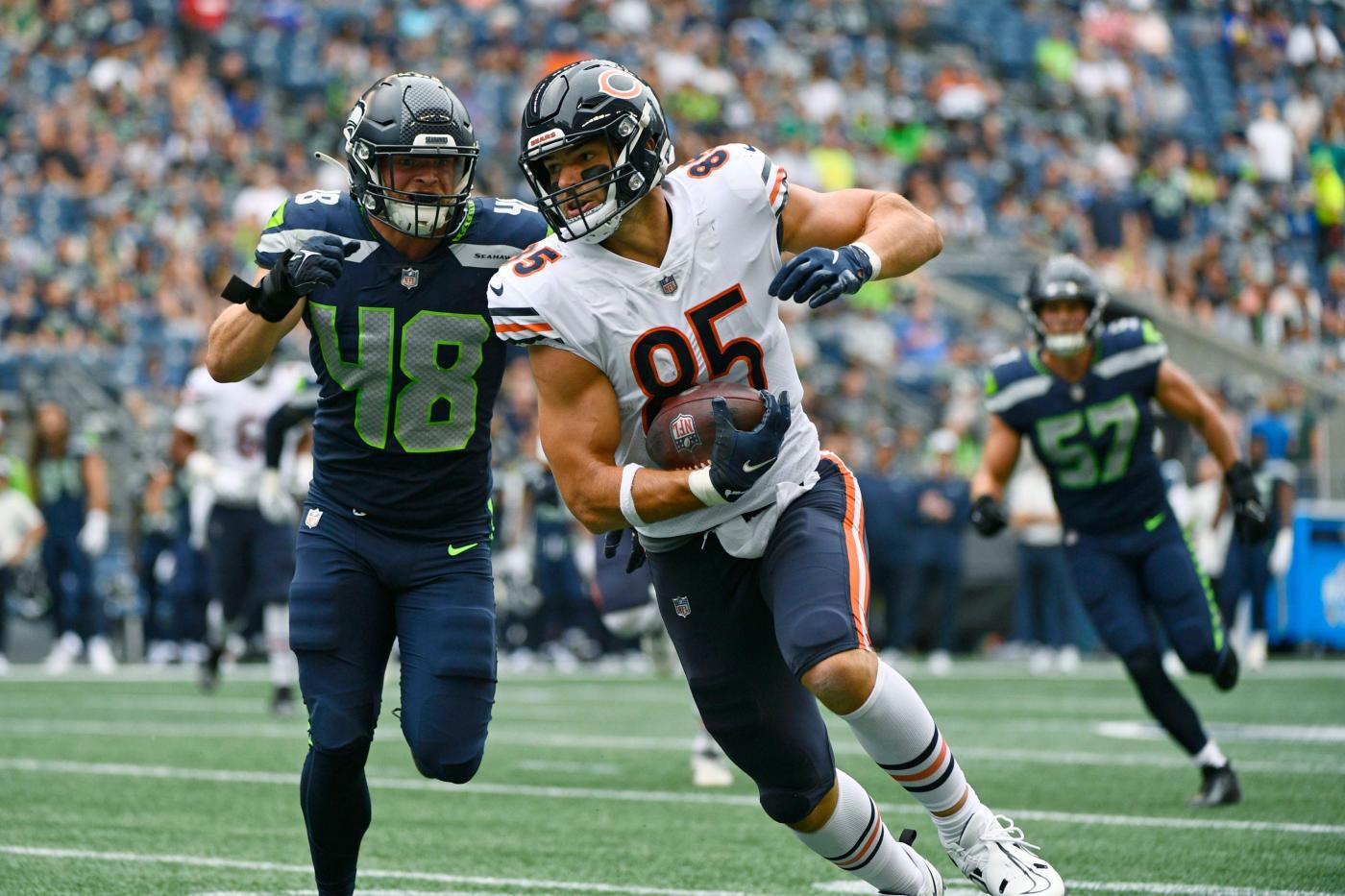 Two thousand miles was a long way to travel for one series of football that lasted 10 plays and less than six minutes. But Chicago Bears quarterback Justin Fields at least had a few positives to review during the trip back from Seattle on Thursday night.

Bears coach Matt Eberflus limited many of his offensive starters to just the first drive of the Bears’ 27-11 preseason victory over the Seahawks at Lumen Field. He didn’t want to put too much on them given they played their preseason opener against the Kansas City Chiefs just six days earlier.

But that caution meant a limited sample size for Fields, whose every step is being scrutinized for signs of progress in his second season.

So here’s what Fields can take away from his drive — a better start, points on the board, a connection with tight end Cole Kmet and more work under new offensive coordinator Luke Getsy.

Fields completed 5 of 7 passes for 39 yards, helping set up a 35-yard Cairo Santos field goal, the first preseason points by the first-team offense after three scoreless series in the opener.

“The operation was good. His preparation was great,” Eberflus said of Fields. “He handled the offense the way we wanted him to, had a nice drive and scored the field goal. It’s progress. And guys see more progress in practice sometimes, where his footwork is getting better, his delivery when he feels pressure, how he slides in the pocket and delivers the ball. So he’s improving every single day.”

The highlight came when Fields faked a handoff to Khalil Herbert, rolled to his left and found his second read, Kmet, wide open. Fields delivered a strike, and Kmet powered forward 8 extra yards for a 19-yard gain. Kmet similarly rumbled to a 12-yard gain on a short pass on the Bears’ first play from scrimmage.

“Cole’s a great tight end. He can do pretty much all,” Fields said. “He can block. He’s a great route runner. He has great hands, so he definitely brings another weapon to our offense.”

Fields still hasn’t played with his full array of playmakers. Running back David Montgomery and wide receivers Byron Pringle, N’Keal Harry and Tajae Sharpe were among the players to sit out with injuries Thursday.

Kmet didn’t play in the preseason opener because of an injury, so the connection in Seattle was notable, with Kmet leaping up and thumping his helmet in celebration after the 19-yard catch.

“It builds your confidence,” Kmet said. “All the work you put in through the offseason, the experience I’ve been having these past two years, it continues to grow each game we play. It feels good.”

It wasn’t all good. Fields was under pressure several times during the drive, and the Bears didn’t convert on two third downs.

On a chaotic third-and-3 play with Seahawks players all around him, Fields tried to scramble forward to the first-down marker, but his diving reach was well short. He said afterward he thought he was closer. But Seahawks outside linebacker Darrell Taylor committed a neutral-zone infraction on fourth-and-2, and the Bears got a first down.

On third-and-4 from the Seahawks 15, Fields dumped a short pass to Herbert, who was clobbered for a 2-yard loss, and the Bears went to Santos.

“It was zone — I should have worked through to the middle of the field,” Fields said. “So that was my fault for sure.”

Most of the rest of the night was about the backups and the rookies, including third-round wide receiver Velus Jones Jr., who made less of an impact on offense than he did with a 28-yard kickoff return and 48-yard punt return. Right guard Teven Jenkins and right tackle Larry Borom also got work beyond the first drive.

The Bears have five practices and three off days before their third and final preseason game against the Cleveland Browns on Aug. 27. Eberflus said the coaching staff still is determining whether Fields will play in that game and the pros and cons of such an appearance.

For his part, Fields thinks he could benefit.

“I feel like every time I touch the field I can get something out of it,” Fields said. “Every time I get on the field it’s an opportunity for me to get better.”