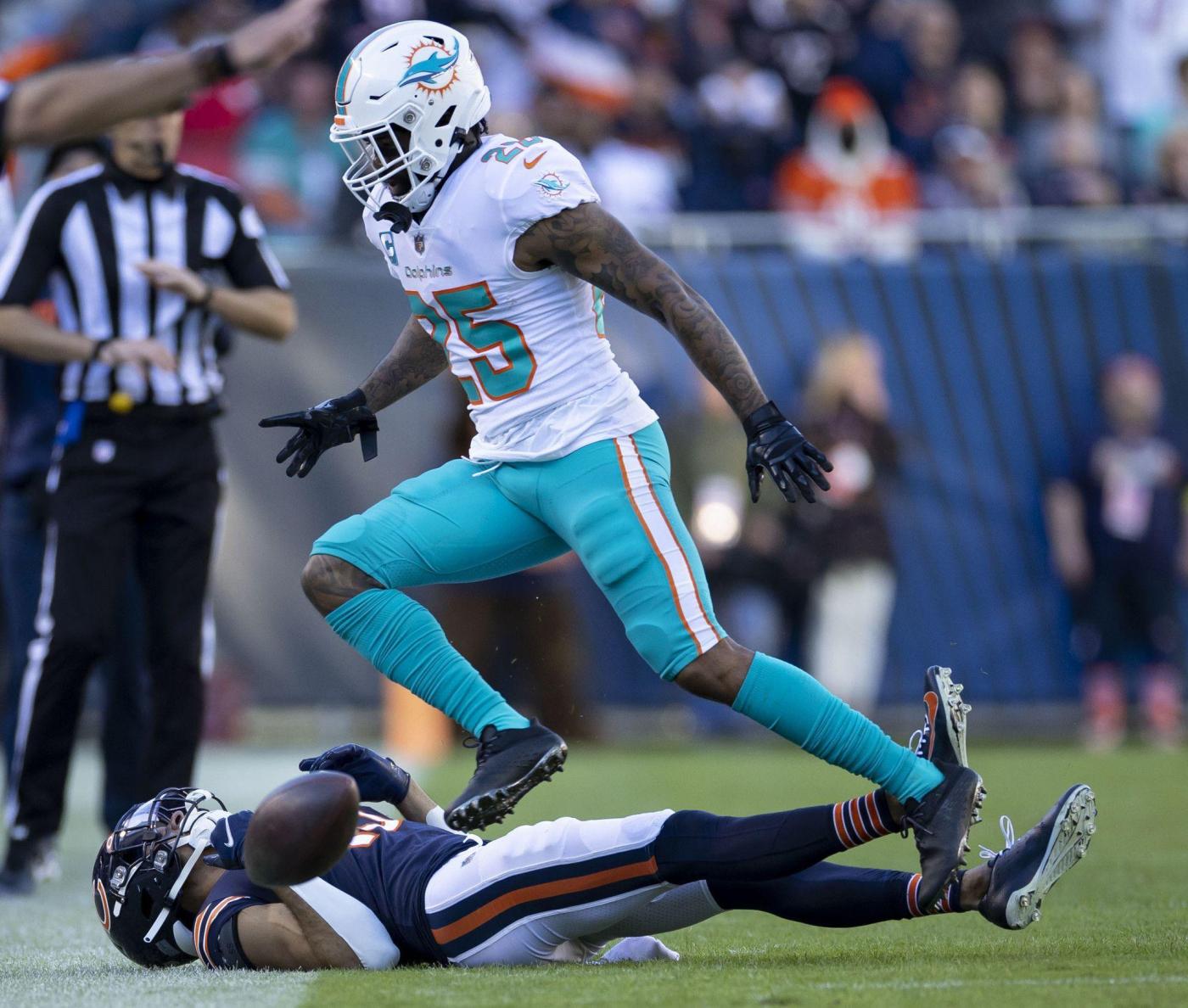 He didn’t misfire on a pass until one minute remained in the first half against the Chicago Bears, completing his first 10 throws. He led the Dolphins to touchdowns on four of their first five possessions. He passed for 302 yards and three touchdowns and sparked his team to a 35-32 victory.

Yet when Tagovailoa arrived for his postgame news conference, even he was marveling at what Justin Fields had done. The Bears quarterback had put the Dolphins defense into a Tilt-A-Whirl car for much of the afternoon, twisting, spinning, accelerating in all directions. He made Soldier Field his personal carnival grounds and by game’s end had run for more yards in an NFL regular-season game than any quarterback ever had.

“How many rushing yards did he have?” Tagovailoa wondered. “Like 200?”

He was told it was 178, breaking Michael Vick’s league record of 173 set in 2002 with the Atlanta Falcons. And Vick needed overtime, punctuating his explosive afternoon with a game-ending 46-yard touchdown run to beat the Minnesota Vikings.

As a runner, Fields was even more explosive than that Sunday.

“I’m happy for him. I’m happy for the success he’s finding. He’s finding himself in this league. People are starting to recognize (that) more, the more he gets out and has those opportunities to play.”

As impressed as the 62,377 fans inside Soldier Field were, as excited as Fields’ teammates and coaches seemed after the game, perhaps the most telling reviews of his day came from the visiting locker room with the victorious Dolphins amazed by what they had witnessed.

Miami defenders called Fields legit and special after a full day’s worth of stress and frustration while trying to contain the Bears quarterback.

“Justin Fields is as dynamic with the ball in his hands as any player in the league,” Dolphins coach Mike McDaniel said.

Remember, just last season McDaniel was the San Francisco 49ers offensive coordinator, watching All-Pro receiver Deebo Samuel rack up 1,770 yards from scrimmage and 14 touchdowns as a pretty dynamic player with the ball in his hands.

A case of Fields hysteria among Bears fans is one thing, totally expected as the city lines up to drink from the fountain of hope. Now, though, heads across the league seem to be turning with admiration and intrigue about what Fields is doing and where he might be headed. Even in a loss, this seemed to be a signature performance and possible catalyst for much bigger things.

The second-longest play of Fields’ career — run or pass — came on the Bears’ first drive of the second half, an electrifying 61-yard touchdown scramble on third-and-5.

Fields wanted to throw to Darnell Mooney over the middle, but Mooney turned away just as Fields was about to fire. So Fields turned on the jets, surpassing a running speed of 20 mph according to Next Gen Stats, and left five Dolphins defenders in his wake.

Tight end Cole Kmet was waiting at the Bears 45-yard line as a possible check-down option. Then Fields came whirring past.

“It was like, ‘Holy cow!’” Kmet said. “When he took off past me, it was pretty nice. I don’t know if there’s anybody else in the league that can do that.”

Of Fields’ 15 rushing attempts, nine came on scrambles. He had six runs of at least 12 yards. He again showed how electric he can be as a runner.

It has been a long time since Bears fans left a loss feeling so enthusiastic. That’s a credit to the energy Fields creates when he’s making big plays. Sunday’s four-touchdown outburst and a record-setting day on the ground elevated belief levels.

“The quarterback is the No. 1 position in this sport — and really all of sports,” Bears coach Matt Eberflus said. “So it’s really a joy to see him mature, see him get better and see him wanting to improve every single week. This week is going to be no different.”

Late in the first half, with a favorable one-on-one matchup against Dolphins cornerback Xavien Howard, Mooney ran a decisive and crisp corner route inside the red zone on third-and-8 from the 16. Fields trusted the play the whole way. He trusted the route combinations, trusted the pocket, trusted his arm.

Once Mooney set up Howard with his break, the Bears receiver knew the play was over.

“I just tried to run as fast as I could to the back pylon,” Mooney said. “I knew the ball was going to be up there.”

Fields knew Bears receiver Dante Pettis could screen Howard somewhat and then hold the safety with his post route. Fields focused on giving Mooney an ideal ball to catch.

“Really couldn’t ask for a better play call in that situation,” Fields said.

It would be hard to ask for a better throw and catch either.

That was the second of three Fields touchdown passes, the first game in his career in which he threw for three TDs. The other two scoring passes went to Kmet, both on well-designed play-action concepts.

Kmet’s first touchdown, from 18 yards out, was the result of a perfectly executed play fake by Fields, baiting the Dolphins defense to converge on what looked like a power run by Khalil Herbert. The play design did the rest, with Kmet sneaking out to the flat uncovered. It was a simple pitch-and-catch, and Kmet used a lead block from Equanimeous St. Brown to get into the end zone.

“That’s a play we’ve been working since really back to (organized team activities),” Kmet said.

Kmet’s second score, on a 4-yard reception early in the fourth quarter, again clicked with both Fields and Kmet selling the run. Once Kmet released from edge rusher Melvin Ingram, safety Javon Holland had little chance of catching up to him.

It’s another dash of statistical evidence that the offense is growing. The Bears are averaging 376 yards and 31 points over the last three games.

“It’s all about how we come to work each day,” Herbert said. “It’s executing with guys diving into the details of things.”

Eberflus is certain the production uptick is tied to adjustments the Bears made during their “mini-bye,” when they had 11 days between games against the Washington Commanders and New England Patriots and worked to tailor the offense around their players’ strengths.

For Fields, that meant finding adjustments that get him on the move more, both with designed runs and passing concepts that shift the pocket.

“We are doing a lot of good things in protection to help ourselves moving the pocket and giving sight lines and vision lines for the quarterback that he likes,” Eberflus said. “That is really good for him. He’s doing a great job with that.”

Is it nitpicking, amid all the Fields hype and hope, to point out the Bears lost Sunday? By three points. Despite having the ball twice down the stretch to tie the game or take the lead.

The results of those drives were as follows:

The Bears called 12 passing plays on those final two possessions yet wound up with only two completions for 3 yards.

The results of the other 10 plays: four incompletions, four tuck-and-run scrambles for 30 yards, two sacks.

The officiating crew missed a blatant pass interference penalty on Dolphins cornerback Keion Crossen against Bears receiver Chase Claypool with 1 minute, 29 seconds remaining, a blunder that cost the Bears 37 yards and a chance to move well within field-goal range with plenty of time left for a potential touchdown.

St. Brown then dropped Fields’ final pass, a well-placed, on-the-move dart that would have produced a gain of 12 to 14 yards on fourth-and-10.

Eberflus was asked about those game-deciding possessions and their value to a young quarterback and a growing offense that needs experience in such situations.

“It’s great to put them in the moment to win the game,” Eberflus said. “I told the guys in the locker room, ‘Guys, just keep working. Keep having determination. Get tighter as a group. We’re building the football team.’ They understand that.”

There are a variety of reasons the struggles of the Bears passing game haven’t fully dissipated. But the fact remains the Bears have the league’s least productive passing attack, averaging a paltry 125.7 yards. They’re 68 passing yards per game short of even cracking the top 25.

Fields has failed to pass for 200 yards in eight of his nine starts this season and 14 of his 19 career starts. Eventually, as electrifying as Fields is as a runner, he will have to become the pilot of a high-flying passing attack, too, showing consistent pocket poise and an ability to beat quality opponents in big moments with his arm.

Of the Bears’ 10 third-down conversions Sunday, six came on Fields runs. The Bears converted 3 of 7 third-down chances when Fields threw the ball, including a first-quarter deep ball to Claypool that drew a 28-yard pass interference flag.

Like Eberflus, Fields was asked after the loss about those two final scoreless possessions.

“We’d like to capitalize on that situation when we do have a chance to go down and score and tie the game,” he said. “Just have to execute on those big plays.”

The Bears didn’t and lost. And even with all of the encouragement from the offensive outburst, a chance to punctuate the day with a game-winning experience slipped past.

“That’s the next step, right?” he said. “We’re putting up points now; the past few weeks we’ve been able to do that. But if we want to be a championship team, that’s what the NFL is. It’s two-minute situations, end of half, end of the game, executing in those situations. That’s the next step for the offense.”