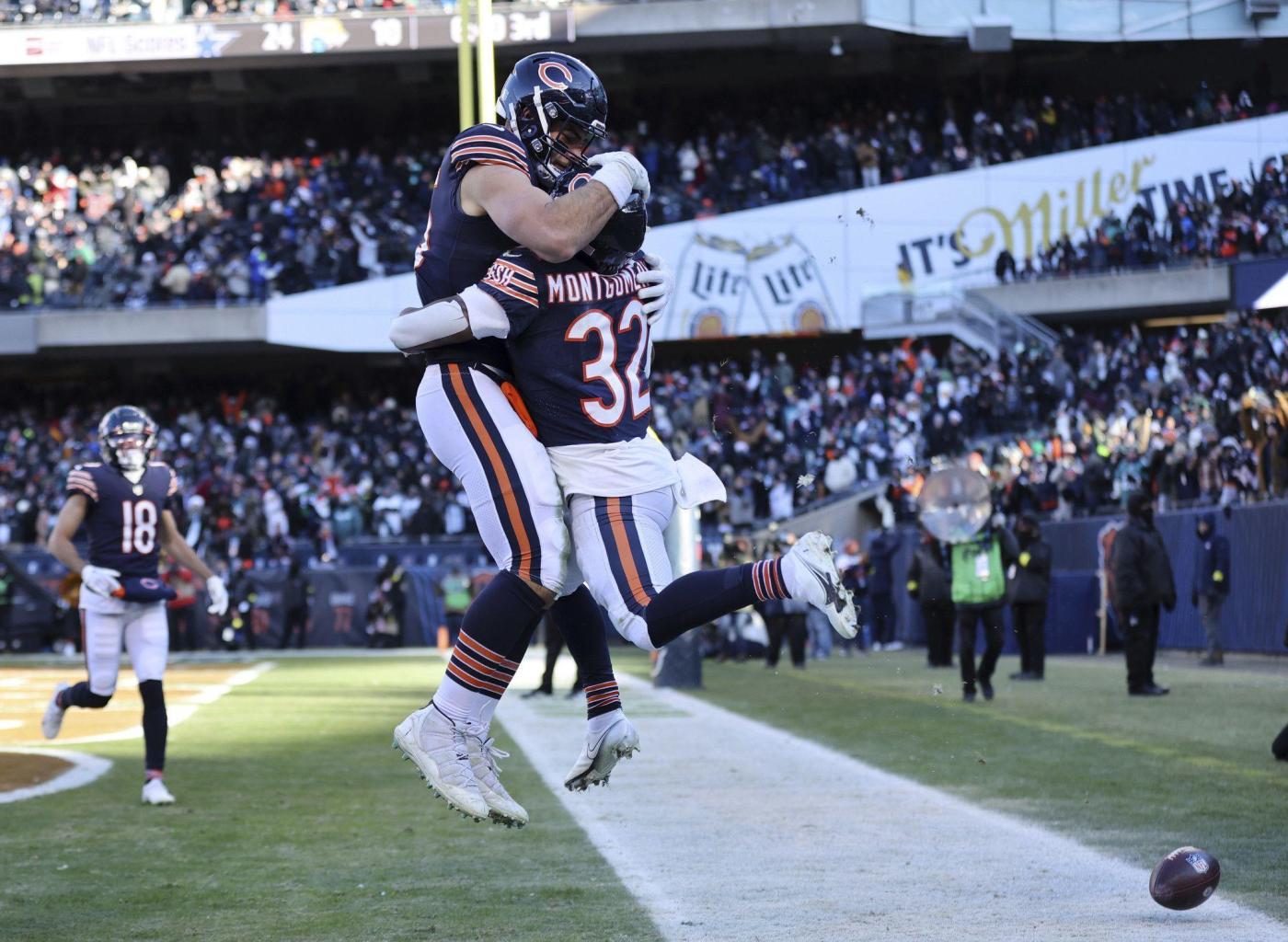 Chicago Bears quarterback Justin Fields couldn’t quite detail the feeling he has had recently, the vibe that has given him elevated certitude and composure within games. But on Thursday evening, three days before the NFC-leading Philadelphia Eagles came to Soldier Field with their nasty defense, Fields expressed eagerness to take on one of his biggest tests of the season.

Part of that was competitive drive. Part of it was confidence in his increasing understanding of the game and his offense.

“There’s just a certain way where you’ve got to kind of feel the flow of the game,” Fields said. “It’s hard to explain it, but once you feel it …”

In the latest show of growth from the 23-year-old quarterback, Fields held up Sunday against the Eagles in a way that should offer everyone at Halas Hall even more optimism.

No, Fields’ statistics weren’t spectacular in the Bears’ 25-20 loss. He completed 14 of 21 passes for 152 yards with two touchdown passes while rushing for another 95 yards. But all things considered, it was a promising outing.

The Eagles came in leading the NFL in sacks, interceptions and takeaways and had held opposing quarterbacks to a 76.9 passer rating for the season. Fields’ passer rating Sunday was 119.5.

He was sacked six times and fumbled once. Yet with the degree of difficulty of the defense he was facing and the handicap of being without receivers Darnell Mooney, Chase Claypool and N’Keal Harry and then losing Equanimeous St. Brown to a concussion on the third play, Fields’ performance was steady and impressive.

Most significantly, he played with big-game moxie that continued to exhibit that feeling.

At this point, all bets are off. On every play for the Bears offense, anything is possible now. Fields has become that magical, so breathtaking with his playmaking artistry and so darn explosive in his ability to turn nothing into, well, everything.

He has earned his membership card as a chicken salad maestro.

You saw what happened on the Bears’ fourth possession, the one that included a near disaster on a first-down snap from the Eagles 31-yard line. That’s when linebacker Haason Reddick dominated his one-on-one pass-rushing opportunity against Bears tight end Cole Kmet and hammered Fields for a strip-sack.

The football squirted free. Thankfully for the Bears, Michael Schofield and Alex Leatherwood showed enough hustle to prevent that fumble from being lost. But the Bears were facing second-and-27 on a seemingly doomed drive. Until Fields did that whole Fields thing, that off-script, David Blaine-style magic that creates both astonishment and an adrenaline rush.

Reddick beat Leatherwood with a ridiculous pass-rush move and had Fields captured in the pocket with his right arm wrapped around the quarterback’s shoulder. But sSomehow, with his strength and agility, Fields turned that sack attempt into his personal slingshot, escaping Reddick’s grasp and rocketing into the open field.

In one breath, the Bears went from staring at third-and-34 from their side of midfield to readying for first-and-goal from the Eagles 9. Are you kidding?

That was a 39-yard scramble from Fields and almost a 48-yard touchdown run. Eberflus was across the entire field, twisting and craning his neck to watch every twist and turn of the roller-coaster ride.

It wasn’t just the escape from Reddick. Fields also made a swift cut left around linebacker T.J. Edwards near the 30 before dodging defensive backs K’Von Wallace and Avonte Maddox inside the 15. And his final spin and cut back toward Soldier Field’s south end zone — while it didn’t count because he stepped on the sideline — showed determination to get to the goal line no matter what.

“Justin has impressed the world,” receiver Byron Pringle said. “That’s not a question. With Justin, you never know what you’re going to get. I grew up watching Michael Vick and he moves just like him. You never know.”

This was the latest evidence of who Fields has become, one of the most electric playmakers in football with the ability to juice an entire team and an entire stadium with one play. Like Khalil Mack did in 2018. Like Devin Hester did through most of his eight seasons in Chicago. Like, dare we say it, Walter Payton and Gale Sayers often did.

On the snap after Fields’ big run, the Bears were in the end zone, celebrating David Montgomery’s go-ahead 9-yard touchdown run. Because of course.

The Bears now have the ultimate eraser in their starting quarterback.

Third-and-34? Never existed. Second-and-27? No big deal. Just a 39-yard explosion to set up first-and-goal and an easy TD touchdown.

In the fourth quarter, with the Bears trailing 17-13 and sniffing a potential upset, Fields broke free for an 18-yard scramble that was negated by a Braxton Jones holding penalty. When the play ended, Fields stayed down, experiencing discomfort in his right leg.

As it turned out, Fields was just cramping. But “just cramping” triggers greater concern after Fields dealt with similar problems in the second half of the Week 11 game in Atlanta. This time Fields had to leave the field, limping back to the Bears locker room to get an IV.

“That was a little stressful,” Eberflus said.

“Is what it is,” Fields said. “I’d rather be cramping than it be a serious injury.”

Without Fields, the Bears’ third-and-13 play was an incomplete pass from Nathan Peterman to Nsimba Webster.

Right now, few fans care much about the results of games or even the situational failures that have contributed to the team’s seven-game skid. But eventually — and hopefully sooner rather than later — Fields and the Bears will be playing games with higher stakes and greater magnitude. And in the fourth quarter of a four-point game, they can’t afford for their starting quarterback to go missing in action because of cramping.

“It’s happened a couple of times,” Eberflus said. “He’s just got to be mindful of it and come up with a plan that works for him. His body is different than everybody else’s body.”

To Fields’ credit, he returned to lead a touchdown drive on the next series. But in between his exit and his return, the Eagles used a six-play, 75-yard touchdown march to go ahead 25-13 and effectively put the game out of reach.

That was just an unfortunate setback in a predictable loss to a better team. But Fields and the Bears better make efforts to get his cramping issues rectified so they don’t pop up in more significant moments.

“I have to get an IV before every game,” Fields said. “I didn’t get one today because I thought with the (cold) weather, I wouldn’t need one. But I’m still exerting energy, still using my body. From now on I’m going to have to get an IV.”

Added Eberflus: “It’s something where we plan ahead. Sometimes you’ll do it a day or two ahead and just keep it progressing. Hopefully we’ll get it handled.”

Two plays before his dazzling scramble, Fields delivered one of his five best throws of the afternoon, a 21-yard completion to Montgomery as the Bears quarterback evaded pressure from a six-man rush, escaped the pocket to his right and kept his eyes up in order to find his safety valve. A pass completed 5 yards beyond the line of scrimmage not only converted on second-and-8 but became a chunk play, the third-longest gain of the day for the Bears.

That’s the combination of calm and comfort that has Fields on an escalator toward full quarterback command. His two scoring passes offered additional evidence.

On the first, a 10-yard strike to Montgomery, Fields and the Bears used a quick cadence to stagger the Eagles defense, breaking the huddle, lining up quickly and snapping the ball right away.

“Usually when we get up on the line like that and snap the ball, they don’t have time to communicate who has the back,” Fields said.

With a Cover-0 blitz coming, Fields identified what he was seeing and made a quick, decisive read to Montgomery. Again, the pass didn’t travel far, caught a yard behind the line of scrimmage. But it turned into a walk-in touchdown.

“He was wide open,” Fields said.

Last week Eberflus stressed his desire for Fields to complement his highlight-reel playmaking with a healthy dose of success on simpler plays.

“He can make dynamic plays,” Eberflus said. “But we want to see the ordinary plays also — the check-downs, the easy passes. Take what the defense gives you. All those types of things that he thinks he needs to improve on.”

Fields offered a handful of those Sunday.

His second touchdown toss, a 35-yarder to Byron Pringle, came with Fields on the move to his right after escaping from the pocket. With the Eagles defense so worried about getting beat by another back-breaking scramble, Pringle slipped behind cornerback Darius Slay and went uncovered down the right sideline.

“From looking at their defense pre-snap, I knew their coverage,” Pringle said. “They were with one high (safety). And I knew nobody else was behind to help once Justin started scrambling. So I just eased my way back and Justin saw me and threw the ball up to me like an (alley)-oop. Those are the hardest catches to get. I had to watch it all the way in.”