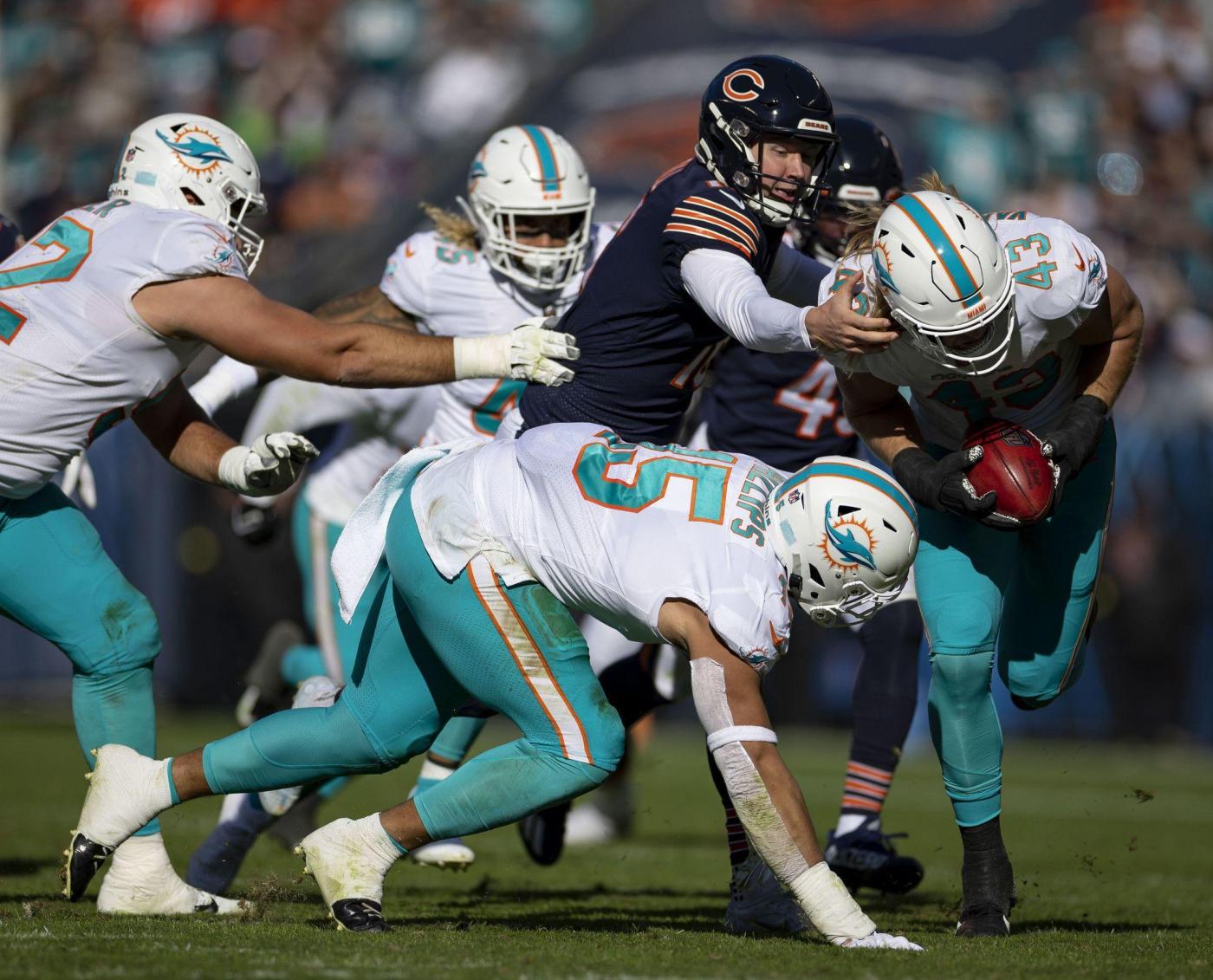 Truth be told, Justin Fields wanted to throw the ball to Darnell Mooney. That’s where the Chicago Bears quarterback was looking on third-and-5 in the third quarter Sunday.

Against a zone look, Fields thought he had Mooney breaking open over the middle. But just as Fields was about to pull the trigger, Mooney turned in a different direction.

Fields pulled the ball back.

“At that point,” he said, “instincts took over.”

Instincts pulled him forward in the pocket. His eyes suddenly saw an express lane with minimal congestion. He hit the gas and split three Miami Dolphins defenders.

Into the open field he went, full acceleration.

“It was like, ‘Holy cow!’” tight end Cole Kmet said. “When he took off past me, it was pretty nice. I don’t know if there’s anybody else in the league that can do that. Really. That was pretty special.”

Bears coach Matt Eberflus watched it unfold right in front of him. Asked what he saw, Eberflus lit up.

“Speed,” he said. “I saw speed and his elusiveness. Once he gets into the open field, he runs away from pretty much most people.”

“You kind of see that look in his eyes when he’s going to take off,” Kmet said. “And you just know to get out of the way and let him do his thing.”

That was the longest run of Fields’ career, part of a record-setting and energizing performance in the Bears’ 35-32 loss to the Miami Dolphins.

Early in the fourth quarter, on a 14-yard scramble, Fields broke the single-game franchise record for rushing yards by a quarterback. That 50-year-old mark of 127 was held by Bobby Douglass.

On the next possession, Fields broke the NFL record of 173 set by Atlanta Falcons star Michael Vick in 2002.

“He’s going to continue to break a lot of records,” Mooney said. “So be ready.”

Fields finished with 178 rushing yards. For good measure, he also threw three touchdown passes, including a 16-yarder to Mooney in the second quarter and two to Kmet.

For those seeking signs of hope from this 2022 season, particularly from Fields and the offense, they are now there — and showing up weekly.

The Bears offense has found a groove since mid-October, averaging 376 yards and 31 points over the past three games.

“We are really maximizing our strengths and minimizing our weaknesses right now,” Eberflus said.

In a season that will be judged most heavily on how much growth Fields and the offense make, close losses like Sunday’s won’t sting Bears fans nearly as bad as they once might have.

As long as QB1 is showing flashes of playmaking brilliance on a regular basis, it will become easier to look past the shakiness of the defense. That unit’s shortcomings were evident as Dolphins receiver Tyreek Hill totaled 143 receiving yards, scored on a 3-yard pass from Tua Tagavailoa and drew a 32-yard pass interference penalty in the end zone to set up another Dolphins score.

Fields’ production also will make it easier to push special teams gaffes to the side, such as the breakdown in punt protection in the second quarter that allowed Dolphins linebacker Jaelan Phillips to block Trent Gill’s punt. Andrew Van Ginkel returned that loose ball 25 yards for a score.

Instead, Chicago’s focus will center more around Fields’ developmental climb. And make no mistake, Sunday’s performance was encouraging at the very minimum and absolutely intoxicating to many. Eberflus called it “a huge step.”

“We have a young football team,” he said. “We are building upon that. And the centerpiece of that is the quarterback.”

Still, a finishing touch was missing. Twice Fields and the Bears had the ball in the fourth quarter with a chance to put together a game-tying or go-ahead drive. And twice they failed.

On those two possessions, they called 12 passing plays but wound up with only two completions for a total of 3 yards.

“You want to become a threat (at the end of games) and have dominance with that and make teams be scared to have us in that situation.”

For a young Bears team, those kinds of situational experiences should prove invaluable to the maturation process. Eventually all judgments will hinge upon how the Bears and their offense respond to those game-on-the-line moments.

“We have to find a way to put together a drive there,” running back Khalil Herbert said. “Everybody in here feels the same way.”

Added Kmet: “We had opportunities, man. Since I’ve been here, the defense has always been picking us up. You want to have a chance where the offense picks the defense up. This was our chance today and we didn’t do it.”

Yes, there was a Fields deep shot to Chase Claypool that fell incomplete on the final drive after Dolphins cornerback Keion Crossen pulled Claypool backward from the waist before the ball arrived.

Officials missed that one.

“After I saw it on the (video) board, it was definitely (pass interference),” Fields said. “For sure.”

Added Claypool: “Justin threw me a good ball to give me a chance. I felt like I was getting pulled back a little bit. But you still have to try and fight through that.”

And, yes, on Fields’ 28th and final pass of the day, receiver Equanimeous St. Brown dropped what would have been a chain-moving reception on fourth-and-10 that could have kept the Bears alive.

But if Bears fans want Fields to be their forever quarterback, they can’t be allergic to nuance or constructive criticism when it comes to evaluating the second-year quarterback and the offense he leads.

Over time, if the Bears want to entertain legitimate championship hopes, Fields will have to become capable of doing much more damage as a passer. He threw for only 123 yards Sunday, the eighth time in nine starts this season he has been held below 200.

Fields also had 10 tuck-and-run scrambles against the Dolphins. Those are symptoms of a passing attack that’s still not quite working the way it’s supposed to — for a variety of reasons.

To Fields’ credit, his abilities as a runner are special and often breathtaking. There were moments Sunday when Dolphins defenders seemed like third-graders trying to catch a rabbit in the park.

“He’s as fast as any skill-position runner,” Dolphins coach Mike McDaniel saud. “Like he is really, really fast. And he can cut and break tackles. There are a lot of running quarterbacks. This one in particular is very elite and adept at that.”