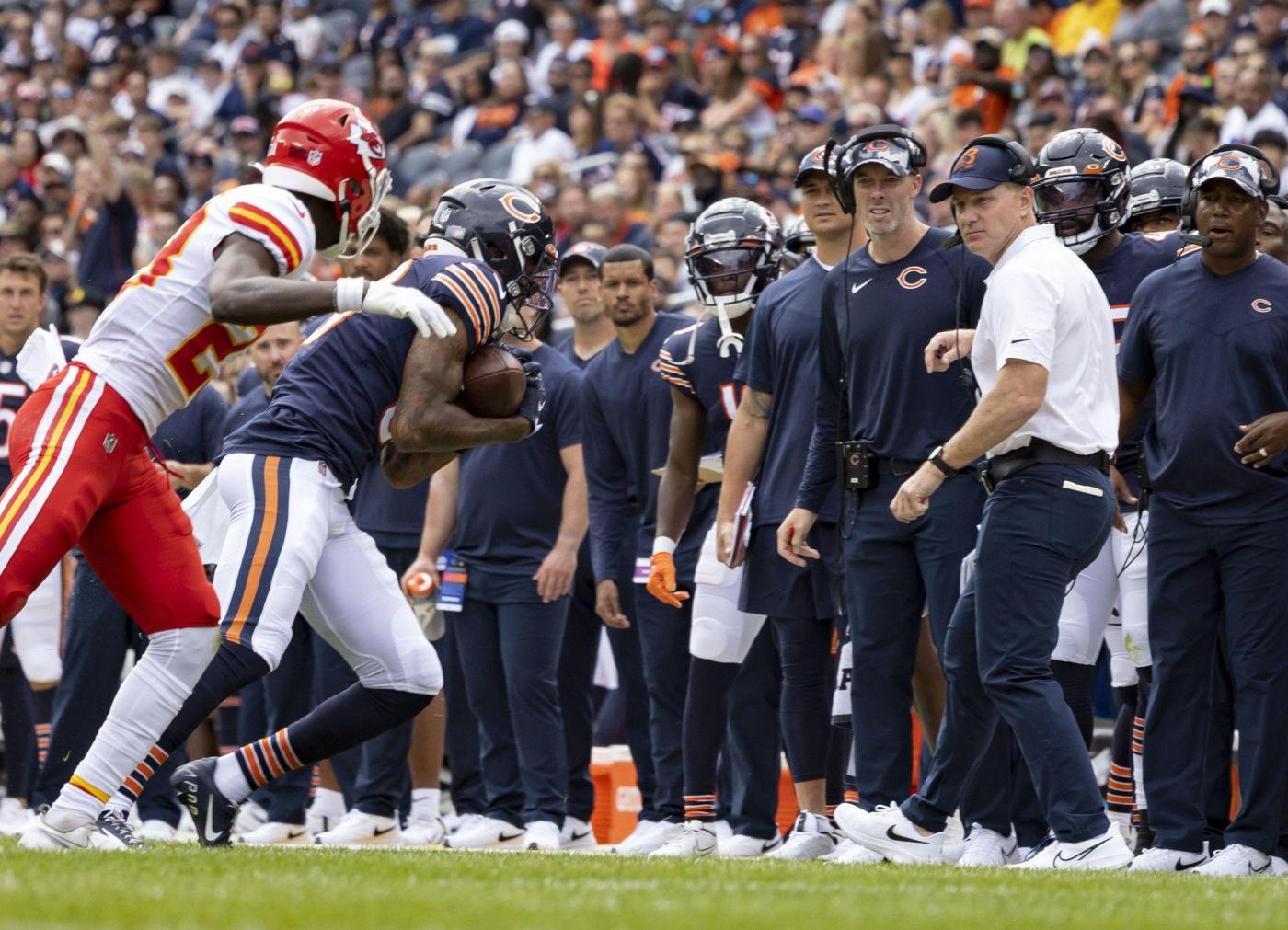 On the Chicago Bears’ second offensive series of the preseason, on a third-down play from their 38-yard line, quarterback Justin Fields broke the huddle and set himself in the shotgun with positive vibes.

Fields scanned the Kansas City Chiefs defense, recognized the man coverage he would be facing and identified a matchup he loved with his favorite receiver Darnell Mooney in the slot to the left against cornerback L’Jarius Sneed.

“I pretty much knew what was going to happen,” Fields said.

With a look he loved and enough protection in front of him, Fields hit the top of his five-step drop and launched — on time and in rhythm. Mooney, with a crisp outside release on a fade route, got a bit of a pick from fellow receiver Equanimeous St. Brown and created separation. Fields’ ball was on Mooney’s back shoulder, requiring a slight adjustment but keeping safety Juan Thornhill at bay.

Mooney twisted, jumped and hauled in the football for a gain of 26 yards.

“I think Darnell knew where I was going to put that ball,” Fields said.

Added Mooney: “I just went and grabbed it. We had an opportunity to make ourselves a play. And it was nice to get that in game-like conditions going against some other guys.”

In terms of yardage gained, that was the Bears’ biggest play from scrimmage in their 19-14 victory at Soldier Field, a 26-yard chunk play that brought the crowd to life — at least for a few moments. An argument could be made that that deep shot was also the team’s biggest play as far as future potential is concerned.

Look, August in the NFL is always a search for promising signs. And that Fields-to-Mooney connection Saturday qualified as one bright spot during an afternoon in which the rebuilding Bears looked very much like a team with a long, long way to go to compete at the highest level.

Still, when the chemistry between the quarterback and the top receiver is evident, it’s at least a little something to feel good about, right?

“I think that was a routine play for us,” Fields said. “It was, of course, a great catch by (Mooney). But we’ve seen that many times. So it was no surprise.”

That’s a significant big-picture goal for Fields and the offense, to more consistently feel like their big plays are routine. And with four weeks left until the regular season begins, the established and still-growing connection between Fields and Mooney remains noteworthy.

To be clear, the production of the Bears’ first-unit offense Saturday was far from spectacular and barely satisfactory. Fields took 18 snaps over three possessions with the Bears managing all of 78 yards and four first downs.

From the start of training camp through Saturday’s victory, there has been little evidence to believe that a significant offensive breakthrough is coming anytime soon. But internally, the baby-stepping Bears are eagerly identifying things they can build on.

Coach Matt Eberflus, for one, applauded the way Fields operated, handling the huddle and showing a feel for the game.

Mooney recognized the offense was playing behind a work-in-progress line without the services of receivers Byron Pringle, Velus Jones and N’Keal Harry, who are out with injuries. In addition, starting running back David Montgomery and tight end Cole Kmet sat out.

“Definitely a lot of guys missing right now,” Mooney said. “But with the guys who are here, I feel like we executed well. I’m interested to see (on video) how smooth it was.”

If the Bears wanted a glimpse of what they’re one day striving to become, Chiefs quarterback Patrick Mahomes happily obliged. Overseeing just one drive Saturday — and really just looking to break a sweat and relax — Mahomes took the Chiefs on an 11-play, 72-yard march into Soldier Field’s north end zone.

The 2018 league MVP and Super Bowl LIV champion spread his six completions around to six receivers and finished the series with a 5-yard screen pass to tight end Blake Bell for a touchdown.

“We did what we were supposed to do,” Mahomes said.

Perhaps one day, Fields and the Bears will be able to expect similar efficiency and ease in how they carve up opposing defenses. But for now, they’re in a different stage of the grind with a less experienced quarterback learning a new system with so many new faces all around.

To Fields’ credit, his first-blush review of the early offensive output was appropriately subdued.

“I think it went all right,” he said. “There’s always room to improve.”

Fields was asked what he was most looking forward to dialing in on when he had his first chance to review the 18 plays.

“I’ve got to dissect every play,” he said. “Go back to my rules. What am I supposed to do on this play? (Look at) protection and stuff like that. It’s just being process-driven and making sure I did my job.”

For an NFL starting quarterback with the grandest of ambitions, the celebration of 26-yard completions can go only so far when points aren’t added to the scoreboard.

So Fields would be the first to acknowledge that the Bears’ climb barely has gotten started.

He did add another crowd-pleasing completion late in the first quarter, recognizing extra Chiefs pressure coming before the snap, adjusting the protection, then hitting Tajae Sharpe on the right sideline to convert third-and-9.

“Justin did a great job of putting it in a spot where only I could get to it,” Sharpe said.

Much of the Bears fan base reacted similarly.

Hurray! Now … more of that. Much more.

For the record, the Bears scored all 19 of their points after halftime with backup quarterback Trevor Siemian leading two touchdown drives and a short-field field-goal series. Siemian hit rookie Trestan Ebner with a 12-yard touchdown pass over the middle and later connected with Dazz Newsome for a 13-yard score.

Cairo Santos added field goals of 20 and 47 yards to punctuate the victory.

Now the Bears will flip the page with training camp practices Monday and Tuesday followed by a second preseason game Thursday night in Seattle against the Seahawks. At this stage in the growing process, Fields and the offense must take all their victories, however small they might be, and pocket them without apology. But they also must demand more of themselves, striving to produce big plays and bright moments far more frequently.

Said Fields: “We’re just going to keep working, keep stacking days and continue to get better with the small details.”