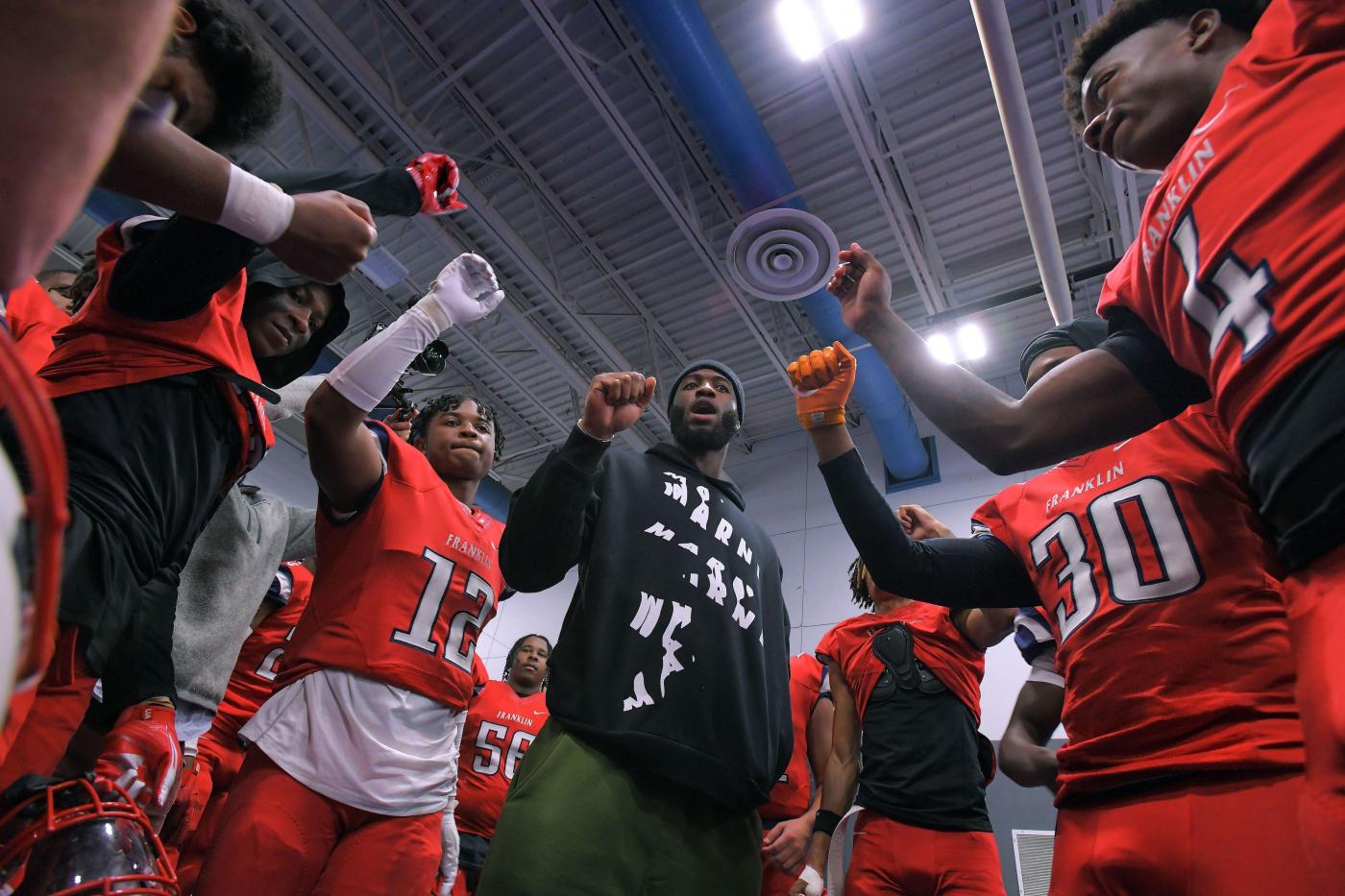 Kamari Brathwaite loves to play on both sides of the ball. On Friday night in Reisterstown, the Dundalk football team was sure glad he did.

Brathwaite scored the game’s only touchdown and recorded an interception, and the Owls’ defense did the rest in a key 7-0 win over Franklin in a Baltimore County League game that served as the Ravens RISE High School Showdown.

“It’s big to win here,” Fiorenza said of winning on Franklin’s field. “I know I’ve taken a few losses here. I think this is the first time Dundalk’s won here since 2015. Our O-line and defense played great for us tonight.”

The teams played scoreless well into the second quarter, but then the Owls got a short field and cashed in a few plays later. At his own 19-yard line, Franklin quarterback Billy Hartman threw a pass that was picked off by Dundalk’s Adonis Fuller with 1:39 left in the first half. The Owls got the ball at the Indians’ 14, and Brathwaite made them pay three plays later when he drifted into the corner of the end zone and outjumped a Franklin defender for the game’s only touchdown.

“He was playing off me a little, and I knew I had to make a play,” Brathwaite said. “It was a called play, and I just went up and got it.”

“I told our coaches we should try and isolate Kamari. He was playing well, and we needed to take a shot,” Owls coach Tom Abel said. “He’s our biggest receiver, and he came up big for us.”

On the first play of Franklin’s next drive, Brathwaite picked off Hartman at the Dundalk 49.

Franklin (4-3, 4-2) mounted a few drives in the second half, but the Indians’ best chance to score came on their last possession.

Franklin took over in great field position after a 30-yard punt return by Jamari Lewis set the Indians up at the Dundalk 33. Three plays and two penalties into the drive, Franklin faced a third-and-21, but freshman quarterback Zander McCracken found receiver Khalil Bilal for a 33-yard completion to the Dundalk 11 with 1:37 left. As it had done all night, the Owls’ defense stiffened and held Franklin to no gain on four plays.

After that, Dundalk ran out the clock.

“We’re a high-pressure team on defense, and it paid off for us,” Abel said. “We like to mix and match coverages and fronts, and I think we confused them a little. That’s a good team we beat over there. We earned this one, but we earned it in a little different way.”

Franklin coach Anthony Burgos said he was happy with the effort his team gave despite the outcome.

“We’re still trying to find ourselves. We need to learn how to do things like finish drives, and we didn’t do that,” he said. “All year we’ve played solid defense, and I think we did that again tonight. We played a freshman quarterback in the second half, and four to five freshmen and sophomores at other spots, so we’re still young. I think we fought hard, and we’ll go back and watch the film and make the corrections.”