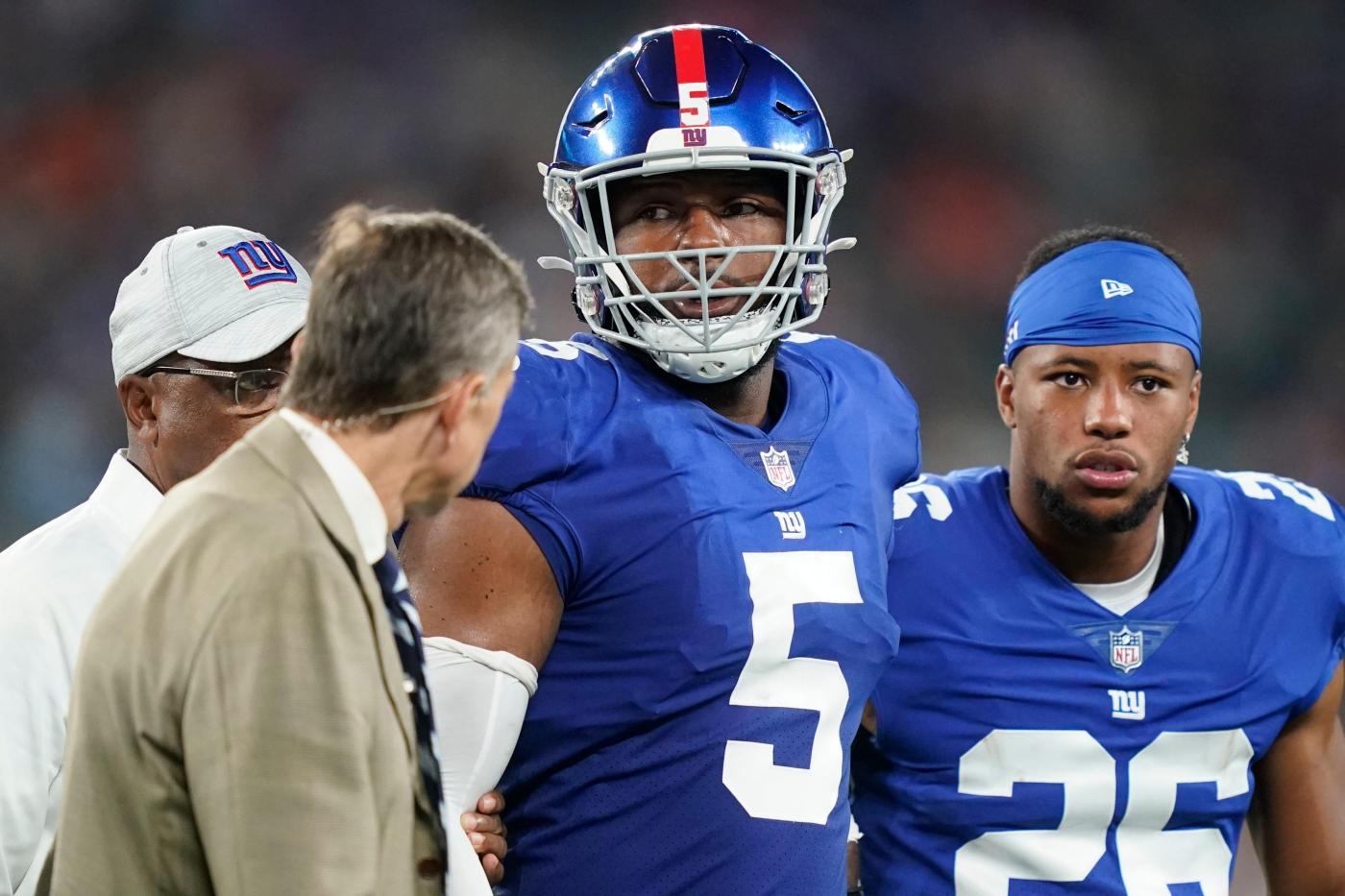 The No. 5 overall pick had his knee buckled in the second quarter on a low block by Bengals tight end Thaddeus Moss, the son of Hall of Fame receiver Randy Moss.

Thibodeaux was optimistic postgame as he walked with a slight limp out of MetLife Stadium under his own power. He said he’d already received good news.

“I’ll be back,” he said confidently, nodding yes. “We [are] good. Good news and good wishes.”

“I can’t answer that yet,” Daboll said. “I think they’ll do the tests, the MRI, stuff like that, and get a better feel for it in the morning. I hope not, but I don’t know the answer to that yet.”

The injury looked bad at first. Thibodeaux stayed down on the turf for a while after Moss’ legal block, grabbing his right knee and grimacing.

When the cart came out, Thibodeaux at least stood up and declined to get on it. He walked slowly to the Giants’ sideline and medical tent, instead.

But when he emerged, he said a few passing words to some teammates on the sideline, then left for the locker room with a team trainer and was promptly ruled out.

“I think it was a pretty scary moment there,” Jones said of his view from the sideline. “You never want to see anyone go down. So we’ll see. It was a tough play. You kind of saw the block and collision there. Hope he’s alright.”

Eventually, Davis Webb’s two fourth-quarter touchdown passes to wideout Alex Bachman lifted the Giants to a 2-0 preseason record, with one game against the Jets remaining.

Edge Tomon Fox forced a fumble at the buzzer by Bengals receiver Trenton Irwin that was recovered by corner Olaijah Griffin.

Still, the scary sight of Thibodeaux down—plus a second-half left knee injury to rookie linebacker Darrian Beavers—cast a shadow over the win and the biggest plus of the night:

Jones completed eight straight passes on the drive and pumped his fist as rookie running back Jashaun Corbin plunged into the end zone for a 2-yard TD run and a 7-3 lead early in the second quarter.

“I thought it was an important drive for us to get down there and finish it like we did,” Jones said. “I think we were all pretty pumped up.”

Jones hit on 8-of-9 passes for 78 yards on the 11-play, 84-yard scoring drive that straddled the first and second quarters. He did it without Saquon Barkley, who didn’t play in a coach’s decision by Daboll.

“I thought [resting Barkley] was probably best for the team,” Daboll said. “He’s had a good camp and I gave him the night off basically.”

And Jones did it despite disappointing finishes to the Giants’ first two possessions.

The Giants’ first drive had stalled on a 4th and 1 Antonio Williams run that the Bengals stood up at Cincinnati’s 48-yard line.

Jones’ second drive had ended with an interception by Bengals safety Dax Hill on a pass that tipped off the hands of tight end Daniel Bellinger. Hill returned it to the Bengals’ 49.

But Jones responded with the help of wide receiver David Sills, his offseason training buddy making his first preseason appearance after missing the New England opener.

Sills caught three passes for 46 yards on the drive, including a beautiful 20-yard back shoulder throw and catch up the left side.

Jones’ final stat line was a breath of fresh air even with the turnover, completing 14 of 16 passes for 116 yards and directing that touchdown drive—albeit against the Bengals’ backups.

Daboll had wondered whether or not he should play Jones, due to all the offensive line injuries. But it ended up being the right decision to suit him up.

The pass protection was good for Jones, too, despite rampant injuries up front. Max Garcia, the team’s sixth-string center, got the start with Devery Hamilton at left guard.

Left tackle Andrew Thomas played one quarter and then came out of the game in the middle of Jones’ touchdown drive. Hamilton kicked out to tackle and Will Holden entered at left guard. Holden, a tackle, then filled in as Garcia’s backup center.

Kicker Graham Gano went down with a concussion trying to tackle Evans. Kick returner C.J. Board, who’d had a 57-yard kick return wiped out earlier by an Oshane Ximines holding penalty, fumbled the Giants’ next kickoff and then left with a rib injury.

That means seven of the Giants’ 11 rookie draft picks have missed at least some time this preseason due to injury, including three who left Sunday’s game alone.

Tyrod Taylor replaced Jones after three series and got some work in behind parts of the first-team and second-team offensive lines. But Webb impressed with the third team, completing 22 of 27 passes for 204 yards and two scores to Bachman.

Bachman racked up 11 catches for 122 yards and two TDs.

Punter Jamie Gillan, a lefty, also made a 31-yard field goal and an extra point with Gano sidelined, and safety Julian Love holding. It was Gillan’s first time ever kicking a field goal in a game, and Love’s first time holding.

So there were several positives. But the unknown of Thibodeaux’s injury loomed largest heading into Monday morning.