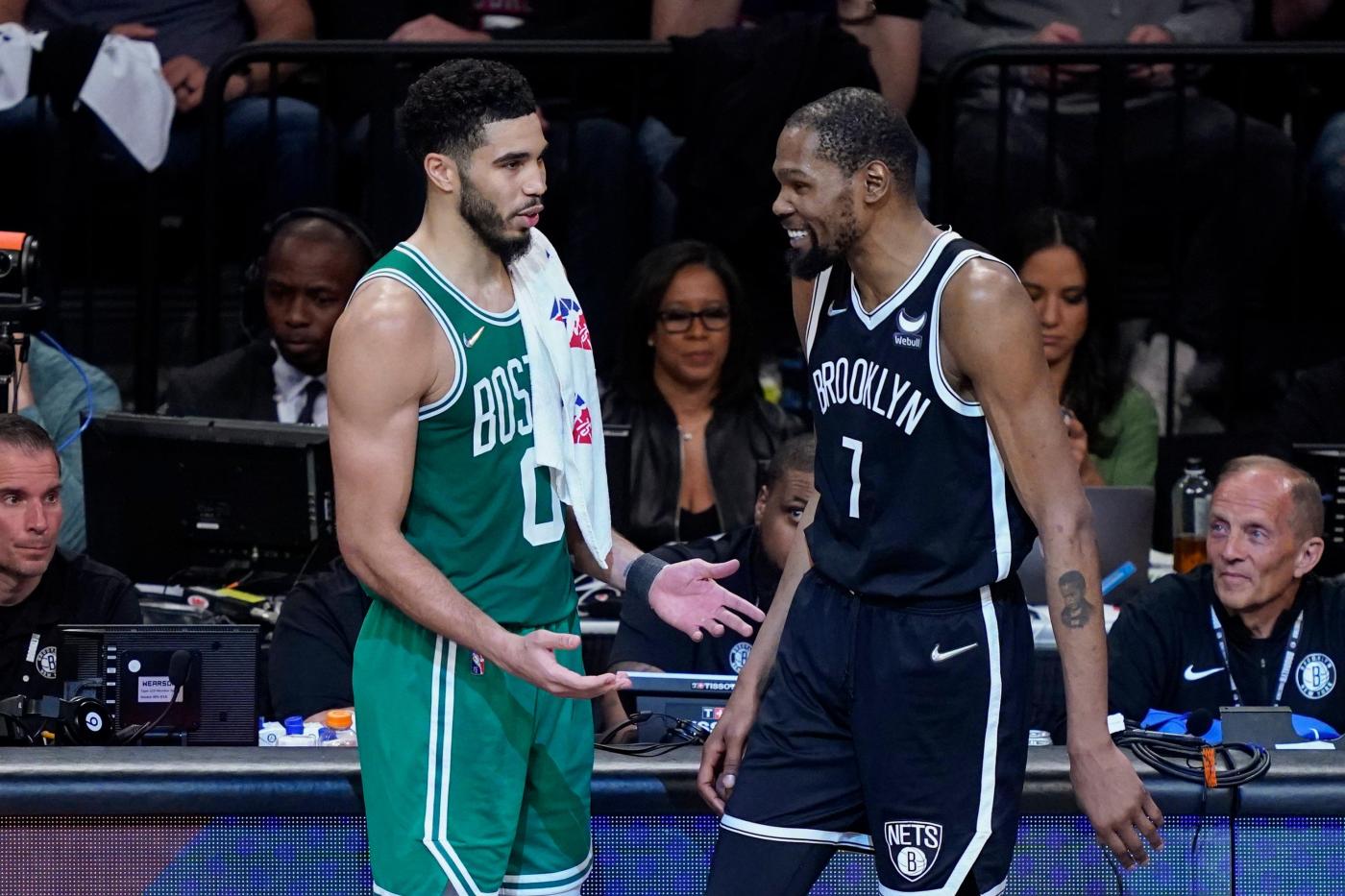 A new team has joined the Kevin Durant sweepstakes, and it’s the same team that pried away the Nets’ last superstar.

After acquiring James Harden in a Ben Simmons swap last season, the Philadelphia 76ers have joined the pursuit of the 12-time All-Star and two-time NBA Finals MVP, according to SNY’s Ian Begley, who reported there are “high-ranking members of the Sixers who’ve felt strongly about engaging with Brooklyn on a Durant trade.”

The SNY report, however, noted the Boston Celtics as Durant’s current preferred trade destination and added an additional tidbit: Durant wants to play with reigning Defensive Player of the Year Marcus Smart if he’s moved to Boston. The Nets reportedly rejected Boston’s trade offer of All-Star wing Jaylen Brown, reserve guard Derrick White and a first-round pick, then countered, asking the Celtics to include Smart, an additional rotation player and additional draft compensation.

Philadelphia’s interest in a Durant deal makes sense given Tobias Harris’ large salary and lack of star-level production. Harris averaged 17 points, seven rebounds and 3.5 assists per game last season — about on par with his career averages — but never eclipsed 14 points in any of the Sixers’ final four playoff games in their second-round playoff loss to the Miami Heat.

It’s unclear whether or not the Nets would want Harris, 30, in any Durant deal, and assuming MVP runner-up Joel Embiid is untouchable, budding young guard Tyrese Maxey would be the highlight of any deal done with Philadelphia. The Celtics can offer a surefire All-Star in Brown, one or both of forward Grant Williams and center Robert Williams, a first-round pick in 2025 and the lesser of their first-round picks in 2028, when the Spurs own swap rights on Boston’s pick.

Elsewhere, there doesn’t appear to be much traction on a Durant deal, though the Los Angeles Lakers are now reportedly willing to include both 2027 and 2029 first-round draft picks in a deal for Kyrie Irving. Earlier in the offseason, the Nets were unwilling to take back Russell Westbrook in any Irving deal. It is unclear if their stance remains unchanged or could change depending on what is received in a potential Durant deal.

A deal with the Phoenix Suns, Durant’s first preferred trade destination, was shut down when Deandre Ayton signed an offer sheet with the Indiana Pacers. The Suns matched Ayton’s offer sheet — the largest in NBA history at four years, $133 million — and now cannot trade him to the Pacers for a year or to any team without his consent. The path to a Durant trade to Phoenix would have needed to include a sign-and-trade with Ayton.

That largely leaves the Celtics and 76ers, according to SNY, and the Sixers don’t have attractive enough assets to get a deal done. They can’t trade P.J. Tucker, Danuel House or De’Anthony Melton until Jan. 15 because they all just recently signed contracts when free agency began. Brooklyn’s asking price has remained consistent: They want an All-Star, impact players and draft compensation to part ways with a top-five player in the NBA and one of the more gifted scorers in NBA history. After the Jazz acquired five draft picks, four rotation players and a rookie in the Rudy Gobert deal, no team has been able to meet Brooklyn’s asking price.

If the Nets are unable to strike a deal soon, however, they will run the risk of muddying training camp waters and tanking yet another season before it begins. Durant has already created an almost impossible environment in Brooklyn, delivering Nets governor Joe Tsai an ultimatum over the weekend: Either trade me or fire both GM Sean Marks and head coach Steve Nash. Once the reports of the meeting broke on social media, Tsai responded on Twitter, vouching for those Durant wanted out.

“Our front office and coaching staff have my support,” he tweeted. “We will make decisions in the best interest of the Brooklyn Nets.”

The decision best for the Brooklyn Nets would have been bringing a happy Durant — and Irving — into training camp with a healthy Simmons, but happiness in Brooklyn has long gone for the self-proclaimed Easy Money Sniper. The News reported Durant reporting to camp is not a foregone conclusion if a deal does not get done.