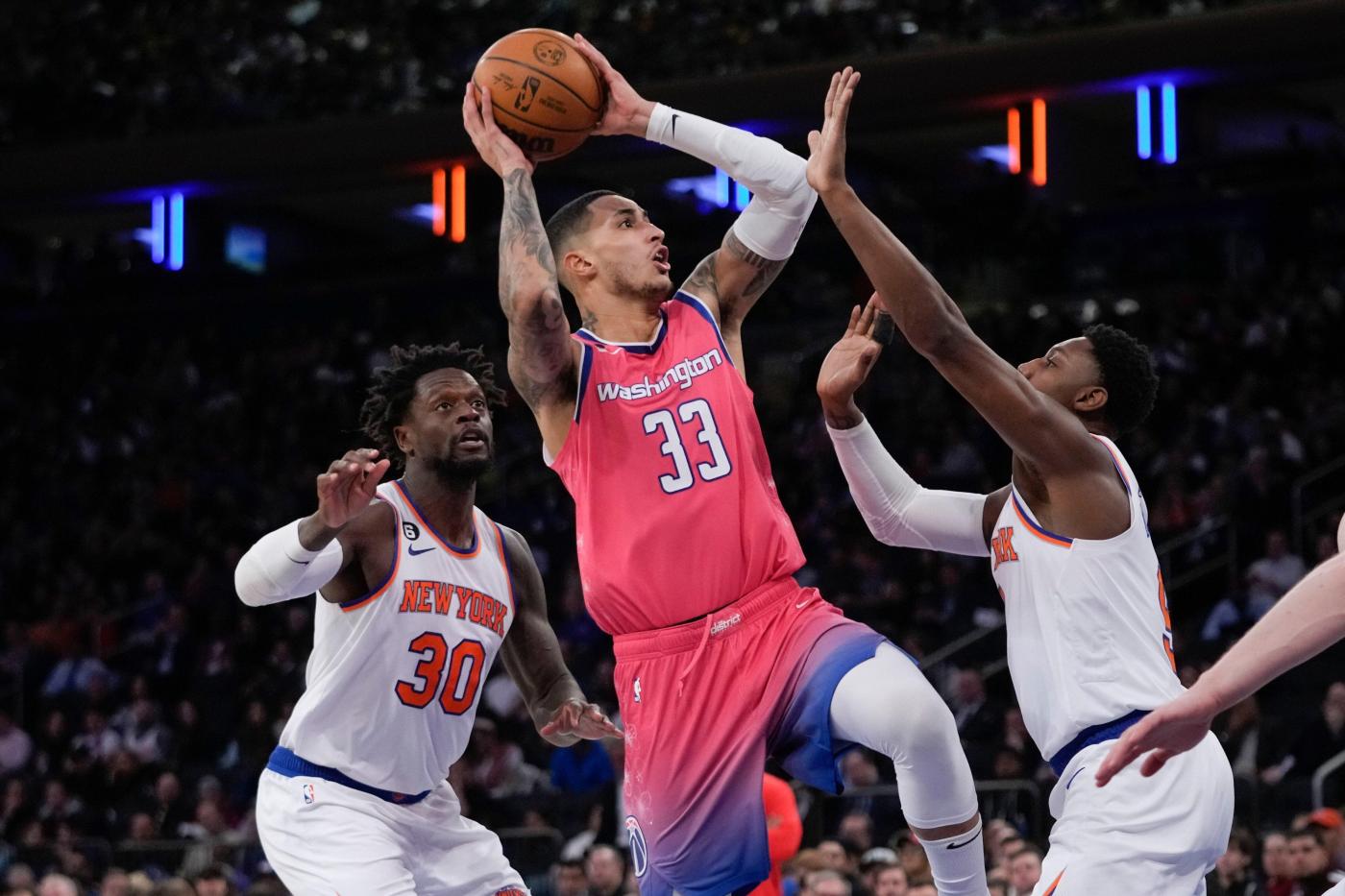 A deflating defeat at MSG ended with a fan sitting in the upper deck, one of the few remaining in the final seconds, shouting, “You guys suck.”

“Write that there was no heart,” that same fan buzzed at the press as he left for the exit.

It was that kind of night.

Not only was the hated Kristaps Porzingis leading the Wizards to a 116-105 victory Wednesday, the Knicks lost their starting center and defensive anchor.

Mitchell Robinson suffered a “sprained thumb” in the first quarter, according to the Knicks, and was ruled out for the remainder of the game. Robinson clipped the head of Bradley Beal, who was driving into the paint, and suffered immediate discomfort. The Knicks said he’ll undergo further tests Thursday.

Without Robinson, the Knicks’ posture was low energy and they were torched on the glass while giving up 12 offensive rebounds just in the fourth quarter. Porzingis (22 points) and Kyle Kuzma (27 points) feasted from beyond the arc. The Knicks (25-21) trailed by double-digits for most of the second half.

The Knicks dropped the Wizards fairly easily just five days prior in Washington. But those Wizards were missing star Beal, who returned from an injury absence Wednesday to score 18 points on 7-for-11 shooting in 29 minutes.

Also, the Knicks are inexplicably worse at MSG. They’re the only NBA team with a winning record on the road (14-8) and a losing record at home (11-13). It’s now a two-year trend of poorer performances at MSG, which Knicks players chalk up to the opponent being more motivated to playing at the World’s Most Famous Arena.

Porzingis was still booed in his first Garden appearance of the year, but they’re getting more subdued as time heals the wounds of the 2019 trade. Wednesday represented Porzingis’ best performance at MSG since the trade to the Mavericks, and just his second victory in seven attempts as an opponent against the Knicks.

He fouled out with 1:15 remaining and pointed at the jeering crowd with a wry smile.

The fear with Robinson is a torn UCL, which is common in the NBA and typically requires surgery with a recovery timeline of about a month. Robinson, who has already sustained a broken foot and hand in his career, logged just nine minutes Wednesday with zero points.

He was replaced in the rotation by Jericho Sims, who appeared in his first game since Jan. 6 and finished with two points and four rebounds in 21 minutes. Isaiah Hartenstein, who struggled Wednesday with four points on 2-of-6 shooting, is the other center.

Neither could deal well with Porzingis, who grabbed 11 rebounds (five offensive) in 33 minutes.