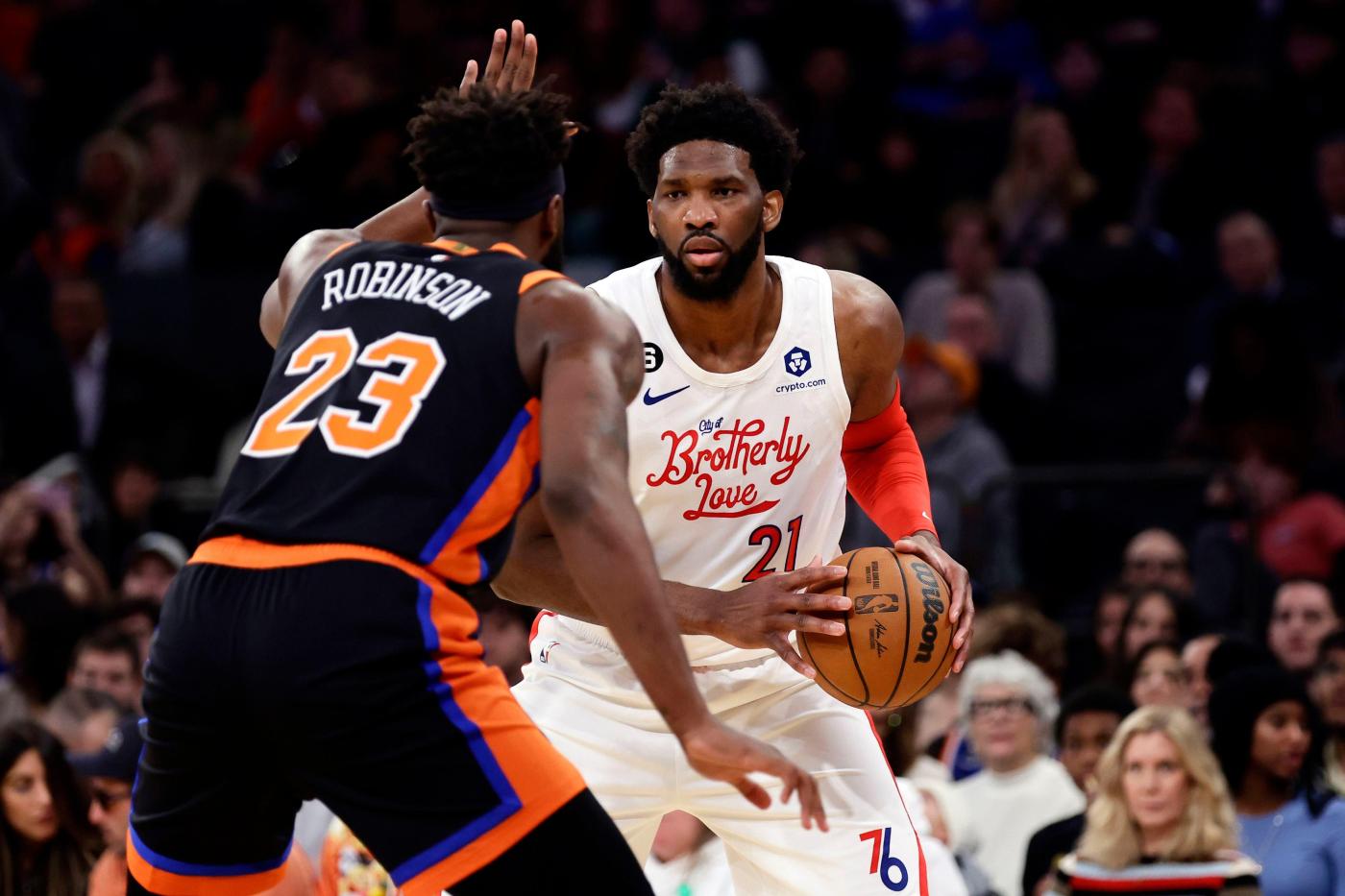 The holiday cheer went to the visitors.

The Knicks were outclassed and overrun at MSG by the Sixers in their Christmas matinee, playing the final quarter as if bloated by eggnog.

The Sixers, one of the league’s hottest teams, flaunted their two stars — Joel Embiid and James Harden — as the Knicks’ offense went colder than this weekend’s windchill in their 119-112 defeat.

In the midst of the Sixers’ 21-4 run in the second half, Embiid stood on the court and gestured at the crowd with his massive arms, inviting the vocal Sixers fans in attendance to cheer their assured victory.

The fanbase that once pelted Santa Claus with snowballs at an Eagles game got to enjoy X-Mas.

The Knicks (18-16) have lost three straight — all at home — which is dampening their eight-game winning streak from earlier this month. They were solid Sunday until the fourth quarter, when the Sixers (20-12) took their first lead of the game with about 10 minutes remaining and never looked back.

Embiid frequented the foul line and dropped 35 points in 34 minutes. Harden added 29 points with 13 assists and four steals in 43 minutes. The Sixers won their eighth straight.

Julius Randle was on pace for a historic game with 25 points in the first half, but only mustered four in the fourth quarter and finished with 35.

The Knicks had a winning formula in the first quarter — when they held a 37-25 lead — displaying remarkable efficiency and ball movement with 11 assists and zero turnovers. They also dominated on the boards wit the help of Mitchell Robinson. But momentum shifted in the second quarter, when Embiid began getting to the line and Sixers guard Shake Milton buried a buzzer-beating halfcourt heave to end the half.

Then the Knicks managed just 16 points in the fourth quarter.

“I thought the big thing was we fouled too much,” coach Tom Thibodeau told reporters after the game.

Despite the Knicks’ ugly record over the last 23 years, their appearance on Christmas is an NBA tradition rooted in the franchise’s long history and location. They’ve played on the holiday a league-record 55 times, with 13 against the Sixers.

And after Sunday, the Knicks are 23-32 on Christmas with just one victory in their last eight games.

After recording 23 points with 11 assists, Jalen Brunson left in the fourth quarter for the locker room with an apparent hip injury.

Thibodeau provided no update after the game.

MELO BACK AT MSG

Eleven years after he dropped 37 points for the Knicks on Christmas, Carmelo Anthony’s guest appearance at MSG prompted one of the biggest crowd pops of the day. The surefire Hall of Famer remains unsigned — though not officially retired — after playing last season with the Lakers.

The 38-year-old is ninth on the NBA’s all-time scoring list and only 307 points behind No. 8 Shaquille O’Neal.  His former agent, Leon Rose, now runs the Knicks front office.

On Sunday, Anthony sat in the front row next to Bernard King, who scored 60 points for the Knicks on Christmas of 1984.