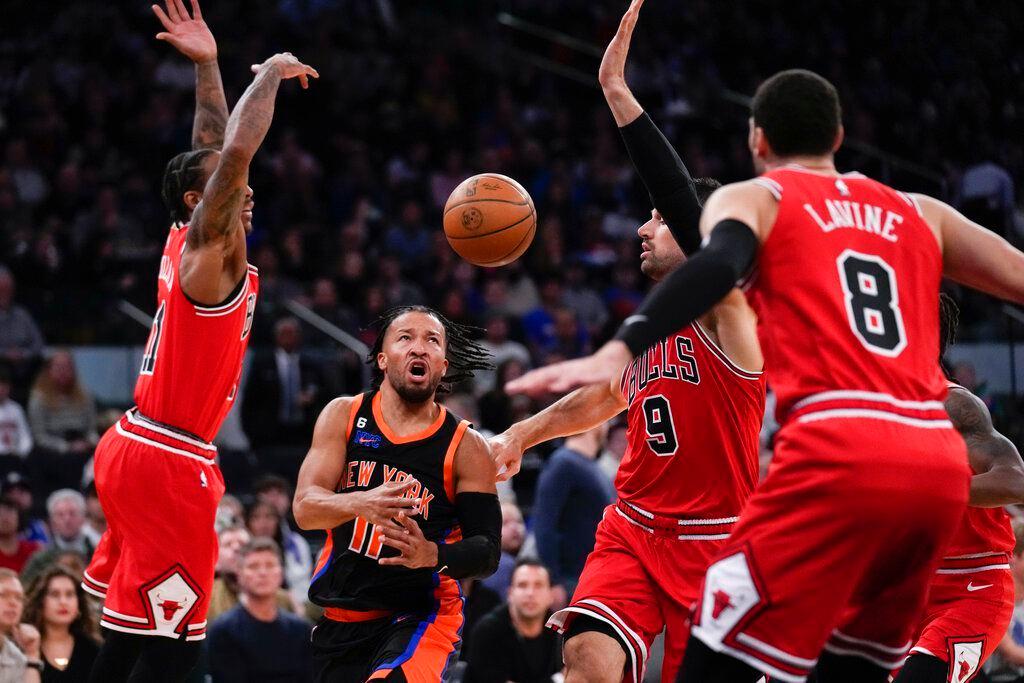 The Knicks gave themselves plenty to complain about on Festivus.

Their collapse on Seinfeld’s Dec. 23 holiday finished after four missed straight free throws in the final 66 seconds, allowing the Chicago Bulls to steal a 118-117 victory at the Garden and spoil RJ Barrett’s exquisite evening.

Instead, stepped out of the Garden to frigid temperatures and with a gut-wrenching defeat.

“It’s frustrating. Practice it all the time,” Brunson said about his foul shots. “I’m confident when I get to the line. Just missed it.

“I just got to flush it and continue to move on. And just be me and do my routine.”

As the temperature plummeted outside, Barrett’s shooting hand kept the Garden warm. The small forward finished with a season-

high 44 points — two shy of his career mark — and nailed a runner in the lane with 29 seconds left that would’ve been the winner had Brunson converted his ensuing foul shots.

“RJ being RJ. He was in attack mode for 48 minutes,” Brunson said. “He carried us. Especially when we needed it. We just got to close it out for him.”

Barrett’s highlight occurred with about six minutes remaining in the third quarter, when he drove past DeRozan and finished a one-handed jam over center Nikola Vucevic. The and-one conversion prompted chants from the sold-out crowd, the first of the season directed at Barrett.

“I was making shots, had it rolling tonight,” said Barrett, who shot 14-for-20, including 6-for-6 from beyond the arc.

But it was all wasted. The Knicks (18-15) have now dropped two straight after their eight-game winning streak, with a Christmas showdown against the surging Sixers on deck.

“I think we’re still together. I think we see it as opportunities to learn, opportunities to grow,” Barrett said. “Things can be great one second and bad the next, but it’s not even about that. It’s just, looking at what we did tonight, what we didn’t do enough of and cleaning that up.”

It was the third time in the last week that the Knicks faced the Bulls, a quirk in the NBA schedule. The Knicks won the first two games in Chicago behind Brunson, who attended high school in Illinois and savored the homecoming.

The script flipped at MSG but the Bulls, regardless of the impressive comeback, remain a mess. They were assembled at a high price for quick contention but have underwhelmed all season. Player confrontations and blow ups were reported from Chicago’s locker room, which added to the growing sense that either LaVine orDeRozan will ultimately be traded.

LaVine, 27, an All-Star the last two seasons, is considered a borderline franchise star but has never advanced out of the first round of the playoffs — and only made the playoffs once in his nine seasons.

The Knicks still have the draft capital to acquire LaVine after missing out on Donovan Mitchell, so there’s interest from team president Leon Rose in the Bulls’ direction.

At least on Festivus, the Bulls were good enough to take advantage of the Knicks’ mistakes.