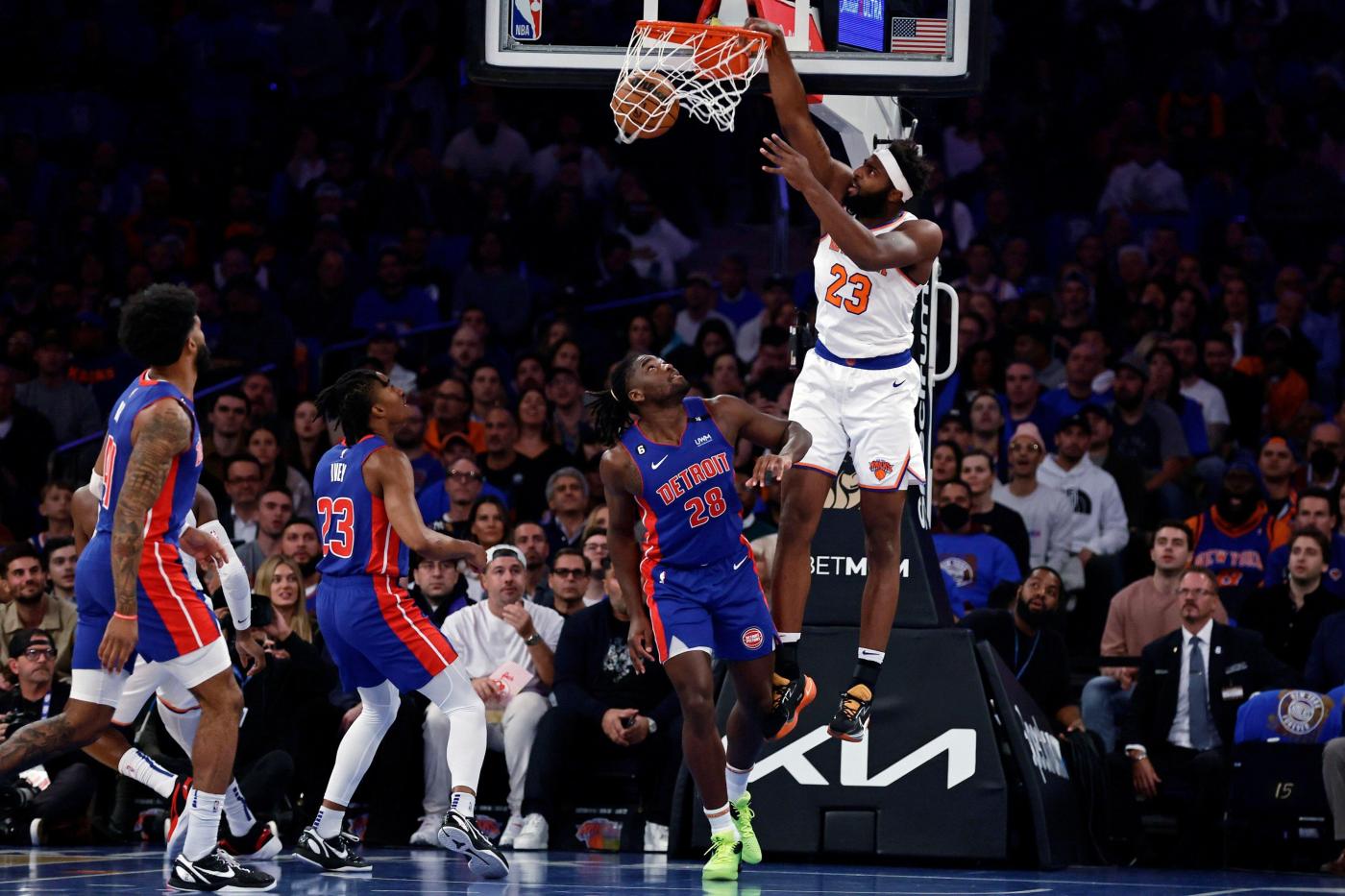 After those training camp declarations of picking up the pace to boost last season’s stagnant offense, Tom Thibodeau’s squad put it into practice with a 130-106 blowout over the Pistons in the home opener.

“I love it, man,” said Derrick Rose, a main driver of Friday night’s steamroller over the Pistons. “I felt like the pace that we played with that’s how we can normally play. That’s how we should play. We just need games under our belt. I feel like we could be a dangerous squad if we get things clicking.”

The Knicks (1-1) shot 53% with the scoring spread evenly and the ball in perpetual motion, especially when the reserves were on the court. The Pistons could’ve warmed up the bus in the second quarter.

The beatdown commenced after the insertion of the Knicks reserves, who entered with a two-point lead in the first quarter and turned it into 22.

Rose was the catalyst and notably efficient at +23 in 16 minutes. He picked up the pace and teammates followed, as Toppin ignited the fans with his transition finishing. Quickley dropped a team-high 20 points.

“Rick put on an emphasis on ball movement this morning. …Once he said that, everybody knew how to approach this game,” Rose said.

“We need that from our bench,” Thibodeau added. “I thought they played well together. They played well as a group. And that was the most pleasing thing.”

Jalen Brunson, who is Rick’s son, finished with 17 points and six assists in his Knicks home debut, but the highlight was diving for a loose ball into the crowd.

“I think those hustle plays do nothing but unite and inspire the team,” Thibodeau said. “When we got our defense going, got turnovers, and we got into the open floor it snowballs. And then everyone’s energized off of that.”

The Knicks (1-1) were coming off Wednesday’s opening night loss to the Grizzlies, an overtime affair that fell unfavorably to New York because of Ja Morant’s athletic brilliance.

But the Grizzlies are a borderline contender and the Pistons are projected for basement-dwelling again. The Knicks probably fall somewhere in between, and they emphatically handled business against an inferior opponent Friday night.

The sold-out crowd was clearly eager for the opener, giving huge pops to Toppin and Barrett during the pregame introductions. The Garden burst into joy after Evan Fournier hit the game-opening 3-pointer.

The only letdown to the experience was the lack of drama on the scoreboard.

THE OTHER NEW KNICKS

The Knicks City Dancers also underwent a transformation in the offseason.

Rebranded as K.C.D. and cut to only eight dancers, their performances resembled music videos with a higher level of production and sleek outfits.