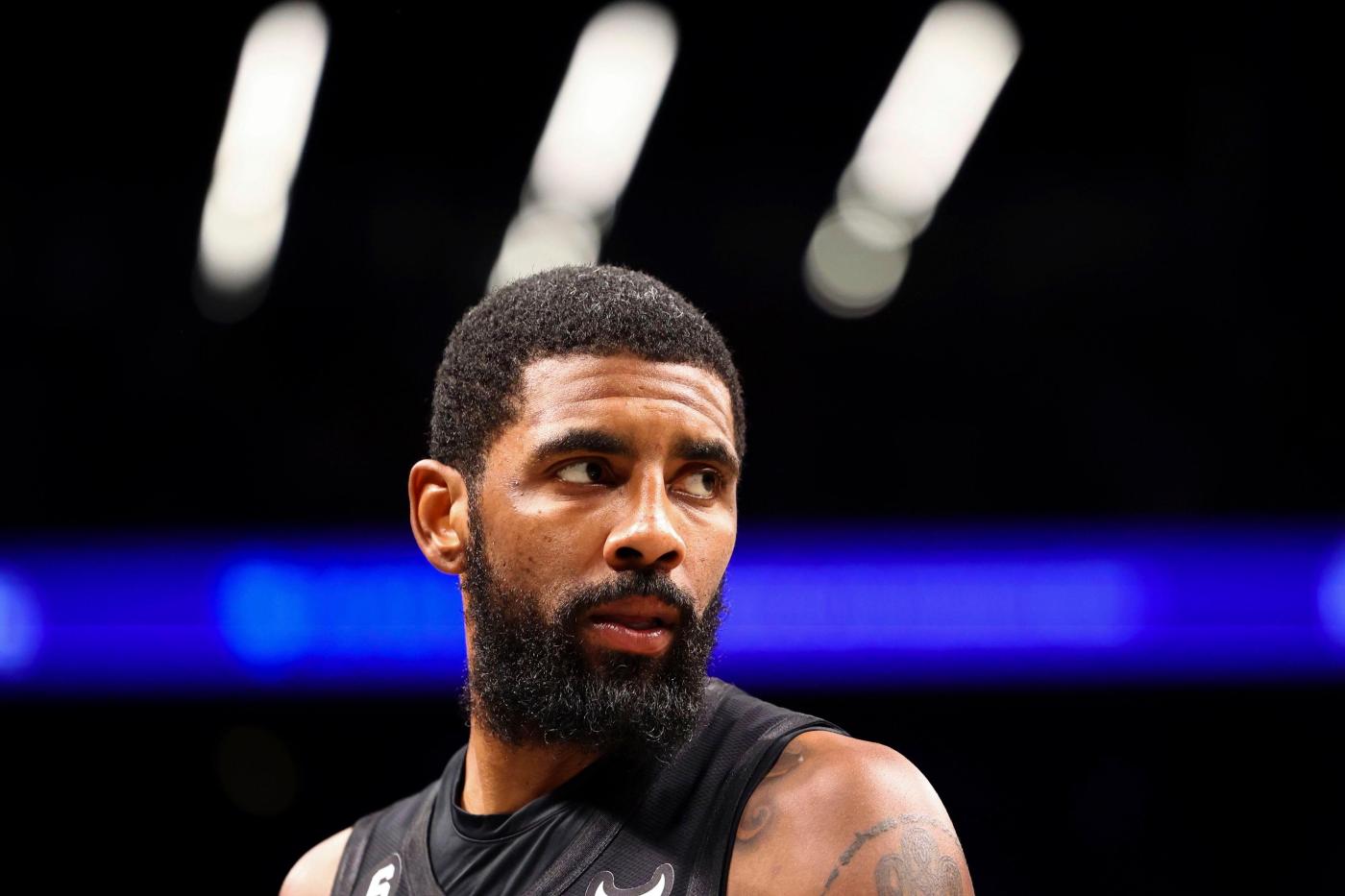 As Nets general manager Sean Marks told reporters he has yet to speak directly to star guard Kyrie Irving — only Irving’s representation — following the announcement of his minimum five-game suspension, a small group of Black Hebrew Israelites protested the suspension outside Barclays Center.

The group, about three dozen deep, gathered in front of the Atlantic Ave-Barclays Center train station exit closest to the front of the arena and one protestor with a microphone addressed both pedestrians casually walking by and fans entering the building for Wednesday’s matchup between the Nets and Knicks.

The Nets deemed Irving “unfit to be associated with” the organization and suspended him for five games for failing to condemn antisemitism after posting the link to a controversial movie — “Hebrews to Negroes: Wake Up Black America” — on both his Instagram and Twitter accounts in late October.

The group of protestors also handed out pamphlets titled “The Truth About Antisemitism” to those who passed by or into the arena. The pamphlet perpetuated many of the falsehoods contained in the film Irving shared, including the idea that Jewish people are “the synagogue of Satan.”

Irving never issued an official apology — even saying “I can not be antisemitic if I know where I come from” — until after the Nets announced his suspension. Marks said there has been no development regarding Irving’s return to the court, even though the star guard met with NBA commissioner Adam Silver on Tuesday.

“On the Kyrie front, when we have news to share and updates, we will do so at the appropriate time,” Silver said. “As of now, there’s nothing to share.”

Newly promoted head coach Jacque Vaughn also said he hadn’t spoken to Irving about the suspension as an assistant.

The Nets delivered Irving’s suspension on Nov. 3 and Wednesday’s matchup against the Knicks marks the fourth game he has missed. Saturday’s matchup in Los Angeles against the Clippers will mark the fifth game, and the organization will have to provide some sort of update after that matchup.

The Nets reportedly outlined six benchmarks Irving must meet to be reinstated, including meeting with both the Anti-Defamation League and Brooklyn’s Jewish leadership, completing antisemitic training and hate speech training, condemning the movie, donating $500,000 to anti-hate causes and meeting with Nets owner Joe Tsai to demonstrate an understanding of the harm he caused.

“I don’t believe Kyrie Irving is antisemitic. I don’t think people in our governing bodies think he’s antisemitic. He made a mistake,” said Brown, Irving’s former Boston Celtics teammate. “I’m expecting the NBPA to appeal the suspension from Brooklyn. The terms for his return, they seem like a lot, and a lot of players expressed discomfort with the terms. He made a mistake. He posted something. There was no distinction.”

Irving averaged 26.9 points, five assists and five rebounds through the first eight games of the regular season. The Nets went 2-6 through in those games and entered Wednesday’s matchup against the Knicks 2-1 in his absence.