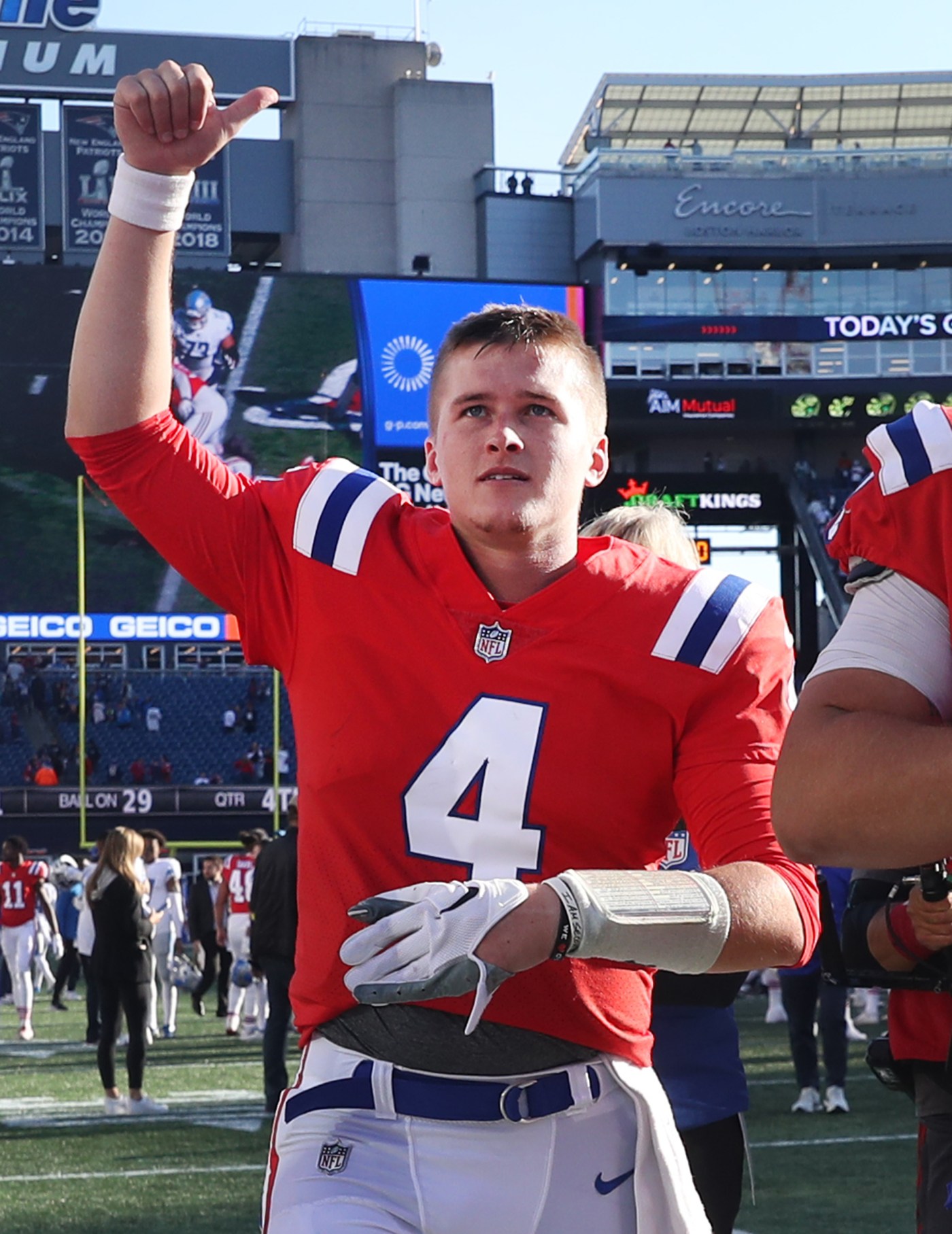 FOXBORO — Let’s just say the Detroit Lions found out what it feels like to get Zapped.

Their former head coach, Matt Patricia, now the Patriots offensive play-caller amongst other things, managed to embarrass them with a rookie third-string quarterback at the helm.

That certainly won’t go over well in the Motor City.

As for Patricia’s young backup quarterback, the legend of Bailey Zappe just continues to grow by leaps and bounds in New England and beyond.

After Sunday’s performance, Zappe Fever has gone up at least a notch. It’s quite possible the love affair with the Patriots fourth-round pick has hit the Zappe Mania stage following the 29-0 win.

Save for going 0-for-4 in the red zone, with Nick Folk needing to kick five field goals in the game, Zappe did just about everything right.

It’s really hard not to be impressed with the kid, who made his first NFL start. Granted, the Lions have the worst defense in the league by any metric, but that shouldn’t totally diminish Zappe’s effort.

The kid delivered a much-needed win, and did everything he was asked, and more.

Like his relief appearance against Green Bay last week, Zappe was heavily managed by the coaches, and benefited from having an elite running attack led by Rhamondre Stevenson, who gained a career high 161 yards on 25 carries.

The offensive line also had his back, while the defense played lights out, shutting down the top-ranked offense in the league.

But it would be remiss not to give Zappe props for this performance, even against a woeful defense.

Once again, his poise and calm in the pocket stood out. So did his decision-making and pocket awareness, knowing when to step up and deliver throws, or get on the move before dishing it off.

He wasn’t asked to do too much, but made all the right moves when Patricia put the ball in his hands, whether taking snaps under center, or operating from the shotgun.

Fans were chanting, “Zappe, Zappe, Zappe” at different points throughout the game, but were especially vocal in the closing minute. They were appreciative of his efforts, as Zappe completed 17 of 21 passes for 161 yards with a touchdown pass. He also had an interception on his stat sheet, but the pass should have been caught by Nelson Agholor.

In any case, Zappe showed improvement from his debut last week, coming on in relief, and with both Mac Jones (high ankle sprain) and Brian Hoyer (concussion) unavailable, the Patriots are thrilled to see this kid deliver in the manner he has to help the team move to 2-3 on the season.

Patriots head coach Bill Belichick also cited Zappe’s decision-making, accuracy and poise. Perhaps most impressive was Belichick saying the rookie saw things the same way as he did from the sidelines as the plays were developing.

“He was confident out there. He does a good job. He does a good job of seeing the game and can come off and identify and articulate what he saw, what happened. That’s usually right,” said Belichick. “What he saw is usually what I saw or maybe when you look at the film, maybe there’s something that’s a little gray in there that his explanation is actually good. It was the way he saw it.

“Maybe he might not have done the right thing, but he saw the game. That goes all the way back to preseason. He played a lot in preseason. I think those snaps were good for him. He learned a lot.”

After the game, Zappe said he’s just trying to make the most of his opportunity. He’s worked and studied hard. He also credited his offensive linemen for giving him time to throw, and also open up holes for then run game.

“They played amazing today. To be honest with you, all five of those guys — actually six, including Marcus Cannon, were the MVPs of today,” said Zappe. “We ran the ball well … did play-action well, kept me clean in the pocket. We were able to go through second, third reads, get to your check-down. They played really well today. To be able to have those guys up front is amazing to have that.”

Receiver Jakobi Meyers returned after missing the previous two games, and his addition also made a huge difference. Meyers has a knack for getting open, and Zappe connected with him constantly.

Meyers had a game-high seven catches for 111 yards and a touchdown. Tight end Hunter Henry’s presence was finally felt, as he caught four passes for 54 yards. All of them resulted in first downs.

With the run game so effective, Patricia effectively utilized play-action much more in this game. Zappe’s touchdown pass to Meyers came on play-action, with the receiver wide open on the right side.

Meyers patted Zappe on the back, but also credited the coaches for having him prepared, and also calling a good game. So yes, Patricia continues to improve in that area.

“Shout-out to the coaches for just having a good game plan, calling the right plays and for him to go out there and execute it for us,” said Meyers.

Patricia was congratulated by many of the Patriots players and members of the coaching staff in the closing minutes. Patricia also had many Lions players and coaches do the same on the field following the contest.

But fans weren’t chanting Patricia’s name. That distinction belonged to the quarterback, as fans shouted Zappe in the appropriate spot when the song “Don’t Worry Be Happy” blared over the speakers.

Even with all the adulation showered on Zappe, Meyers said there was no fear of the kid getting a big head over his newfound fame and popularly.

Said Meyers: “He’s one of the coolest dudes in the locker room. He’s got a real southern chill to him. He’s the same guy every day. So I don’t expect him to be no different.”