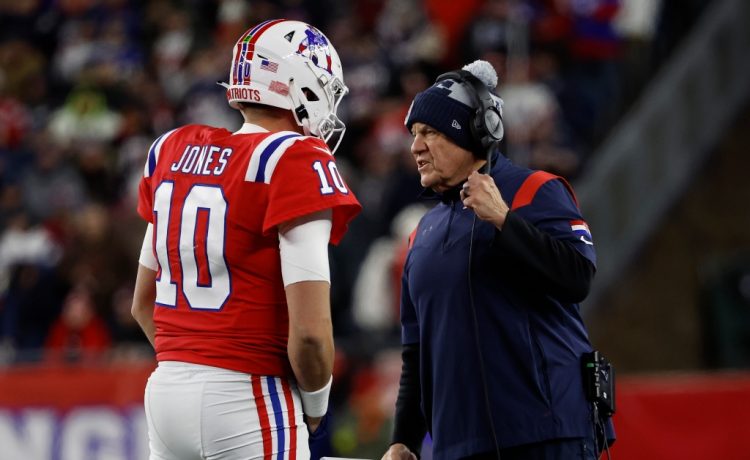 What else is there to say about Sunday?

The case of the Patriots’ failed 2022 season was solved well before their loss at Buffalo filed it away for good. The culprits? Offensive coaching and special teams.

The Bills returned two kickoffs for touchdowns in a 35-23 win, putting the Patriots on the wrong end of half of the kick return touchdowns scored in the NFL this season. The Pats finished with the league’s worst special teams, per Football Outsiders’ opponent-and-situation-adjusted metric DVOA, and their worst of the Bill Belichick era. After the game, Belichick claimed the finale came down to four plays: those returns and Josh Allen’s rocket-launched touchdown passes in the second half.

Except only someone who hasn’t watched the Bills and Patriots play seven times since Tom Brady left, a stretch when Buffalo went 6-1, would believe that. The Bills boast the better quarterback, the deeper roster and more reliable coaching staff, all of which carried them to victory Sunday. At least over the weekend, the Pats’ offensive staff finally weaponized play-action and diversified its red-zone play-calling. The wrinkles were real, and they were spectacular.

But the pain of the Patriots’ 2022 season cuts deep. Not because the team’s final record was surprising, but because of the culprits. The Patriots’ edge under Belichick is supposed to be coaching and creating unseen advantages, like on special teams. Yet this season, those areas were their obvious undoing.

Curiously, Belichick’s comments Sunday mirrored those he made after the Pats’ season-opening loss at Miami. Hours after the 20-7 defeat, he said it boiled down to two plays: a second-quarter strip-sack of Mac Jones, and Tua Tagovailoa’s touchdown pass before halftime. That was it.

The Patriots were “competitive from a yardage standpoint,” said the coach who once famously declared “stats are for losers.”  Four months later, finished at 8-9, Belichick stuck to his feel-good guns to close a season that should be remembered for him moving the goal posts as much as Mac Jones’ on-field fits or late-season fumbles costing the Patriots against the Raiders and Bengals.

So instead of breaking down why Sunday’s season finale hinged on more than four plays, and dragging the goal posts back to their proper place, what follows is a film review of the entire season, plus the Patriots’ season leaders in key stats.

Notes: This was, to say the bare minimum, a trying season for Jones.

First, the Patriots’ newly aggressive downfield passing attack vaulted him into the league lead for interceptions through Week 3. Then, Jones missed four games with a high ankle sprain, and his head coach declined to name him the starter for the rest of the season. At last, Jones’ solved his pick problem — throwing one interception from Halloween through New Year’s Day — but was dogged by an inconsistent run game, occasional mechanical breakdowns and an overly conservative and simplistic system.

None of this is to excuse Jones from all blame, especially his body language in November and December. But the parts of the Patriots’ passing game most firmly within his control were the most consistent from last year to this season. His accuracy (at 74.7% adjusted completion percentage in 2021 and 74.3% in 2022), downfield aggression (8.3 yards average depth of target) in 2021 and 8.2 aDOT in 2022) and ball security (2.5% turnover-worthy play percentage in 2021 and 2.7% in 2022) all remained steady. He took more sacks, but scrambled more and fumbled less.

Will Mac Jones be the Patriots’ starting quarterback in 2023? Bill Belichick answers

The bottom line is we know the roughly same about Jones as we did this time last year, a damning lack of development that says much more his environment than about him. He is a pocket-bound passer with above average accuracy and unthreatening arm talent. He processes quickly and operates best over the middle of the field. He wilted under pressure in Year 2, though passing numbers under pressure are not predictive season to season.

What does that mean for Year 3? That, like much of the Patriots’ immediate future, will be up to coaching.

Another career year. Judon clinched his fourth straight Pro Bowl honor by nabbing 15.5 sacks, plus 13 other QB hits and 23 hurries. He was a monster.

The breakout star of the Patriots’ season. Stevenson wore down over the final three weeks, but single-handedly carried the team’s rushing attack and caught more passes than anyone on the team.

Far and away the Patriots’ best offensive lineman this year, Onwenu didn’t allow a sack until Week 17. He could even challenge Stevenson for the team’s best offensive player. He was that good.

Wynn was a debacle. He had a streak of four straight games with a penalty and a sack. He was benched multiple times and eventually shelved on IR. It would be a shock to see him back in New England.

Another impending free agent, Agholor’s numbers fell even further this season. He finished without a catch in the team’s last three games and all but fell out of the Pats’ receiver rotation.

How many of his 27 catches do you remember?

Poor awareness, subpar route-running and a lack of consistency forged the worst season of Smith’s career. Because of the guaranteed money in his contract, Smith will be back next season, but the team surely hopes he’ll improve on those 27 grabs for 245 yards and zero touchdowns.

Jake Bailey and Michael Palardy were the NFL’s two worst punters this season, per certain metrics. Bailey capped the worst statistical year of his career with a suspension. And without him, the Pats’ kickoff team suffered, too.