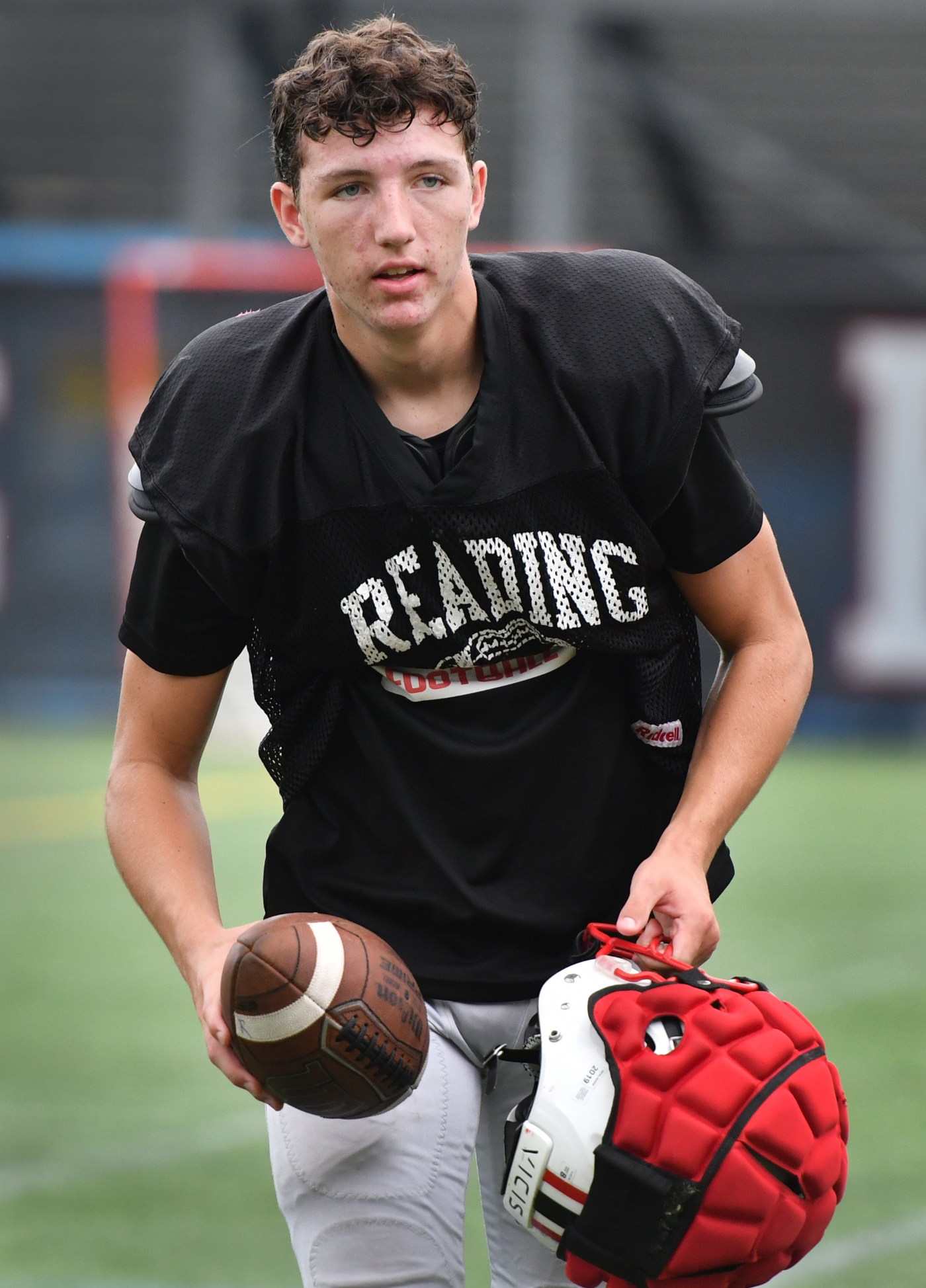 Most years, you can have a healthy debate over who belongs as the preseason No. 1 team in the Boston Herald’s Sweet 16.

This year does not appear to be one of them.

The Boys on Baker Street, more commonly known as Catholic Memorial, occupy the top spot in our 30th annual preseason Eastern Massachusetts Sweet 16. The Knights have an impressive nucleus back from a squad which rolled over the competition on their way to the school’s first Super Bowl title since 1978.

The road to repeat won’t necessarily be an easy one as Catholic Memorial must first navigate a top-heavy Catholic Conference with No. 2 Xaverian and No. 4 St. John’s Prep on the schedule. Once they get to the Division 2 tournament, they must deal with a slew of very good teams starting with the Hockomock League trio of No. 5 Mansfield, No. 6 Milford and No. 9 King Philip, as well as traditional contenders Reading (No. 7), Marshfield (No. 15) and Natick (No. 16).

Central Catholic lands in the three spot. The Div. 1 finalists of a year ago, the Raiders certainly have some holes to fill as graduation hit them in some spots as it does for virtually every team.

2. XAVERIAN (8-3): Harvard-bound Jon Mould, Andrew Dufault and Matthew DeFeo are back in the trenches, while running backs Michael Oates and Cole Jette, along with wide receivers Jonathan Monteiro and Charlie Comella, return. Belmont Hill transfer Henry Hasselbeck will step in at quarterback. On defense, Mould and DeFeo return up front, Jeffrey Prophere and Jette are the linebackers and Anthony Busa, Monteiro and Comella key a solid secondary.

3. CENTRAL CATHOLIC (11-2): Blake Hebert takes over at quarterback for standout Ayden Pereira and he’ll rely on running backs Matthias Latham, Sean Mercuri and Marquis Bridgewater, wide receiver Ty Cannistraro and Notre Dame-bound Preston Zinter, while Jaden Wiggins is the most experienced linemen on both sides of the ball. Latham, Cannistraro and Bridgewater are back in the secondary, while Marcus Rivera, Zinter and Mercuri are the linebackers. Central Catholic has one of the better kickers in Mikey Ryan.

4. ST. JOHN’S PREP (8-4): The big news was the return of standout defensive back Joenel Aguero after spending two years at IMG Academy. The Georgia-bound Aguero will key a defense which includes linemen Mason McSweeney and Mikey Nabbout, linebacker Jack Fillion and defensive back Lucas Verrier. Pius Ejindu and Cristhian Difo are back on the offensive line, as well as running back Carson Browne, and star receivers Jesse Ofurie (Rutgers commit) and Stefon Patrick.

5. MANSFIELD (7-4): Connor Zukowski returns at quarterback along with wide receivers Trevor Foley and C.J. Bell, tight end Ryan DiGirolamo, running backs Rocco Scarpelli and Drew Sacco, and linemen Jephte Jean and Colton Johnson. Many of those same names are on defense as Jean is on the defensive line, Foley, DiGirolamo and Bell are in the secondary, and Caden Colby and Scarpelli are the linebackers.

6. MILFORD (9-3): The Scarlet Hawks are solid in the trenches. Two-way linemen Keith Lee and Tyler Potter are back along with Lawrence Academy transfer Ryan O’Connor. Evan Cornelius is back under center and he has a pair of solid targets in Isaiah Pantalone and Damien Carter, while Romeo Holland is back at running back and linebacker. The kicking game is in the capable hands of Nick Araujo.

7. READING (10-1): Two-time All-Scholastic quarterback James Murphy, who threw for 2,415 yards and 31 touchdowns last year, returns. He’ll have a solid complement of receivers back in Ryan Strout, Jesse Doherty, Aidan Bekkenhuis and Alex DiNapoli. Collin Donahue, Ryan Mulvey and Eamon Centrella will lead the way in the trenches. On defense, Bekkenhuis, DiNapoli and Jack Daugherty return in the secondary, Giacomo Iapicca is back at linebacker, while Donahue and Centrella are back at tackles.

8. ANDOVER (5-7): All-Scholastic running back Lincoln Beal and four-year starting quarterback Scotty Brown are back as well as Merrimack Valley Conference All-Stars Brian McSweeney at linebacker and tight end as well as Jason Osborne as a two-way linemen. Bret Mondejar is back at wide receiver and defensive back, while Danny Hunter is another solid lineman. Andrew Wetterwald gives the Golden Warriors a reliable kicker.

9. KING PHILIP (9-3): The Div. 2 finalists return one of the most productive backs around in Ryan Gately. Also returning for the Warriors are fullback/linebacker William Astorino, wide receiver/defensive back Thomas Brewster, running back/defensive back Nathan Kearney, and two-way linemen Sean King and Christopher Sesay.

10. MILTON (8-3): Owen McHugh gets his chance to run the offense and he’ll have plenty of targets at his disposal led by Luke Sammon, Shane Olsen, Michael Fulton and Dillon Mackenzie, while Jack Finnegan will be the featured back. Drew Cakouros is the headliner in the trenches. On defense, KJ Beckett, Henry Fallon and Liam McLoughline return at linebacker, while the secondary is sound with McHugh and Finnegan back there.

12. EVERETT (10-1) – You know the program is in good shape when you go 10-1 and some label it a disappointing season. Many starters graduated from that squad, leaving head coach Rob DiLoreto to rely on quarterback Karmarri Ellerbe and offensive lineman Nick Raymond, as well as wide receivers Christian Zamor and Giacobbe Ward.

13. MARBLEHEAD (12-0): The Magicians finally broke through, winning the school’s first Div. 3 state championship. One of the leaders of that team, Connor Cronin, is back and will play a variety of roles again, ranging from running back to wide receiver to defensive back. He is one of five captains along with WR/DB Zander Danforth, OL/LB Christian Pacheco, Sam Annese and Nick Whitaker. Also returning are two-way lineman Jack Anashansley, WR/DB Aven Dembow, TE/LB Shane Keough and RB/DB Andy Palmer. Miles O’Neil gets his chance to take over for Josh Robertson at quarterback.

16. NATICK (9-2) – The front seven on defense should be solid as LB Teddy Ferrucci, Henry O’Connor and Brady Holcomb return with DL Tucker Vician and Kenan Kelly, and DB Drew Waldron. The offensive will have a new look as OG Brett Heyde, TE Jack McCarthy and C Jack Hubbard are the only returnees.