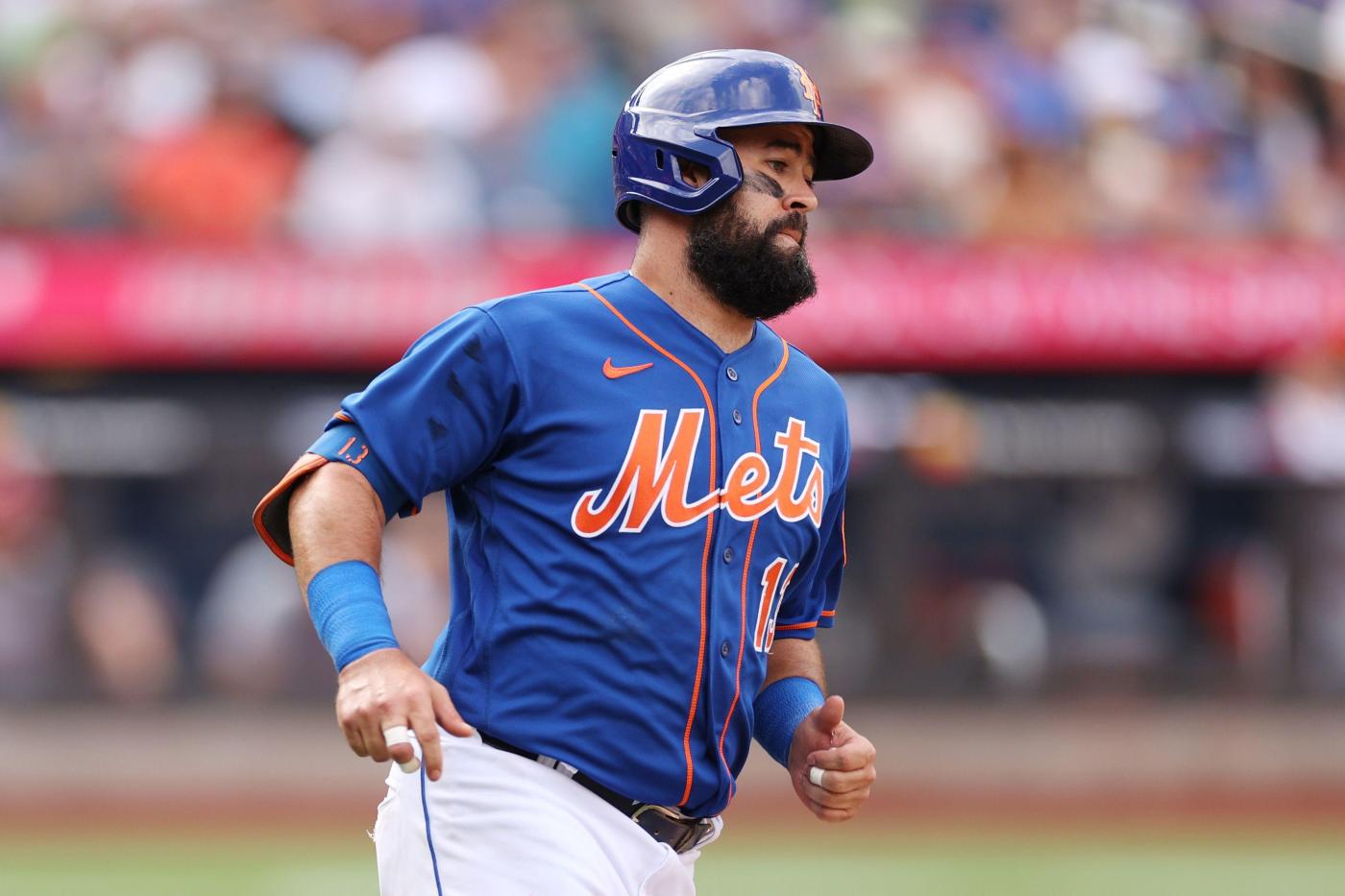 ATLANTA — The Mets will likely play their next month of games without an essential piece of their infield.

Luis Guillorme, who left Sunday’s game with groin tightness, has officially been diagnosed with a moderate strain in that left groin. The Mets gave a four-to-six week estimate for his return. Deven Marrero, a 31-year-old right-handed hitter with 173 big-league games under his belt, was called up from Triple-A Syracuse to take Guillorme’s spot on the roster. Marrero has played each infield position during his professional career.

“I mean, the Phillies just played without [Kyle] Schwarber, the Yankees played without [Giancarlo] Stanton,” said Buck Showalter, trying to make the point that injuries eventually come for everybody. “Yeah, he’s valuable, but so is Jacob deGrom. [Brandon] Nimmo’s been down. [Jeff] McNeil’s been down. It is what it is. But, you know, he’s done a lot of things for us.”

Guillorme has played in 86 games for the Mets this season, putting up a career year on both sides of the ball. His .283/.355/.357 slash line is nice, and an improvement from his career figures, but his ability to move around the diamond supplied an element that nobody else on the Mets’ active roster could bring. As Eduardo Escobar has struggled, Guillorme has plugged and played at third base, starting there in nine of the team’s first 14 games in August. He’s gotten 49 starts at second base, letting Showalter move Jeff McNeil around. He’s also the only person not named Francisco Lindor to play shortstop for the Mets this year, making three spot starts on the rare occasion that iron man Lindor took a day off.

Several eager minds began wondering if Brett Baty, the team’s top infield prospect, would be called up from Triple-A to replace Guillorme for the time being. Showalter shot that idea down right away when asked about it, making it seem as though the front office did not seriously consider that idea whatsoever.

“Not at this point, no,” Showalter said. He said the same thing about Mark Vientos.

“We’ve been talking about a lot of different things,” Showalter said. “We took everything under consideration.”

The timing is a bit unfortunate for the Mets, who were likely hoping they could give Escobar some more time to heal his own issue. Escobar was pulled from Friday’s game with oblique tightness, said on Sunday that he could pretty much do everything besides hit right-handed, then had to be inserted into Sunday’s game (and hit right-handed) when Guillorme strained his groin. Escobar batted eighth for the Mets in Atlanta on Monday, playing third base and hitting lefty against a right-handed starter.

“We’ll see where the next few days take us,” Showalter laid out. “Escobar went out today at about 1:30, 2:00 and did a lot of things. He feels a lot better. That was good to see. That was a real positive today.”

Showalter wouldn’t say whether Escobar is fully comfortable hitting from both sides yet, as he didn’t want to reveal any insider secrets to Atlanta.

The Mets are also without Tomas Nido, their primary catcher this season. He is dealing with something the club classified as a non-injury illness and did not have a locker in the visitor’s clubhouse at Truist Park. Michael Perez, the catcher who came over from Pittsburgh in the Daniel Vogelbach deal, was promoted to the active roster. Perez has been on the taxi squad but has not played a game for the Mets yet, just five games with their Triple-A affiliate.

TAKE THAT FOR DATA

Pete Alonso brought the National League lead in RBI with him to Atlanta. The Mets’ first baseman had 97 runs batted in entering play on Monday, eight ahead of Paul Goldschmidt for the NL lead and just three back of Aaron Judge for the major league lead.

The RBI is an inherently team-dependent stat, but there is something to be said for a hitter that consistently produces them. After Saturday’s game, Alonso was asked if he still places a lot of value in the RBI, which the analytics crowd has poo-pooed in recent years due to its nature as a counting stat that usually requires a teammate’s help.

“Oh, for sure,” Alonso replied. “It’s a run scoring competition, not a hit competition.”

He didn’t quite shove the baseball nerds into a locker, but he did have some parting words for the spreadsheet jockeys.

“People who think that, I think they don’t necessarily understand baseball.”

Trevor Williams, whom Showalter referred to as a utility pitcher, has been inhaling innings.

“Under the radar, Trevor’s been a very valuable guy. I’ve been saying it kind of all along,” Showalter said of his long-haired reliever with the 3.02 ERA. “In that type of role — spot start, long relief, and really done some things short for us too in a time of need — that’s remarkable. That’s not an easy thing to do. That’s hard.”

Williams’ worst day at the office this season was a spot start against the Texas Rangers when he coughed up five earned runs in 3.2 innings. Since then, he’s put together a 20-inning scoreless streak, which includes relief outings of two, three and four innings, as well as a seven-inning start against the Marlins.

“Teams need to have a guy like him to be successful,” Showalter said.