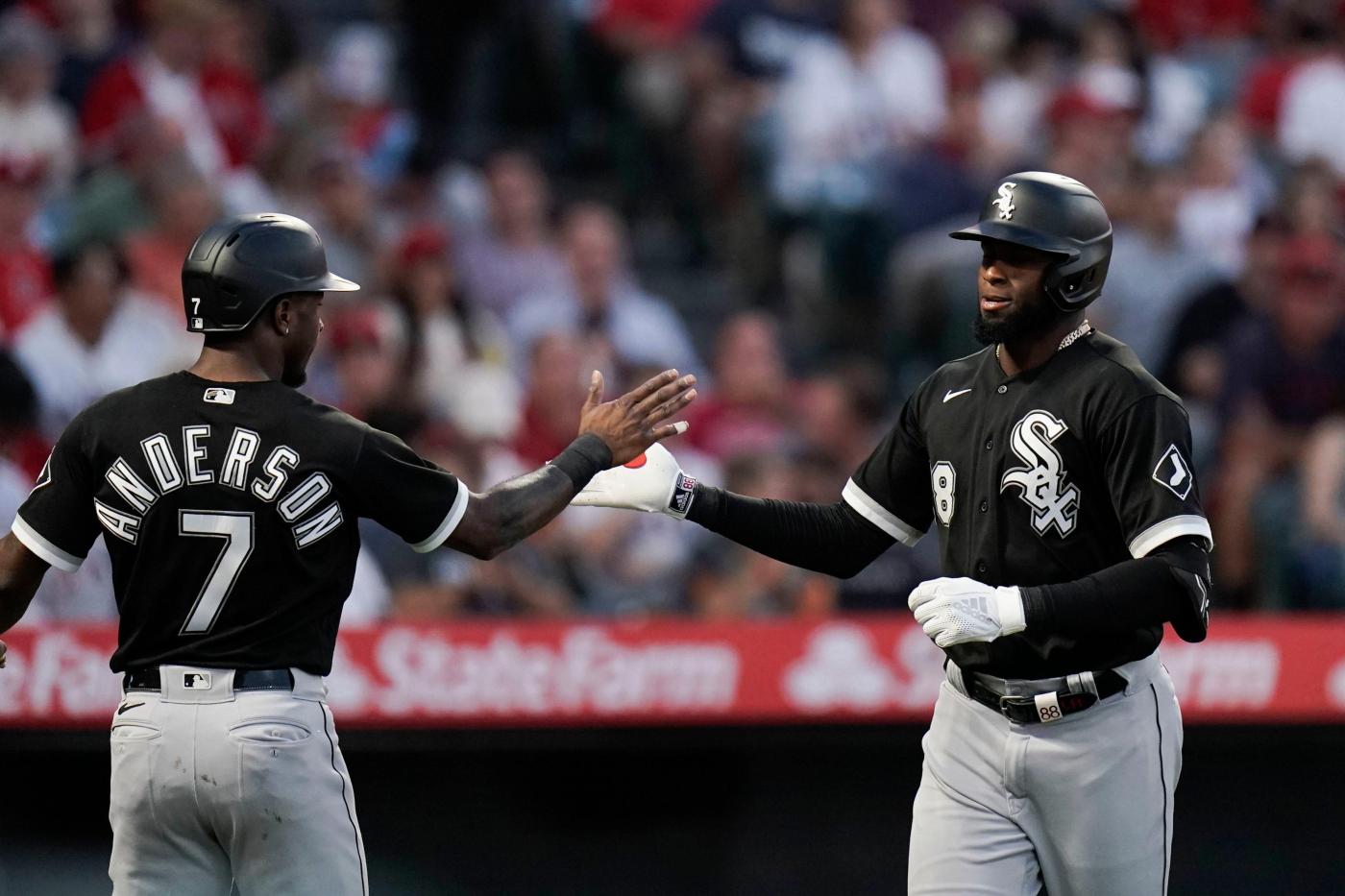 It was the definition of a no-doubter.

The blast gave the Sox the lead on the way to an 11-4 victory over the Los Angeles Angels in front of 23,979 at Angel Stadium.

“It wasn’t as important for the distance, it was important because of the moment of the game,” Robert said through an interpreter.

The Sox scored five runs in the fifth and five more in the seventh. They finished with 17 hits, three by Robert.

He hit the second two-run homer in the fifth after Josh Harrison’s shot against Angels starter Chase Silseth tied the game at 3.

“Got into a good count, 3-1, saw the ball pretty well and just got a pitch (and) didn’t miss it,” Harrison said. “Been feeling pretty good at the plate, getting my rhythm and timing. Putting good swings on good pitches.”

Ortega entered and allowed a single to Tim Anderson, the fourth straight Sox hit in the inning. Two batters later, Robert smashed the first pitch he saw from Ortega over the center-field wall, putting the Sox ahead 5-3.

The Sox overcame three Angels homers in the third inning.

“We’re down three and everybody said we’re not doing this to (Sox starter) Johnny (Cueto) again,” Sox manager Tony La Russa said. “He gives it up early and he shuts them down. We had to do something. Our guys were relentless. That’s baseball. Shows what we can do.”

After Andrew Velazquez hit a solo home run with one out in the third against Cueto, Mike Trout and Shohei Ohtani went back-to-back with two outs.

Cueto (2-4) bounced back, allowing one hit and one walk in his final three innings. He exited with three runs allowed on seven hits with five strikeouts and one walk in six innings.

“Those homers just got me going,” Cueto said through an interpreter. “I was able to execute and that was what I needed to get it going.”

Cueto was coming off of his shortest start of the season, allowing three runs on seven hits in 5⅓ innings on June 24 against the Baltimore Orioles at Guaranteed Rate Field.

The right-hander continues to be a solid addition, going at least six innings for the seventh time in eight starts.

The Sox also saw some positives offensively, as seven hitters had at least two hits.

That included third baseman Yoán Moncada, who singled, doubled and drove in two in his return from the injured list. Anderson and José Abreu joined Robert with three hits.

Harrison had two hits, a walk and three RBIs.

“A lot of clutch at-bats, with a walk, before Timmy got up there,” La Russa said of Harrison, the No. 9 hitter. “He’s looking like himself and that’s a boost for us because he has winning all over him.”

Harrison added: “(We) kept the line moving, one through nine (in the order), tough (at-bats). That’s typically a recipe for success.”

It was also a sign of the team’s potential at the plate.

“The game of baseball is a very difficult one,” Robert said. “And we always try to do our best every day and to have a day like today is good for everybody. That doesn’t mean we’ll have a day like that tomorrow, but we’re going to try.”