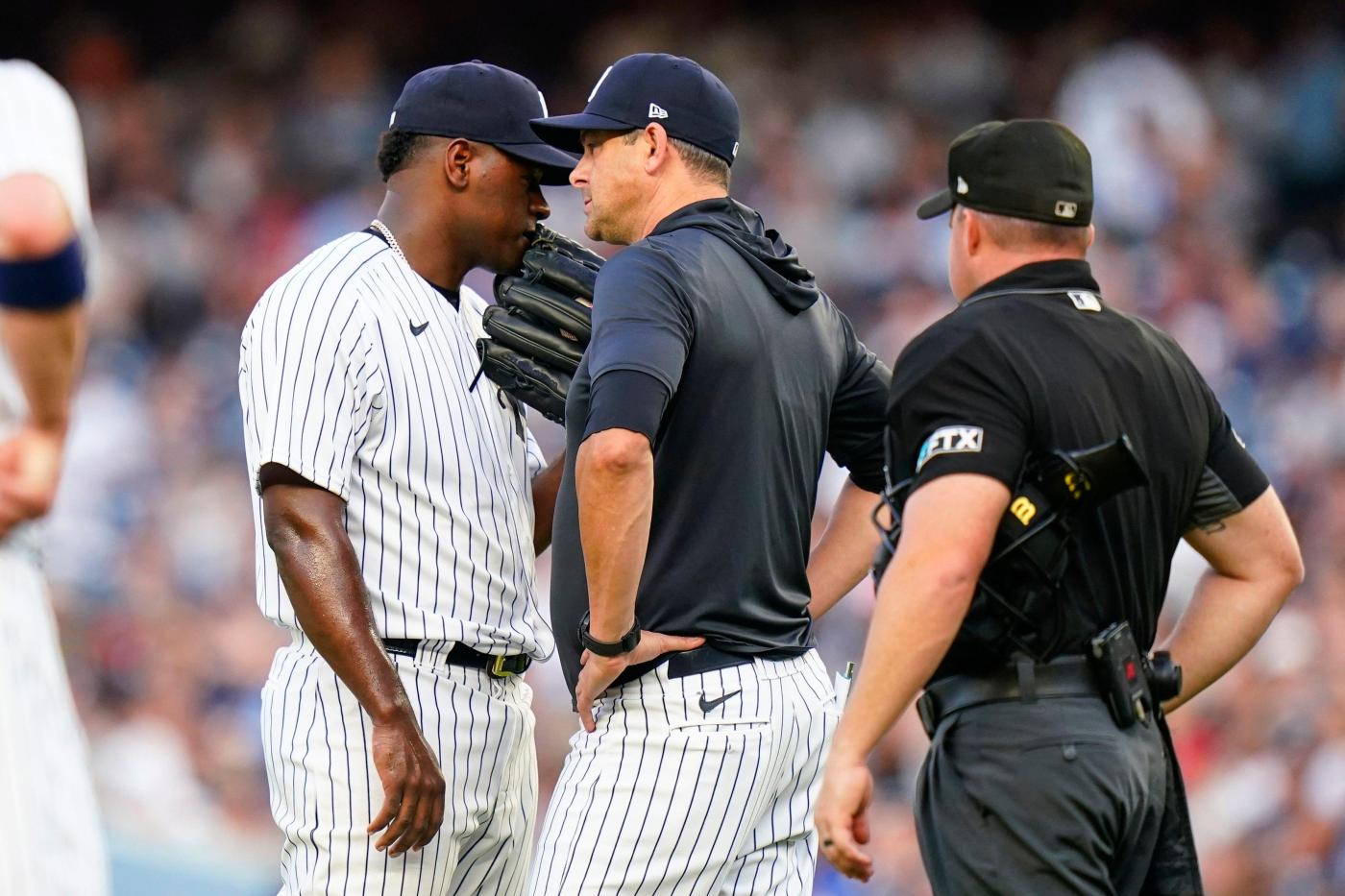 DJ LeMahieu scored the winning run on a wild pitch in the bottom of the 10th inning, giving the Yankees 62 wins before the All-Star break, tying a franchise record. Clay Holmes found the feel for his sinker again. Giancarlo Stanton hit a game-tying home run in the eighth. The Yankees snapped a season-high-tying three-game losing streak by walking off the Reds 7-6 at the Stadium Wednesday night.

But all of that was overshadowed by the sight of Luis Severino shutting it down after throwing a few warmup pitches to start the top of the third inning.

The right-hander, who has been through so many injuries over the past three years, left the game after those warm-up tosses with a tight right shoulder. He was examined by team doctors during the game, but will go to have an MRI on Thursday.

“Today I woke up not feeling that great. A little tight shoulder,” Severino said. “After going to warm up, doing all my stuff trying to get loose in the bullpen, it stayed the same in the game and I started getting tighter and tighter inning by inning.”

Severino said it did not feel as bad as last summer when a tight shoulder shut him down during rehab from Tommy John surgery and he is hopeful that with the All-Star break he has time to get through this without missing time.

“Actually, the way I feel right now, not really,” Severino said when asked how concerned he is. “I know my body. We’ll get an MRI tomorrow.”

Stanton hit his 23rd of the season to lead off the eighth inning and keep the Yankees alive. LeMahieu had two singles, his fourth multi-hit game in his last seven. Isiah Kiner-Falefa hit two doubles, including a three-run double in the Yankees’ five-run third to get back into the game.

Severino had put them in a big hole.

With lefty JP Sears warming up urgently in the bullpen behind them, Yankees manager Aaron Boone came to the mound with a trainer. Severino stepped off the mound, taking Boone with him, and apparently talked his way into finishing the inning. He coaxed a ground out from leadoff hitter Jonathan India, got Brandon Drury to strike out and then got a groundout from Tommy Pham.

Severino came out to throw some warmup pitches in the top of the third, but walked off the field.

He threw 43 pitches, 27 for strikes. Severino gave up four runs on four hits. He walked two and struck out one.

Severino came into the game 5-3 with a 3.11 ERA and had scouts around the game marveling about how he looked like had not missed any time at all. The 28-year-old, however, has missed most of the last three seasons with injuries. A torn lat muscle cost him most of the 2019 season. He returned to pitch in the playoffs that season and ended up tearing his ulnar collateral ligament. He had Tommy John surgery in March 2020. He had several setbacks during his rehab last season and only returned in September.

Severino had only pitched 27.2 innings from 2019-2021, but had looked fine until Wednesday night. He’s thrown 86 innings this season, including the two Wednesday night against the Reds. The Yankees have been cautious with Severino. Wednesday night was just his 16th start of the season, and it was pushed back to limit him to just one this final week before the All-Star break. It’s the fewest starts of the Bombers’ regular rotation, because they have been actively managing his workload, just one less than Nestor Cortes, who is also being managed because has never thrown more than 93 innings in a big league season.

They have Clarke Schmidt in Triple-A starting and Sears, who took over for Severino and then was optioned to Triple-A after the game, can step into the rotation. They also have Domingo German, who was tentatively scheduled to pitch a rehab start on Friday, returning from the injured list. And youngster Ken Waldichuk, who is headed to the Futures Game this weekend, is pushing himself into the conversation.