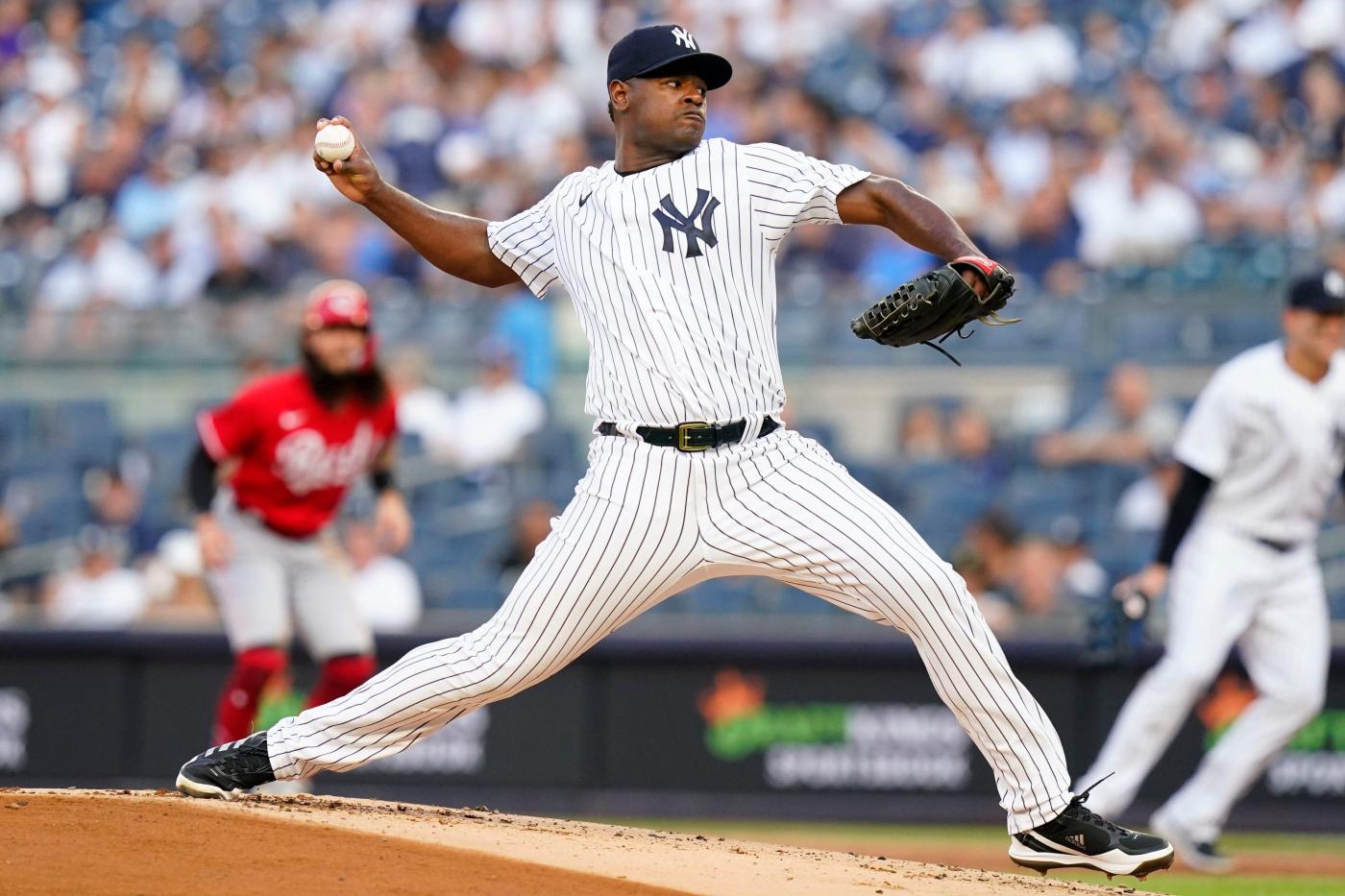 Luis Severino was on the field Friday, but the Yankees right-hander was nowhere near a mound yet. Severino, who was placed on the injured list July 14 with a strained lat muscle, was in the outfield, trying to clear the last few hurdles before he can begin his throwing program.

“He’s doing well. I think right now, if everything goes according to plan in the next couple of days, the plan is for him to start throwing on Monday,” Yankees manager Aaron Boone said before Friday’s game against the Royals at the Stadium.

While Boone would not give a timeline for Severino’s expected return, realistically he is weeks away from starting in a major league game again. That just emphasizes the Bombers need to make a deal for starting pitching before Tuesday’s MLB trade deadline.

Friday night, the Bombers lost out on their first target when the Reds sent Luis Castillo to Seattle. Ironically, Castillos first start with Mariners will likely be next week in the Bronx against the Bombers.

The Yankees have a scout in  Chicago this weekend. The A’s are playing the White Sox The A’s are expected to start Frankie Montas in this series, but the Yankees will also be looking at right-hander Paul Blackburn, who is scheduled to throw for the A’s on Saturday. Montas, 29, is also drawing heavy interest from contenders with a 1.127 WHIP and 109 strikeouts over 104.2 innings pitched. Blackburn, 23, has not yet hit arbitration. He has a 4.35 ERA with 82 strikeouts over 101.1 innings pitched. He fits the Yankees profile for under-the-radar pitchers who throw a sinker (34% of the time) that they feel they can help develop — like Clay Holmes.

The Yankees do have some young arms that could step in and play a role down the stretch as well. Clarke Schmidt and JP Sears have already made contributions. Ken Waldichuk, who is drawing interest from other teams, could also be a contributor if he isn’t used in a deal.

“I feel good about our rotation and feel really good about the guys we have in house. So those things, guys are going to start moving and going to different places. You never know what can happen over these next several hours,” Boone said. “It’s gonna be crazy, I’m sure and there’ll be surprises and we may do things, we may not. But we know we have all the people in there to do what we need to do and if we get reinforcements or don’t we’ll be prepared either way.”

Josh Donaldson went into Friday night’s game on a 1-for-15 slide with five strikeouts and a walk. The 36-year old got an infield single in Friday night’s 11-5 win over the Royals and is now hitting .203/.304/.383 with a .687 OPS. It’s not exactly what the Yankees were expecting from the former American League MVP.

“I’ve said all along,I do feel like that great run of offense is in there, we just got it just gotta get it out,” Boone said. “We gotta build some momentum and then I still think it’s in there for him to be a wrecking ball on offense. But the defense has been spectacular between him and DJ (LeMahieu) at third base. I don’t think there’s been better third base play anywhere. I mean, I can’t imagine it. …… I knew we were still getting a good defender over it third. I didn’t know we’re getting this.”

The writing was on the wall long before the Yankees pulled the trigger on the deal that brought Andrew Benintendi to the Bronx. Joey Gallo’s time with the Yankees is running out. He knows it.

Boone has to try and manage his team and manage expectations and bruised egos.

“I think our first goal, and I think everyone shares it in there, is a team goal of winning it all. So sometimes that means a diminished role here and there just when personnel changes, but it also is a situation that can create some, hopefully healthy, competition and hopefully that brings out the best of our people,” Boone said. ” I really feel like going into the final two months of the season and the dog days, especially, hopefully, it allows some more rotations to where you can keep them sharp and a little fresher. Throughout the season, and then what we hope is running into the playoff.”

The Yankees have made it clear to teams that Gallo is available for a trade.