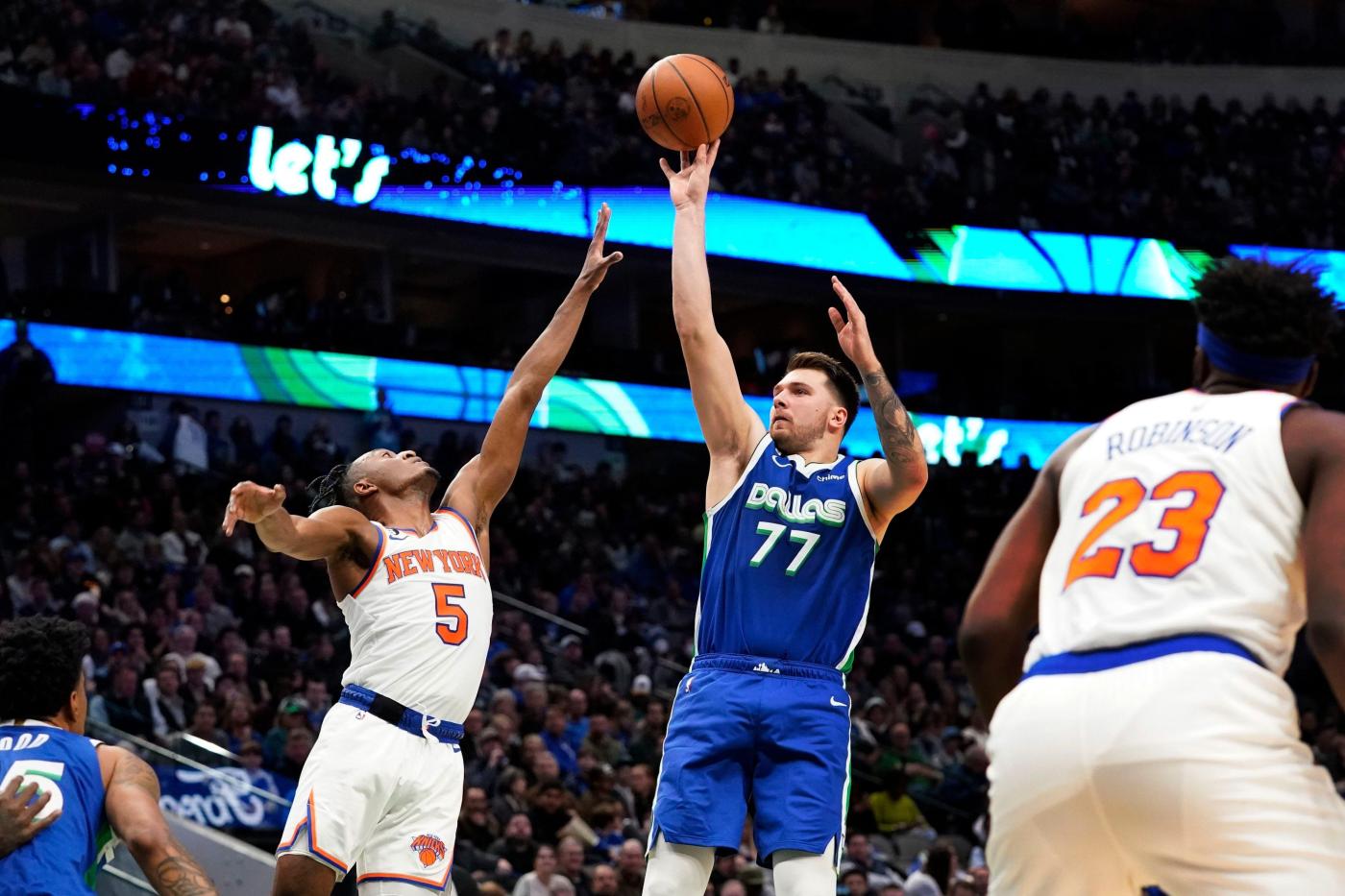 DALLAS — The Knicks collapsed and surrendered to the mighty Luka Doncic.

It was an epic meltdown or epic comeback in regulation — depending on your rooting interest — as the Knicks squandered a nine-point lead with 33.9 seconds left. Doncic, whose stat line was something out of a video game, capped the drama with a putback that tied the score with one second remaining.

It sent the game into overtime, where the Knicks predictably went cold under weary legs. Doncic finished with (shield your eyes, Knicks fans) a career-high 60 points with 21 rebounds and 10 assists.

How bad was the collapse?

According to ESPN, NBA teams were 0-13,884 in the last 20 seasons when trailing by at least nine with 35 or fewer seconds remaining.

“We gave up and-1s, we gave up uncontested shots. We missed some free throws. So it was a compilation of things,” Tom Thibodeau said. “So you give a team a second crack at things. And then you foul and give and-1s up. It doesn’t make sense.”

For the Knicks, the 126-121 OT loss was devastating and gut-wrenching but also worthy of praise given the circumstances.

New York’s Big-3, after all, was down to just Julius Randle.

Injuries to Jalen Brunson and RJ Barrett put the Knicks in a seemingly impossible spot on the road against Doncic. Yet with Randle continuing to shine in his hometown — and behind career nights from Quentin Grimes and Immanuel Quickley — they led for most of the game and nearly pulled off the upset.

Instead, the Knicks (18-17) couldn’t close and were devastated in the final 30 seconds of regulation. It also snapped their five-game winning streak in Dallas dating back to 2017.

“I’m sure if you look at the probability of us winning the game with 20 seconds left I’m pretty sure it’s like 99-point-something,” Quickley said. “We just made too many mistakes and they capitalized on it.”

Barrett left the game after just one minute with blood pouring out his index finger, the result of an inadvertent scratch suffered as Doncic swiped at the ball. Barrett was rushed to the locker room and never returned.

Brunson was ruled out before tipoff with a hip contusion. It left a starting role and 51 minutes for Quickley, who recorded a career-high 15 assists but shot just 5-for-21 — including 1-for-10 from beyond the arc. Grimes also picked up the slack with a career-high 33 points.

But the hero until the late collapse was Randle, who had 29 points with 18 rebounds in 45 minutes.

Randle, a Dallas native and resident, thrives in his games at the American Airlines Center, averaging over 30 points in his last five appearances. On Tuesday, he had a double-double by halftime and buried what looked like the dagger — a layup that gave the Knicks a 110-101 advantage.

Then the Mavericks (19-16) closed regulation with a 14-4 run in just 44 seconds. Neither Randle nor Brunson nor Barrett addressed the media after the game.

The big Brunson return game, meanwhile, never happened. There was a nice video tribute in the second quarter and a standing ovation for the former Mavericks guard, but he remained in street clothes because of a contused hip sustained two days prior.

It was Brunson’s first missed game of the season. His stated goal of appearing in every game “as long as I can walk” gave hope he’d at least attempt a start, but then Brunson didn’t participate in the morning shootaround and never warmed up pregame.

“You trust your medical team,” Thibodeau said. “Obviously Jalen has a big say in it but you put everyone together to make a good decision.”