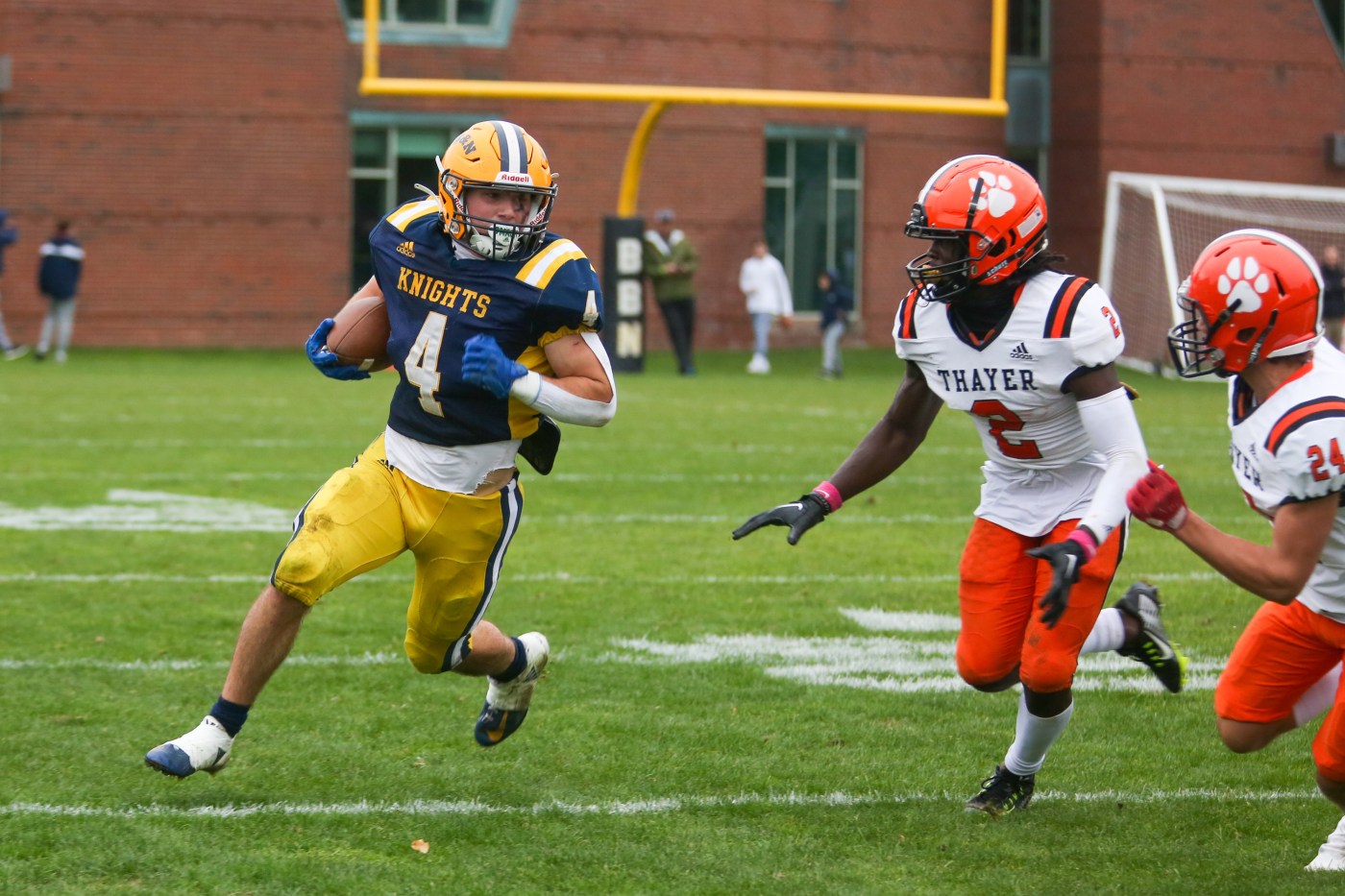 That showed right from the start of Saturday’s matchup against Thayer Academy, and after the rhythm every front stepped into, it’s safe to say that loss is far in the rearview mirror.

Bo Maccormack ran wild for 158 yards with three touchdowns, pairing with a bruising defensive effort to help the Knights (1-1) jump out to an early lead en route to a 41-20 blowout over the Tigers (1-1). Senior quarterback Henry Machnik (166 total yards, two TDs) showed extra grit and effort along the way, leading BB&N alongside Maccormack to touchdowns on six of its first seven possessions. The defense was phenomenal to allow just six points in a huge first half too, rounding out a strong bounce back performance.

“I could tell that when we got back to practice, they got after it … it’s a real credit to those guys that they go out there to practice every day and work their tail off,” Willey said. “We talked about starting fast, we talked about having our foot on the gas. The kids came out and just did that. … Thayer is a good team, they’re going to win a lot of games, so we’re happy to come out with the win.”

After the defense wore down Thayer Academy on its opening drive to force a turnover-on-downs at the Knights 31-yard-line, Maccormack wasted no time getting his team on the board first. A wide-open hole up front allowed him to bounce to the outside, and he took off for a 69-yard touchdown on BB&N’s first play.

The offense set a tone it wouldn’t fall from the rest of the first half, needing just three plays to score on the next drive after a 49-yard connection from Machnik to Isaiah Kacyvenski and a 3-yard TD run from Maccormack. Nate Austin-Johnstone (88 total yards) cut the deficit in half for Thayer with a diving 2-yard touchdown run, but the Knights needed only six plays to respond with a Maccormack 5-yard touchdown run for his third score of the day.

Once Machnik led BB&N 64 yards in the two-minute offense to a 6-yard touchdown connection between he and Brett Elliott (three catches, 38 yards) with just 11 seconds left in the half, the Knights looked completely in control holding a 26-6 lead.

“With repetition, we perfected (some plays) and then we just executed,” Machnik said. “We got a few good looks today, we like what we saw … I’m always just looking for scoring every drive.”

Defense played its typical part in the rout, producing three turnovers in all as the Tigers struggled to finish off promising drives. A 1-for-4 third down conversion rate in the first quarter played a big role, while costly penalties set up a bevy of long-yardage situations for Thayer.

“I think our (defensive) line has been getting after it and they got after it today,” Willey said.

Machnik kept the offense rolling in the third quarter with a 9-yard scramble for a touchdown on its opening drive, further cementing the win as time trickled down. Leo Sarzana added a 4-yard touchdown.

Thayer eventually added a couple of touchdowns in the fourth quarter, but by then it was too little, too late.