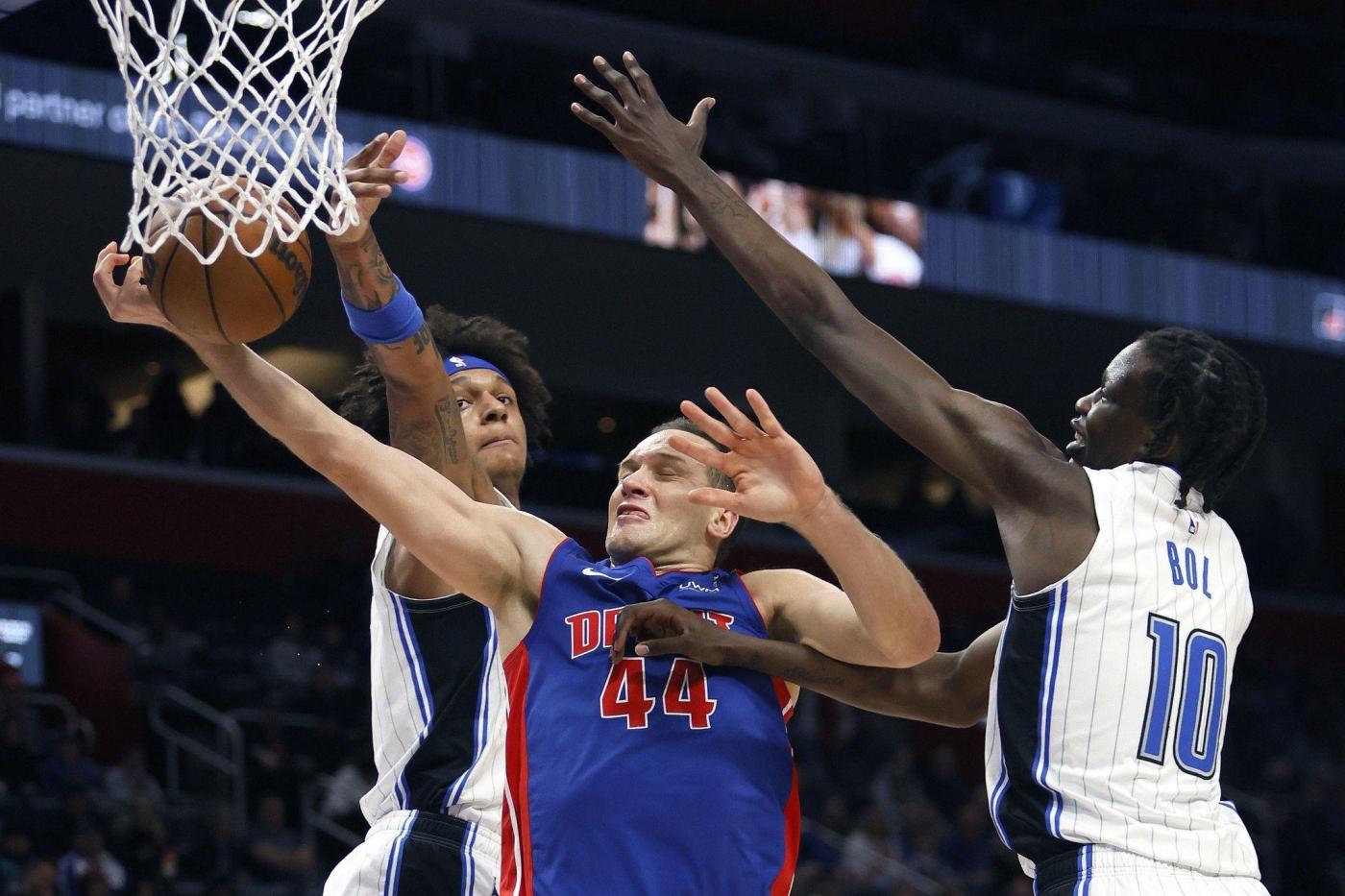 Throughout the Orlando Magic’s recent hot streak, winning eight of their previous 10 games entering Wednesday’s 121-101 loss at the Detroit Pistons, they’ve used their defense to fuel their offense.

That made Tuesday’s loss 129-110 loss to the Los Angeles Lakers at Amway Center disappointing. Coach Jamahl Mosley and Markelle Fultz said the Magic allowed missed shots to affect their defense against the Lakers.

The same appeared to happen against the league-worst Pistons.

Orlando accomplished what it prioritizes the most — protecting the paint (24 allowed) — but didn’t make the necessary efforts to close out to shooters, especially in the second quarter in which the Magic were outscored 39-24.

Alec Burks led the Pistons with 32 points off the bench on 10-of-11 shooting, including 6 of 7 on 3s. Saddiq Bey also knocked down six 3s, scoring 28 points.

Wednesday was an opportunity for the Magic to get right defensively after having the league’s fifth-best defensive rating (109) in their previous 10 games, but they turned in another lackluster performance for their second consecutive loss.

Moe Wagner was among three players ejected for their roles in the altercation during the second quarter.

Wagner was assessed a Flagrant Foul Penalty 2, which results in an ejection, for shoving Pistons guard Killian Hayes into Detroit’s bench on the sideline as Hayes was attempting to chase down a loose ball in Orlando’s backcourt with 33.2 seconds remaining in the first half.

The heated turmoil between the teams broke out after Wagner’s shove.

The entire Pistons’ roster surrounded Wagner before the Magic’s nearly entire bench — players and coaches — ran over to the Pistons’ side, leading to heated shoving and words exchanged.

A pair of Pistons assistant coaches covered Wagner up during the altercation before he was helped back to his feet and walked off the court.

The officials reviewed the altercation for nearly 10 minutes before Wagner, Diallo, and Hayes were ejected.

Diallo and Hayes were deemed escalators of the confrontation and given technical fouls, resulting in their ejections.

Wednesday was the first matchup between the Magic and the Pistons since Orlando lost to Detroit to open the season on Oct. 19.

“We’ve grown a ton,” Mosley responded when asked pregame how Orlando has grown since opening night. “Obviously, getting our guards back in the fold is a huge deal. Our decision-making has gotten better. Our defense has gotten better. Other than last night, we’ve made tremendous strides defensively.”

Mosley said Wendell Carter Jr. remained on a minutes restriction but that he’d look to play him a couple of more minutes Wednesday after playing 19 minutes Tuesday.

Carter had 16 points and 8 rebounds in 24 minutes Wednesday.

“He’s performed great in the role he’s in right now, just trying to get himself back into shape. We’ll ramp up the minutes as each game goes on. He’s finding his way and finding his groove after being out,” the coach said.

Isaac was assigned to the organization’s G League team, the Lakeland Magic, for practices Tuesday.