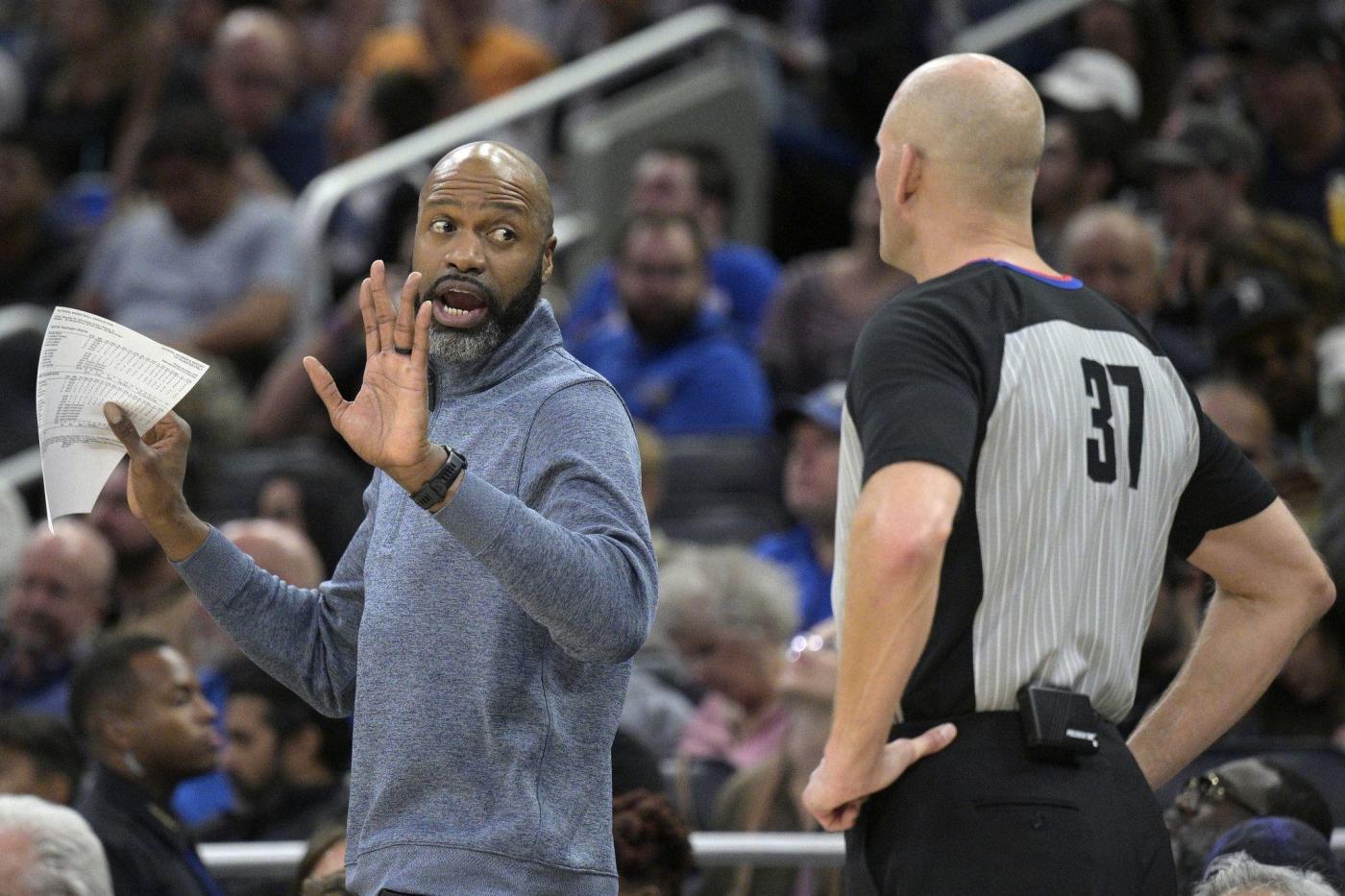 Just as the Orlando Magic were starting to adapt to having more players available, they were back to having a limited roster for their 119-100 home loss to the Washington Wizards.

The Magic only had eight players available Friday at Amway Center because of the punishments from Wednesday’s on-court altercation during the road loss to the Detroit Pistons.

“We’ve been in this situation before, obviously, through injuries, through COVID[-19],” coach Jamahl Mosley said pregame. “Guys understand it’s their opportunity.”

The Magic fought and kept the game close early, trailing 56-47 headed into halftime, but the Wizards outscored Orlando 42-26 in the third to make the game non-competitive in the fourth, giving the Magic (13-24) their third consecutive loss after winning eight of the previous nine games.

The victory was the Wizards’ fourth consecutive win, giving them a 16-21 record.

Moe Wagner was suspended for two games for his role in the incident while eight other Magic players were issued one-game suspensions for leaving the bench area during the altercation — a violation of the league’s rules.

Schofield, Kevon Harris and Franz Wagner will serve their suspensions on Jan. 4 vs. the Oklahoma City Thunder. Moe Wagner served the first game of his suspension Friday and will serve the second vs. the Thunder.

The suspensions are being staggered so the Magic will have eight available players — the league-mandated minimum for a team to play a game — for their next two matchups.

Orlando’s struggles with finishing inside, 62 points in the paint but on shot 47.8% on those attempts in the first three quarters, seemed to affect their defensive intensity in the third. It also allowed for easier scoring opportunities for the Wizards in transition.

After trailing 27-16 late in the first, the Magic used a 16-0 run that ended early in the second to take a 32-27 lead before they trailed at halftime.

Nearly the Magic’s entire bench left their side of the floor to help Moe Wagner at the Pistons’ bench during the physical confrontation Wednesday — resulting in half the team being suspended.

Wagner was assessed a Flagrant Foul Penalty 2, which results in an ejection, for shoving Pistons guard Killian Hayes into Detroit’s bench on the sideline as Hayes was attempting to chase down a loose ball in Orlando’s backcourt with 33.2 seconds remaining in the first half.

The league said in their Thursday release that Moe Wagner committed “an unsportsmanlike act when he pushed Hayes into the Detroit bench while both players were pursuing a loose ball.”

“The league made the decision that it made,” Mosley said. “We’re going to leave it at that. The league made it’s decision and we take responsibility for whatever actions we played in that part. Now, we have to move forward.”

The heated turmoil between the teams broke out after Wagner’s shove.

“He’s doing OK,” Mosley said of Moe Wagner. “Obviously understanding the situation, what happened and what was caused. The one thing about Moe is he’ll reflect on it, understand what could’ve been done differently. Our guys reflect on it. We all look at it as now it’s a learning experience that we have to take, learn from and move forward.”

The entire Pistons’ roster surrounded Wagner before the Magic’s nearly entire bench — players and coaches — ran over to the Pistons’ side, leading to heated shoving and words exchanged.

Moe Wagner, Diallo, and Hayes were ejected. Diallo and Hayes were deemed escalators of the confrontation and given technical fouls, resulting in their ejections. The league suspended Hayes for the Pistons’ next three games while Diallo was assessed a one-game suspension.