Todays Though > News > Marquee Sports Network ratings have dropped 56% since its launch. Here’s how the Chicago Cubs’ cable TV home is faring in Year 3.
News

Marquee Sports Network ratings have dropped 56% since its launch. Here’s how the Chicago Cubs’ cable TV home is faring in Year 3. 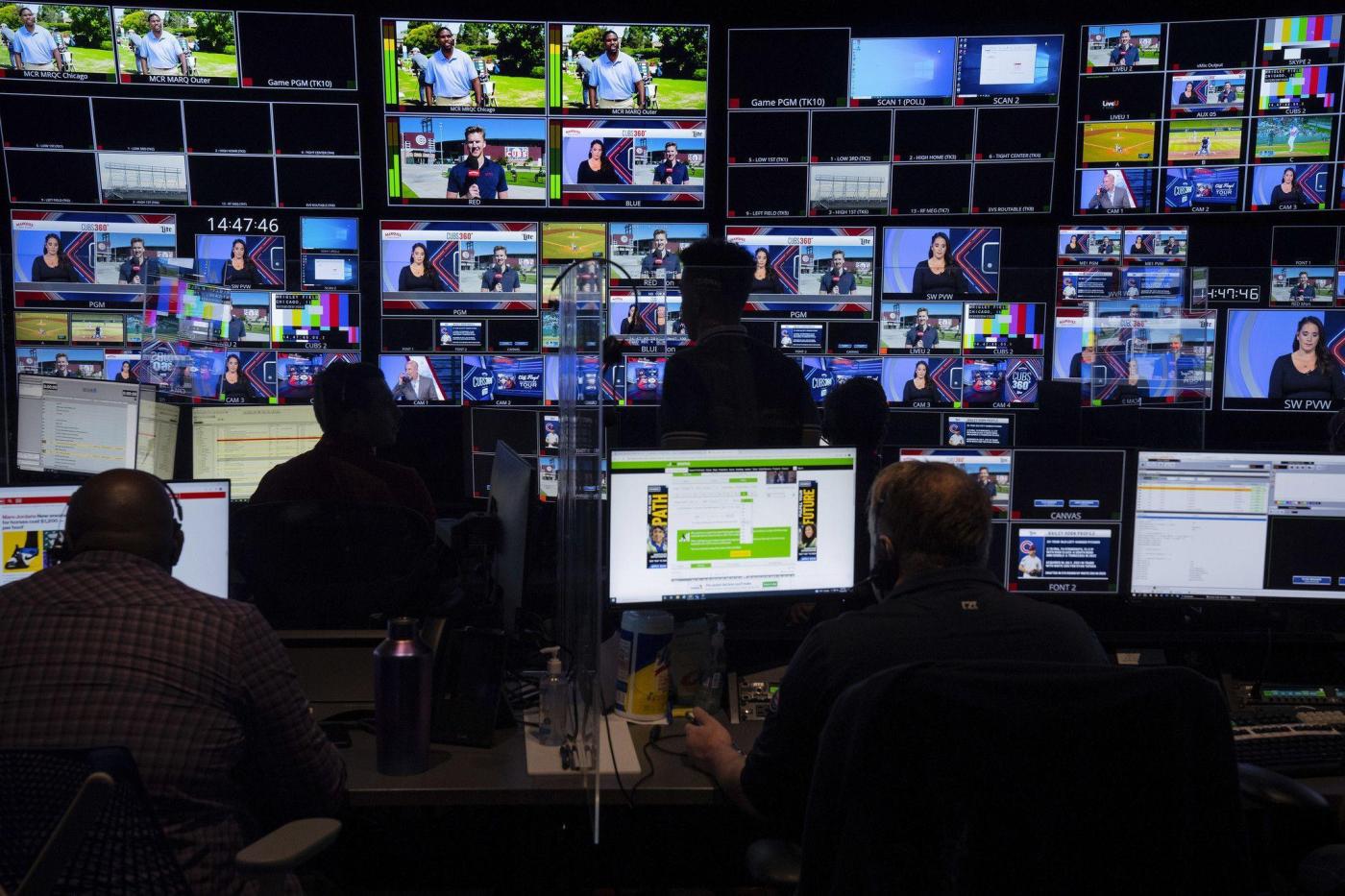 When the Chicago Cubs launched the Marquee Sports Network in February 2020, it was the culmination of a decade-long quest to create a dedicated 24/7 cable TV platform for the team, which was still soaring in the wake of its first World Series championship in more than a century.

Right off the bat, the inaugural opening day was postponed for two months after the pandemic hit. Marquee cobbled together a cable distribution network in time to carry the made-for-TV games, where cardboard fans and fake crowd noise provided the backdrop for the shortened 2020 season.

Since then, the Cubs have been mired in back-to-back losing seasons, viewership on Marquee has fallen by 56% and regional sports networks, long the cash cow of cable TV, are struggling as providers cut back on live sports programming.

“We launched into a headwind,” said Crane Kenney, president of business operations for the Cubs. “We had a pandemic when we launched, but also cord-cutting had become a big obstacle.”

Sinclair’s debt-laden Diamond Sports Group subsidiary has since been bleeding red ink amid declining revenues for its Bally RSNs, and some analysts believe it may be on the verge of bankruptcy. Kenney said Marquee is an “independent network” that is insulated from Diamond’s financial woes.

A Sinclair spokeswoman did not respond to a request for comment.

Marquee became the exclusive local TV home for the Cubs after the team parted ways with NBC Sports Chicago, the regional sports network it formed in 2004 with the Bulls, Blackhawks and White Sox. The Cubs also exited local over-the-air TV after 71 years, pulling the plug on WGN-Ch. 9 and WLS-Ch. 7.

The Cubs are netting more than $90 million in annual TV rights fees from Marquee, up from $60 million per year the team earned through NBC Sports Chicago and broadcast TV, according to sources familiar with the deal.

Marquee is available in about 3 million homes in the Chicago area. Cable providers include RCN Chicago (now Astound), AT&T and Comcast, which struck a “multiple year” carriage agreement with Marquee just ahead of the pandemic-delayed opening day in July 2020.

The nascent network debuted with a 3.57 rating during the inaugural season, reaching about 116,000 households per game, according to Nielsen data supplied by the Cubs. By comparison, the team averaged a 4.5 rating on NBC Sports Chicago during its championship season in 2016.

As fans returned to the ballparks in 2021, the Cubs on-field performance spiraled downward, with the team trading away the World Series core of Anthony Rizzo, Javy Baez and Kris Bryant, and stumbling to its first losing season in seven years. Ratings for Marquee followed suit, with Cubs viewership dropping 41% to a 2.1 rating in the Chicago market, according to Nielsen.

This year, Cubs games on Marquee fell another 25% during a second consecutive losing season, averaging a 1.57 rating. The Cubs averaged a 1.5 rating on NBC Sports Chicago, then known as Comcast SportsNet, during the last pre-World Series losing season in 2014.

Ratings generally translate into revenue, both in the carriage fees that networks can command from pay-TV providers and advertising rates charged to sponsors.

Marquee declined to disclose revenues, but said advertising sales have increased by an average of 3% per year since the 2020 launch.

NBC Sports Chicago did not respond to a request for comment.

In 2019, Chicago-area Comcast subscribers paid an $8.25 per month regional sports fee, meaning it has more than doubled since the launch of Marquee.

S&P Global Market Intelligence puts the current average subscriber fee at $7.50 per month for NBC Sports Chicago and $6.39 per month for Marquee across all pay-TV providers in the Chicago market.

The Cubs network is faring better than many competitors as regional sports networks struggle to navigate the changing pay-TV landscape, where cord-cutting and streaming have eroded subscribers and squeezed the carriage fees providers are willing to pay for sports, long the glue holding together the cable bundle.

More than 48 million households have abandoned traditional cable or satellite video service since 2010, with only a third of them offset by gains at virtual streaming providers such as Hulu + Live, YouTube TV, SlingTV and DirecTV Stream, according to a September report from industry analysts MoffettNathanson.

That leaves about 79 million linear pay-TV subscribers at the end of the second quarter, or about 62% of U.S. households, the lowest penetration level since 1993. The pay-TV industry is “hurtling” to 50 to 60 million subscribers, with sports and news providing a floor for the traditional cable bundle, the report said.

With consumer demand falling, pay-TV providers are cutting back on the distribution fees they will pay for regional sports networks, or dropping them all together.

“Regional Sports Networks are unraveling,” MoffettNathanson said in its report.

In 2019, Sinclair acquired 21 former Fox regional sports networks from Disney for $9.6 billion. Its Diamond Sports Group subsidiary, which owns the rebranded Bally Sports networks, is carrying about $8 billion in debt and has incurred operating losses since the second quarter of 2020, according to Sinclair’s 2021 annual report, filed in June.

The Diamond subsidiary is also 50% owner of Marquee with the Cubs, and has a 20% stake in the Yankee Entertainment and Sports Network, known as the YES Network.

Sinclair is weighing everything from selling the Bally RSNs to filing bankruptcy for its Diamond Sports subsidiary, according to a report by the New York Post, citing sources close to the situation.

Rhode Island-based Bally’s, which filed an application with the Illinois Gaming Board to build a proposed $1.74 billion casino complex on the site of the Freedom Center printing plant in Chicago’s River West neighborhood, has some skin in the game with Sinclair.

“Because it was acquired with a lot of debt, and because its performance is bad, it looks like it will have to go through a restructuring,” Kim said Friday. “We don’t know exactly how that restructuring will play out as relates to our relationship with the company.”

A number of traditional pay-TV providers have dropped RSNs completely, including Dish Network, while virtual services such as Hulu + Live TV and YouTube TV service have also pared back their local sports offerings. An inaugural Marquee partner, Hulu + Live TV shed the full Sinclair RSN portfolio, including the Cubs network, Bally Sports and YES, in October 2020.

“They’re going to be smaller businesses than they were,” Ganis said.

One possible solution, still in the early innings, is to bypass cable and go direct-to-consumer with a streaming regional sports network.

In June, New England Sports Network launched the first direct-to-consumer streaming subscription service, offering more than 220 live Boston Red Sox and Bruins games for $30 per month, or an annual $330 payment. NESN is owned by the Red Sox and Bruins.

Bally Sports rolled out a streaming service across all of its markets in September. For $20 per month or an annual fee of $190, subscribers get local NBA and NHL games, with baseball initially limited to five markets — Detroit, Kansas City, Miami, Milwaukee and Tampa Bay — pending further negotiation for streaming rights with Major League Baseball, according to a Bally Sports news release.

This month, the Los Angeles Clippers launched ClipperVision, a regional subscription streaming service, offering the vast majority of the NBA team’s games to Southern California viewers for $199 per season.

The Cubs plan to introduce their own direct-to-consumer streaming service, perhaps as early as next season.

“That is certainly the goal,” said Mike McCarthy, Marquee’s general manager. “And we’re watching very closely what the others have done.”

McCarthy, 62, a soft-spoken veteran sports executive who previously headed MSG Network, was brought in to launch and lead Marquee into the competitive RSN ecosystem in 2019. Under his guidance, Marquee has filled the schedule beyond the 146 Cubs games and 39 minor league games it aired this year with documentaries, studio shows such as “Cubs 360” and enough peripheral programming to sate even the most diehard Cubs fans.

Marquee earned three regional Emmys last year, which are propped against the wall at Kenney’s office adjacent to the extensively remodeled Wrigley Field. The network is nominated for 12 regional Emmys this year, with Kenney giving all the credit for Marquee’s critical success to McCarthy.

At his modest office inside the Marquee studios, housed in the former Cubs administrative offices across Waveland Avenue from Wrigley Field, McCarthy said the formula for success is simple.

“I look at it as a television network with a guaranteed hit show, which is the Cubs game,” McCarthy said. “A lot of TV networks would be very envious of a starter kit like that.”

Marquee is available on more than 50 cable providers, as well as virtual platforms DirecTV Stream and fuboTV, within the four-state MLB home market, but its reach is shrinking as more subscribers cut the cord. McCarthy acknowledged that the RSN model has changed, but sees opportunity in a direct-to-consumer streaming future to recapture Cubs fans that are not cable subscribers.

“The traditional cable subscription, it looks a little different than it used to,” he said. “There may be some shrinkage, but there’s also some upside and optimism when it comes to streaming and digital consumption of our content.”

MLB.TV, the direct-to-consumer streaming service offered by Major League Baseball, allows fans to watch out-of-market games, but blacks out teams within their home market territory. The DTC service in the works for Marquee would allow the Cubs to stream within their home territory — but not outside it — as an extension of their local TV rights.

The Red Sox have already established that precedent with their new streaming service, Kenney said.

“We have those rights,” Kenney said. “If we wanted to launch a DTC product, and lift the exact version of Marquee that you get on cable and offer it to a home directly we could do that.”

Kenney said reports of the cable bundle’s demise are exaggerated, and that traditional and streaming RSN platforms will “live side-by-side” for years.

At the same time, he acknowledges that the team was a little late to the game in launching its cable network.

“If we could do anything over, I wish I could have done it sooner,” Kenney said.