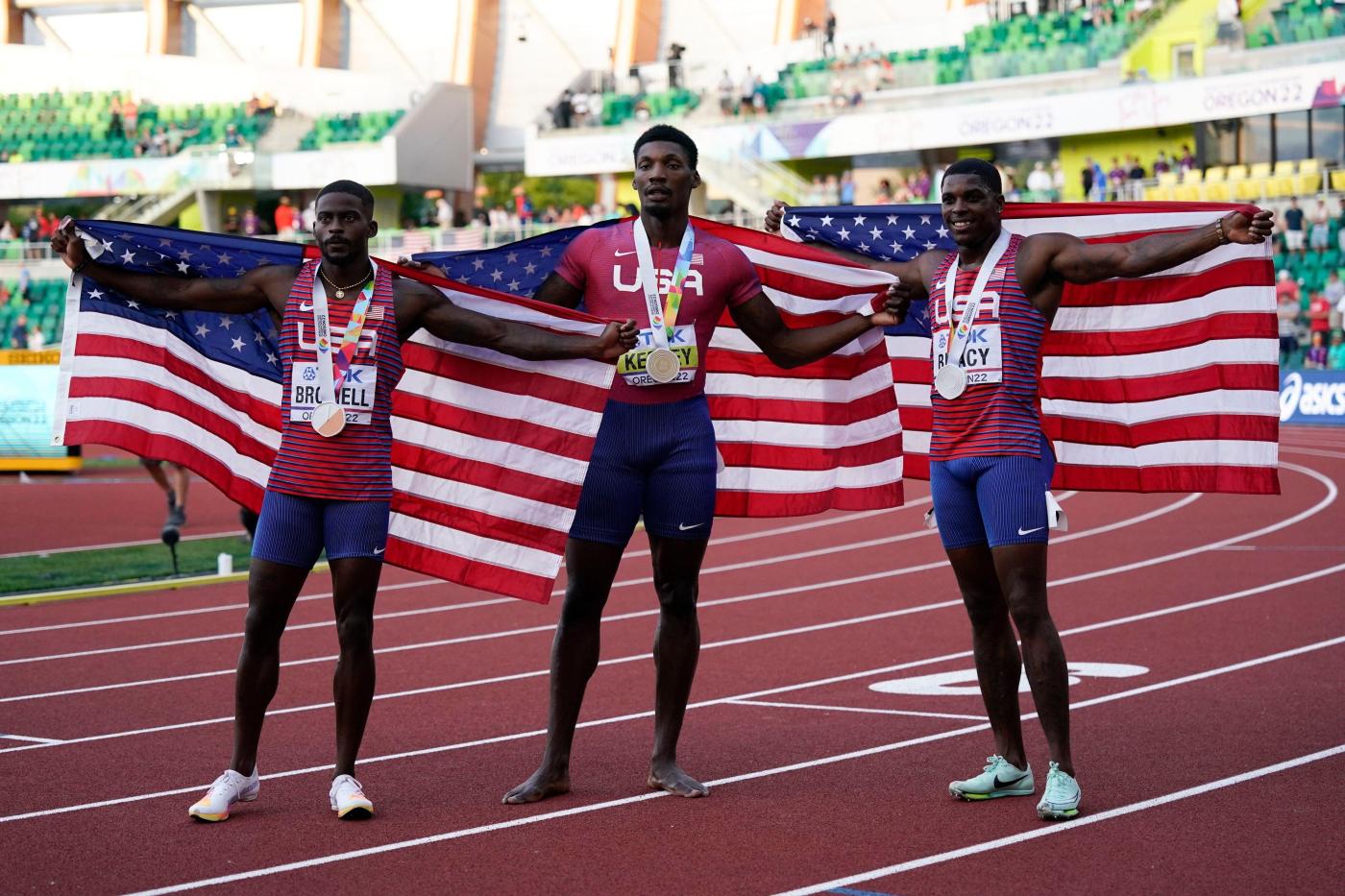 Marvin Bracy gave away nearly three years of his track career in a failed attempt to make the NFL as a wide receiver.

But the former Boone High School football/track speedster never stopped believing he could be one of the fastest men in the world. He proved to be just that on Saturday with a silver-medal performance in the 100-meter dash at the world championships of track and field in Eugene, Oregon.

“I thought I won. Fred is a helluva finisher. He got me,” Bracy said in a phone interview with the Sentinel on Monday.

Trayvon Bromell, Bracy’s Jacksonville Tumbleweed Track Club training partner, matched his 9.88 time for third in a photo finish as the U.S. swept the medals for the first time in a World Athletics Championships or Olympic event since Carl Lewis, Leroy Burrell and Dennis Mitchell went 1-2-3 in 1991.

“To walk away from my sport, come back and get the job done, it means the world to me,” Bracy said. “It’s everything I sacrificed for. We got a sweep and I ran a fast time in a very high-level race.”

Bracy reached the Olympic semifinals with a 10.08 time in Rio de Janeiro, Brazil, in 2016. A hamstring injury suffered in the U.S. Trials denied him a 2020 Olympic berth.

Before that he was mostly renowned for his quick starts as a four-time national indoor champion in the shorter 60-meter dash. He was the world silver medalist at that distance in 2014 before his 2017-19 football foray. Saturday’s performance proved he can sustain speed in the longer sprint in a race against the best in the world.

“The track and field community respects outdoor events a lot more,” Bracy acknowledged. “To come out on a global level, in America, and run the 100-meter dash and come so close to winning it all. … That’s so big. It puts me in the top level of sprinting.”

He will get more chances to prove that and collect more prize money in upcoming European meets.

“Now it’s about building on this,” Bracy said. “I know I was hundredths of a second from winning. We’ll do the things we need to work on and come back next year and win the World Championship.”

First he hopes to claim a gold medal in the 4×100 relay, which has heats on Friday before the Saturday night final as the championships continue.

Bracy has been making up for lost time since he returned to track and earned an endorsement deal with Nike.

“I came back with a different mentality,” he said. “I knew if I worked a little harder I could be one of the best guys in this sport.”

He’s not yet near the finish line of his career.

“I’ll be running until the wheels fall off,” he said with a laugh. “I’m still young. There’s another World Championship in 2023, Olympics in 2024 and a World Championship the year after that. I plan to be running through 2025 at the very least, and then at some point I’ll be a full-time parent.”

Bracy lengthened his last name to Bracy-Williams Jr. on his social media accounts to include the last name of his father, who was killed 18 years ago. He did so to pass on the surnames of both his mother and father to his 4-year-old son, Marvin III.

Kerley, the 2022 world leader with a 9.76 personal best, is the third consecutive U.S. winner in the World Championships 100 after Jamaican sprinters won four in a row, including three by world-record-holder Usain Bolt. Floridian Justin Gatlin won the dash in 2017 and Christian Coleman prevailed for the U.S. in 2019.

This story was first published at OrlandoSentinel.com. It includes content from wire services. Varsity Content Editor Buddy Collings can be reached by email at [email protected].