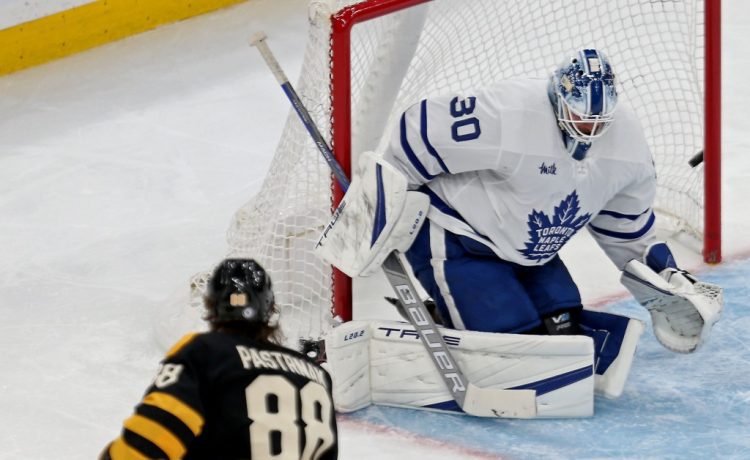 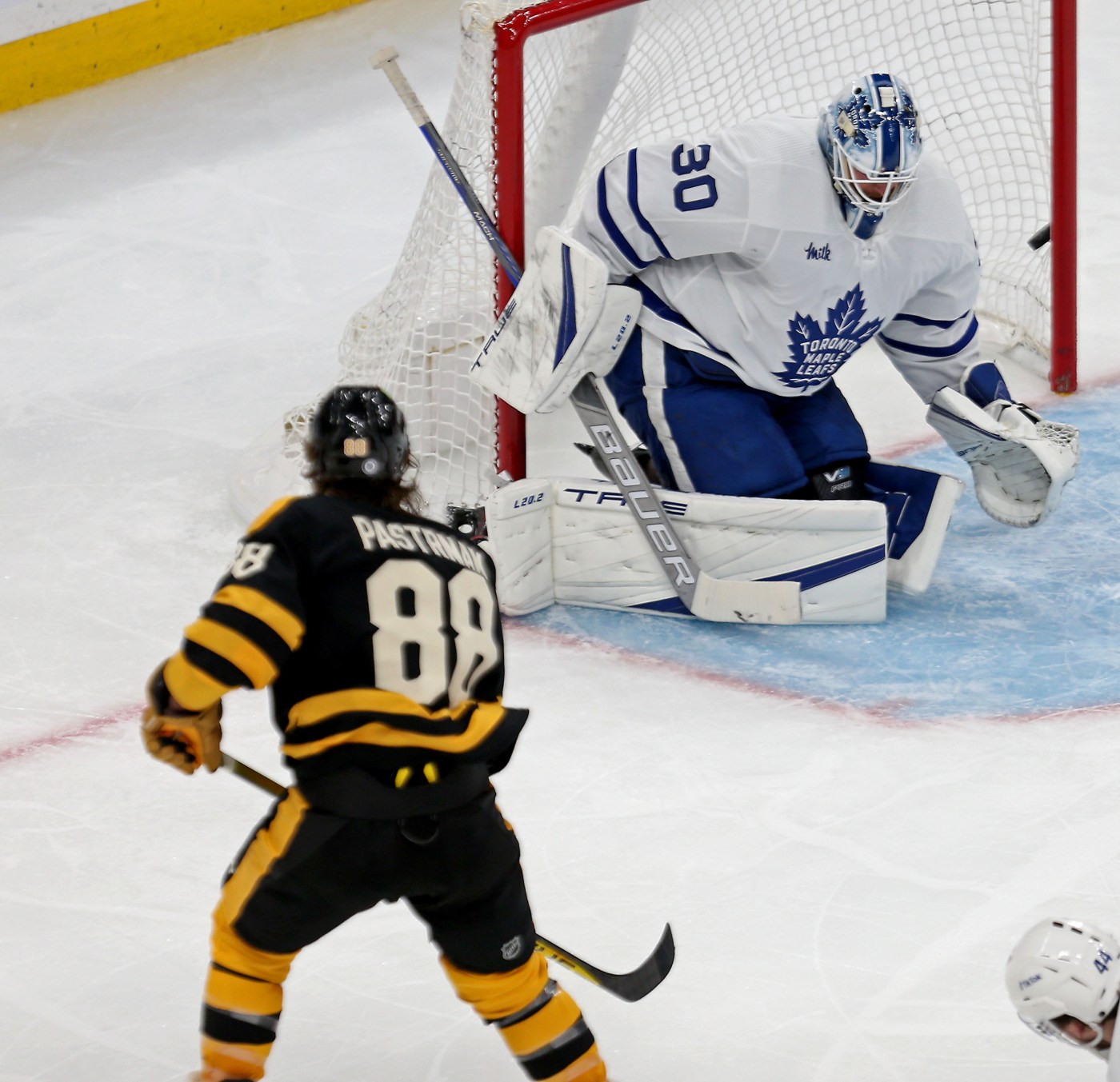 The Bruins and Maple Leafs provided everything you could have hope for with a Saturday night divisional rivalry game that we see so few of these days.

Bad blood, 10-bell saves, big hits, star turns, lead changes. Even an honest to goodness fight. It had it all. And for the Garden faithful, it had a happy ending.

Matt Grzelcyk blasted a a slap shot past Toronto goalie Matt Murray with 1:16 left in the third period to lift the B’s to a wildly entertaining 4-3 win on Causeway Street.

The B’s took a 3-2 lead into third period, but it didn’t last long, thanks to a sublime shot by Auston Matthews. First, Mitch Marner stole the puck from Hampus Lindholm behind the B’s net and fed Michael Bunting out at the right circle. Bunting dished to Matthews, who cut to the right before getting back on his forehand and roofing a short side shot in tight at 3:17.

It was quite a night.

The game got off to a rollicking start. The B’s were all over the Leafs on the first couple of shifts and had a golden chance to take the first lead of the game. With the Leafs’ heads spinning and the B’s changing out on the fly, Charlie Coyle fed Brad Marchand for what looked like a sure goal but Murray robbed him with a brilliant glove save.

Then at 2:43, two veteran fourth line warriors, Nick Foligno and Wayne Simmonds, rose to the moment and dropped the gloves for a marathon bout to the the delight of the fans. With the reach advantage, Simmonds landed more shots, but Foligno got a few in of his own and the bout ended with a show of respect from both combatants.

But it was the Leafs who grabbed the first lead of the game after Charlie McAvoy hauled down Calle Jarnkrok. On the Toronto power play, John Tavares made a move toward the back of the net before curling a beautiful pass in front to Bunting, who chipped it over Linus Ullmark from the low slot.

Ullmark made several high grade saves to keep the deficit at one, including a point blank stop on Justin Holl and another one on Matthews. And after Marner missed an open net from a tough angle with Ullmark down, the B’s went on a rush that would eventually lead to the equalizer at 15:02.

It appeared Morgan Rielly had thwarted the rush but he fanned on his clear attempt and Marchand picked it off. Marchand, who landed four shots on Murray in the first without any luck, took a different tact this time. He held onto the puck, cruised into the left circle and made a perfect tape-to-tape pass to Patrice Bergeron at the top of the crease for the captain’s 16th. Bergeron barely had to move his stick.

The B’s flurried late in the period and wound up with a 15-5 shot advantage, but it didn’t feel that lopsided with the quality of chances the Leafs had.

The Leafs jumped back on top at 2:43 of the second on an uncharacteristic goal allowed by Ullmark, who seemed surprised by a long distance Pierre Engvall shot from above the circles and he missed it with his left pad.

Again, the B’s came back. David Pastrnak sniffed out a bad blind D-to-D pass attempt on the blue line from Conor Timmins and he deflected it out of the zone. As Pastrnak chased down the loose puck on the left side, he had Marchand coming up on his right for a 2-on-0. But Pastrnak kept it and zipped his 33rd under Murray to tie it again at 5:52.

Then came white-knuckle time in the B’s end. With the B’s hemmed in their own end, the Leafs were buzzing and had two great chances that were thwarted. First, Taylor Hall laid out to block a Mark Giordano pass that would have provided Engvall with a tap-in. The puck came right back to Giordano, who then was robbed Ullmark’s glove.

With the crowd still buzzing over that, the B’s took their first lead on a fourth line goal. Tomas Nosek took a serpentine route through the neutral zone and dished it to Foligno on the left wing. Foligno made nifty pass into the high slot for A.J. Greer, who had played just once since Dec. 31. With a low wrister from the slot, Greer scored his first goal since Oct. 18 at 10:33, snapping his fourth goal of the year through Murray’s pads.

The B’s appeared set to go up by two goals with a shorthanded rush started by a Pavel Zacha bock. Lindholm grabbed the loose puck and went off on a 2-on-1 with Zacha. The defenseman’s shot produced a room service bounce to Zacha, who had the gaping net at which to shoot but he hit the outside of the post.

Tempers rose again at the end of the second as both teams jawed at each other at the red line, with Greer and Simmonds both getting 10-minute misconducts to start the third.