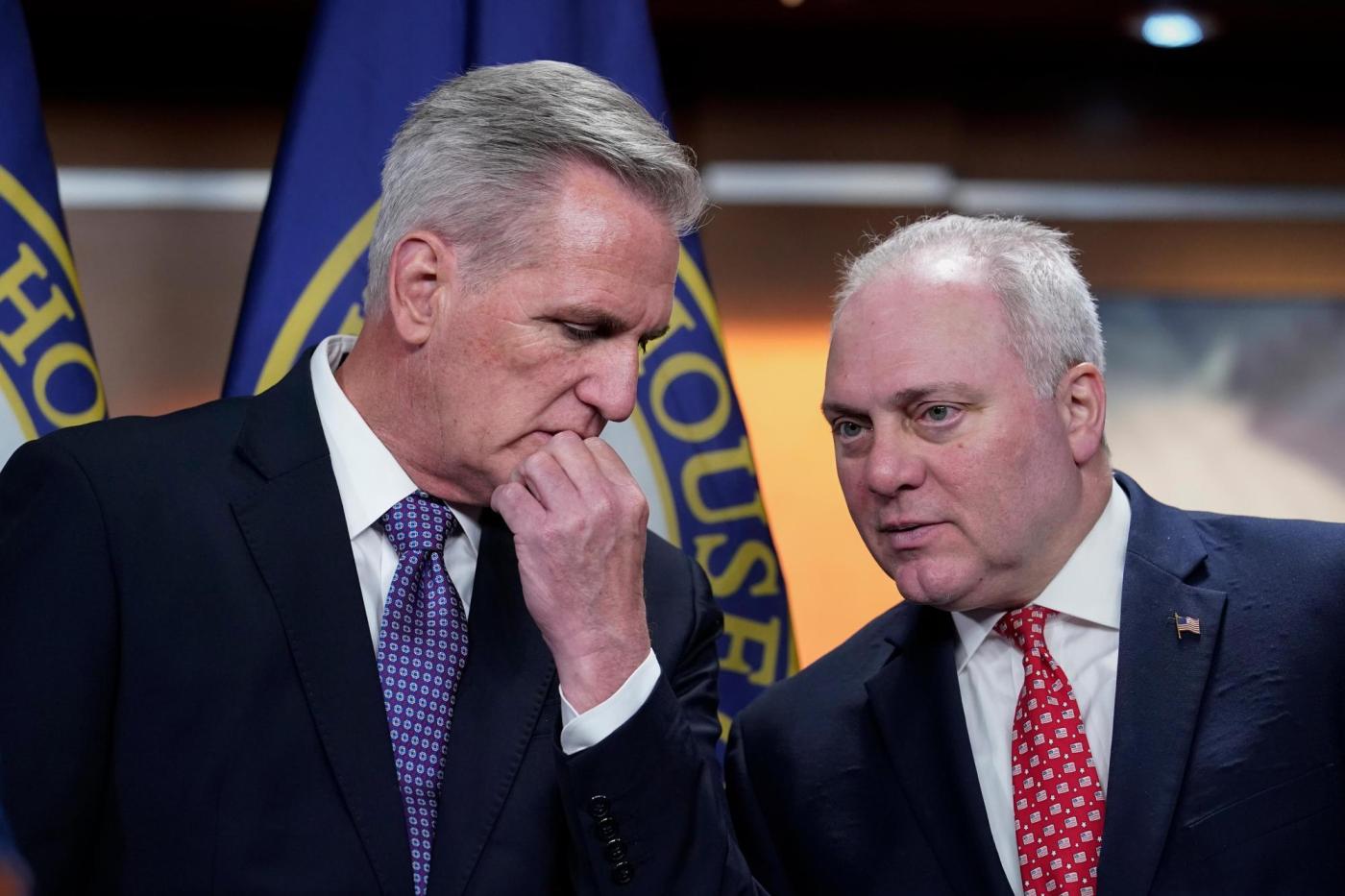 A second round of voting was swiftly underway.

Rep. Jim Jordan of Ohio, who got six votes on the first ballot, rose to agree that McCarthy should get the post. He said, “We have to rally around him, come together,” he said.

But Rep Matt Gaetz of Florida followed with a vigorous re-endorsement of Jordan. underscoring the jumble within the party. And Jordan had eight Republican votes eaerly in the second round, more than enough to again keep McCarthy from a majority.

McCarthy had pledged a “battle on the floor” for as long as it takes to overcome right-flank fellow Republicans who were refusing to give him their votes. But it was not at all clear how the embattled GOP leader could rebound after becoming the first House speaker nominee in 100 years to fail to win the gavel from his fellow party members on the initial vote.

McCarthy strode into the chamber, posed for photos, and received a standing ovation from many on his side of the aisle after being nominated by the third-ranking Republican, Rep. Elise Stefanik, who said the Californian from gritty Bakersfield “has what it takes” to lead House Republicans.

“No one has worked harder for this majority than Kevin McCarthy,” said Stefanik, R-N.Y.

But a challenge was quickly raised by Rep. Andy Biggs, R-Ariz., a conservative former leader of the Freedom Caucus, who was nominated by a fellow conservative as speaker. In all, 19 Republicans peeled away, denying McCarthy the majority he needs as they cast votes for Biggs or others in protest.

The mood was tense, at least on the Republican side, as lawmakers rose from their seats, in a lengthy first round of in-person voting. Democrats were joyous as they cast their own historic votes for their leader, Rep. Hakeem Jeffries of New York, the first Black person to lead a major American political party.

“We may have a battle on the floor, but the battle is for the conference and the country,” McCarthy said earlier at the Capitol.

In the final tally, McCarthy won 203 votes, with 10 for Biggs and nine for other Republicans. Jeffries, the Democratic leader, actual won the most, 212 votes. But no nominee won the majority.

McCarthy emerged from a contentious closed-door meeting with fellow House Republicans unable to win over detractors and lacking the support needed to become speaker. He vowed to fight to the finish — even if it takes multiple tries in a public spectacle that would underscore divisions in his party and weaken its leadership in the first days of the new Congress.

A core group of conservatives led by the Freedom Caucus and aligned with Donald Trump’s MAGA agenda were furious, calling the private meeting a “beat down” by McCarthy allies and remaining steadfast in their opposition to the GOP leader.

“There’s one person who could have changed all this,” said Rep. Scott Perry, R-Pa., the chairman of the Freedom Caucus and a leader of Trump’s effort to challenge the 2020 presidential election.

The group said McCarthy refused the group’s last-ditch offer for rules changes in a meeting late Monday at the Capitol.

“If you want to drain the swamp you can’t put the biggest alligator in control of the exercise,” said Rep. Matt Gaetz, R-Fla.

Lawmakers convened in a new era of divided government as Democrats relinquish control of the House after midterm election losses. While the Senate remains in Democratic hands, barely, House Republicans are eager to confront President Joe Biden’s agenda after two years of a Democratic Party control of both houses of Congress.

Outgoing House Speaker Nancy Pelosi had gaveled closed the last session moments earlier, moving aside for new Democratic leadership, to a standing ovation from colleagues on her side of the aisle.

The chaplain opened with a prayer seeking to bring the 118th Congress to life.

But first, House Republicans had to elect a speaker, second in succession to the presidency.

Even with an endorsement from former President Trump, McCarthy fell short.

Democrats enthusiastically nominated Jeffries, D-.N.Y., who is taking over as party leader, as their choice for speaker — a typically symbolic gesture in the minority but one that took on new importance as Republicans were in disarray.

“A Latino is nominating in this chamber a Black man for our leader for the the first time in American history,” said Rep. Pete Aguilar of California, the third-ranking Democrat, in nominating his colleague.

The morning meeting of House Republicans turned raucous ahead of what’s traditionally a celebratory day as newly elected members arrive to be sworn into office. Families in tow, the members of the new Congress prepare to be sworn into the House and Senate for the start of the two-year legislative session.

A new generation of Trump-aligned Republicans led the opposition to McCarthy. They don’t think McCarthy is conservative enough or tough enough to battle Democrats. It’s reminiscent of the last time Republicans took back the House majority, after the 2010 midterms, when the tea-party class ushered in a new era of hardball politics, eventually sending Speaker John Boehner to an early retirement.

Typically it takes a majority of the House’s 435 members, 218 votes, to become the speaker. With just 222 GOP seats, McCarthy could afford to lose only a handful of their votes. A speaker can win with fewer than 218 votes, as Pelosi and Boehner did, if some lawmakers are absent or simply vote present.

But McCarthy has failed to win over a core — and potentially growing — group of right-flank Republicans led by the conservative Freedom Caucus, despite weeks of closed-door meetings and promised changes to the House rules. Nearly a dozen Republicans have publicly raised concerns about McCarthy.

Some of the staunch Republican conservatives challenged McCarthy in the private session. He pushed back, according to a Republican in the room and granted anonymity to discuss the closed-door session.

A sizable but less vocal group of McCarthy supporters started its own campaign, “Only Kevin,” as a way to shut down the opposition and pledge their support only to him.

Rep. Dusty Johnson, R-S.D., a leader of a more pragmatic conservative group, said “frustration was rising” with the minority faction.

A viable challenger to McCarthy had yet to emerge. Biggs, R-Ariz., was running as a conservative option, but was not expected to pull a majority. McCarthy defeated him in the November nominating contest, 188-31.

The second-ranking House Republican, Rep. Steve Scalise of Louisiana, would be an obvious next choice, a conservative widely liked by his colleagues and seen by some as a hero after surviving a gunshot wound suffered during a congressional baseball game practice in 2017.

Once rivals, McCarthy and Scalise have become a team. Scalise’s office rejected as “false” a suggestion Monday by another Republican that Scalise was making calls about the speaker’s race.

“This is a lot more important than about one person,” said Doug Heye, a former Republican leadership senior aide. “It’s about whether Republicans will be able to govern.”

Without a speaker, the House cannot fully form — naming its committee chairmen, engaging in floor proceedings and launching investigations of the Biden administration.

It was all in stark contrast to the other side of the Capitol, where Senate Republican leader Mitch McConnell will officially become the chamber’s longest-serving party leader in history.

Despite being in the minority in the Senate, where Democrats hold a slim 51-49 majority, McConnell could prove to be a viable partner as Biden seeks bipartisan victories in the new era of divided government. The two men were expected to appear together later in the week in the GOP leader’s home state of Kentucky to celebrate federal infrastructure investment in a vital bridge that connects Kentucky and Ohio.

McCarthy’s candidacy for speaker should have been an almost sure thing. He led his party into the majority, raising millions of campaign dollars and traveling the country to recruit many of the newer lawmakers to run for office.

Yet McCarthy has been here before, abruptly dropping out of the speaker’s race in 2015 when it was clear he did not have support from conservatives to replace Boehner.

One core demand from the holdouts this time is that McCarthy reinstate a rule that allows any single lawmaker to make a “motion to vacate the chair” — in short, to call a vote to remove the speaker from office.

Pelosi eliminated the rule after conservatives used it to threaten Boehner’s ouster, but McCarthy agreed to add it back in — but at a higher threshold, requiring at least five lawmakers to sign on to the motion. Conservatives said it was insufficient.