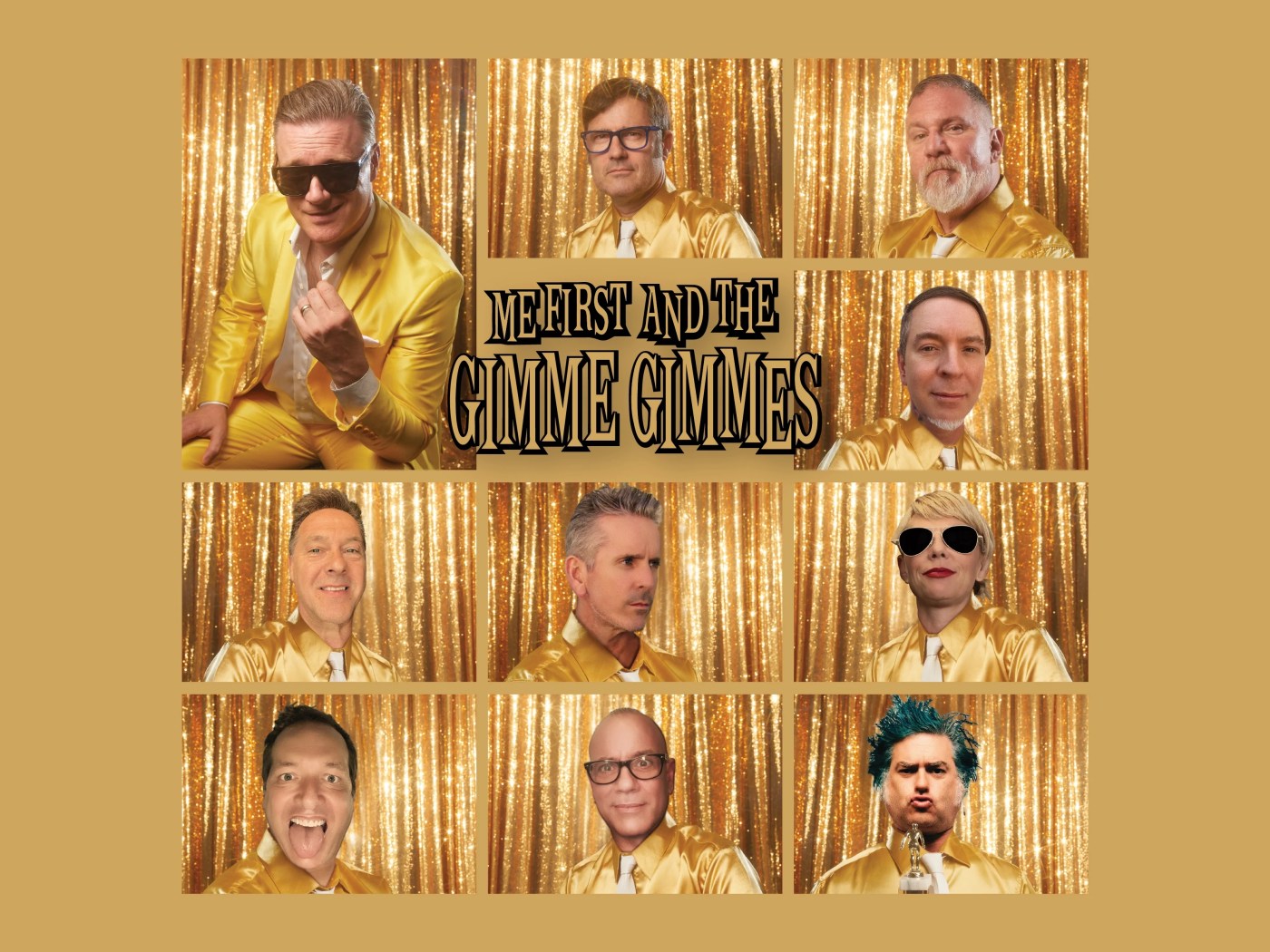 Whatever your definition of punk rock is, it probably didn’t include songs by Celine Dion, John Denver and Kermit the Frog. Unless of course, you’re a fan of punk’s greatest and funniest all-covers band, Me First & the Gimme Gimmes.

“You get to experience the full range of emotions at a Gimmes show,” frontman Spike Slawson said. “And when we look down and see kids beating each other up to a Barry Manilow song, we believe that deep down somewhere, they understand the irony of what they’re engaged in.” The band appears at Big Night Live this Wednesday.

An unlikely supergroup, the Gimmes were formed nearly 30 years ago in San Francisco by NOFX frontman and Fat Wreck Chords owner Fat Mike. Label employee Spike Slawson was soon drafted in to be the singer.

“I was in the shipping and receiving department, and at one point I had to get a box of merchandise to NOFX that they really needed,” Slawson recalled. “Not only did I pick the wrong city, I sent it to the wrong continent. So they had to move me over to the cover band, where I could do less damage.”

The band also includes half of Lagwagon, guitarist Joey Cape and drummer Dave Raun. And with Fat Mike too busy to tour, they have a genuine Ramone on bass: C.J. Ramone, who replaced Dee Dee in 1989 and stayed with the Ramones till their breakup.

“Spike made me an offer I couldn’t refuse,” C.J. said this week. “But I love playing bass again, and having a good frontman is a really rare thing. Spike’s sense of humor and his timing are great onstage, and that probably accounts for a lot of the fans who come to see us. He can engage a crowd in a way that makes them uncomfortable or curious, and laugh at the same time. After playing behind Joey Ramone, it would take a special situation to make me jump into another band.”

Among the Gimmes’ recorded works are a set of diva-associated songs, an album of Broadway hits and plenty of AM radio standards. So is this about saluting songs they secretly love, or getting even with songs they really don’t love?

“Definitely the latter,” Slawson said. “The essential chemistry of this band comes from disliking the songs and bringing them into a form we can relate to. Like, we’ll never do a Kinks or a Rolling Stones song — they may work great, but they don’t deserve it. Those bands are too sacred in my life. But Kenny Loggins, James Taylor, those people deserve it. And I don’t mean they didn’t work hard on the songs they wrote, but I think they appeal to peoples’ inner mediocrity. The most successful covers we’ve done are the ones where you can hear (the punk version) right away. If it doesn’t work in an hour, we probably shouldn’t be doing it.”

He recalls the time they asked the Eagles’ management for permission to cover “Desperado”: “They not only turned us down, they said ‘The band would like you to know that they hate your version’.” Still, he admits they’ve crossed the line once or twice. “When we did a Cher song on the divas album, I felt a little bad about that. Because really, Cher is a national treasure. The songs on that album are a little closer to ones I un-ironically enjoy.”

The Gimmes have been known to get booed at their own shows — which for Slawson is the essence of a good night.

“Last year we played (at the Pavilion in Boston) with Flogging Molly and the Violent Femmes. Those bands got unconditional love and support; we got something a little more complicated. But we love trolling audiences, and if they start booing we’ll push it further. Every show needs a heel, and that’s us.”