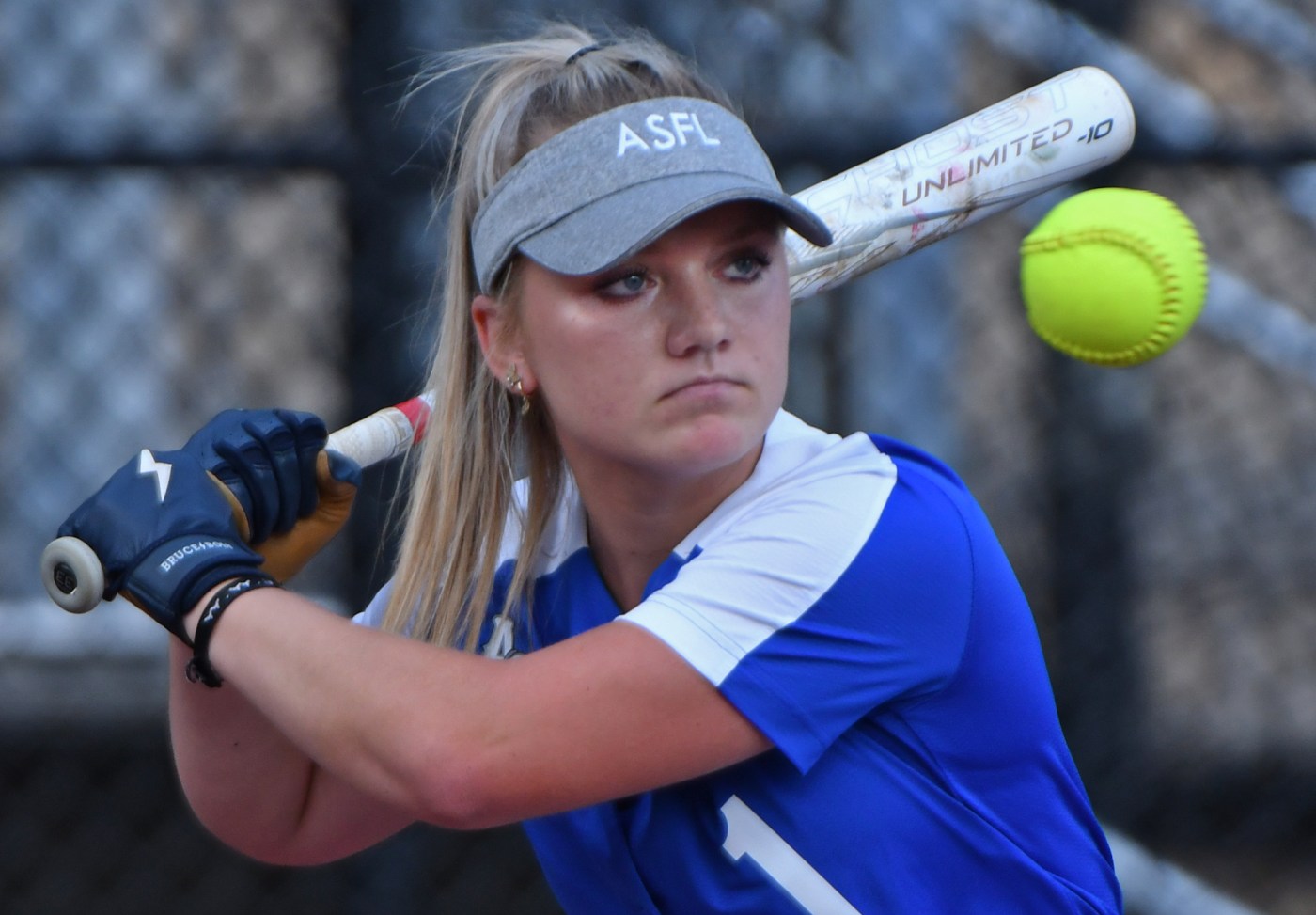 READING — Defending champion Kaelyn Larkin couldn’t remember much of what the conversation exactly was with her dad/pitcher as she took a timeout in the final round of the A Shot For Life Softball Home Run Derby on Sunday at Austin Prep.

The Medfield junior will always remember what followed, though.

Coming back to the plate trailing Taunton’s Ava Venturelli by 10 home runs with 2:33 left on the clock, Larkin cranked out her 11th homer out of the break with 57 seconds remaining to walk off the derby with a repeat title. It was her 16th home run in the final round, adding to a monstrous 32 blasts she hit to kick things off in the first round of a thrilling event. Venturelli finished with 15 in the final round for second (64 total), while Nashoba’s Kylie Doherty hit 11 for third (69 total) and North Attleboro’s Kelly Colleran hit 10 for fourth (68 total).

Add in the $1,500 Larkin raised to contribute toward the over $80,000 ASFL Baseball and Softball fundraised for cancer research from this event, and it was a pretty sweet day for the two-time champ.

“I was trying to win obviously, but I was just happy to be here and come back for a second year,” she said. “(The conversation) was just use your legs and try to get into a good rhythm. That’s when you get on fire, and that’s what I did. … I just try to have fun and enjoy it.”

As the weekend’s events gathered about double the funds of what it estimated last year, the suspense of the derby didn’t fail to disappoint.

After Phillips Academy’s Kylie Buckley smashed 29 home runs during her four minutes in the first round to gain the No. 2 seed in bracket play, she found herself in a slug-fest with Colleran, the No. 7 seed. Her 23 homers would’ve beat half of the semifinalists, but Colleran went nuclear with a derby-best 36 homers, including 21 in her 26 final swings, to advance to the four-player final.

That explosion carried over to her club teammate Doherty later in the round, as the Nashoba slugger needed to beat 30 homers from King Philip’s Libby Walsh. With only 21 homers and 50 seconds left on the clock, Doherty hammered 10 homers over the next 40 seconds to advance.

As a first-time ASFL athlete, Doherty was especially honored to play and thrive among the best for such a good cause. Cancer touches many in different ways, and for her, it took the life of her great uncle before she could meet him. She was named Kylie after him.

As expected, the rest of the afternoon was filled with plenty of pop following the first-ever ASFL Softball Pitcher’s Challenge. Alyssa Edwards (Stoughton) blasted 21 homers in the semi-finals after hitting 23 in the first round, only for Venturelli to beat her via walk-off with 22 homers in less than three minutes. That also helped Venturelli advance to her first final after falling just short last year.

Walsh finished with 54 homers herself, while Attleboro’s Lauren Eby smashed 20 in the first round before losing steam in the semifinals.

In all, 21 hitters came out for the derby, five of which also participated in the pitcher’s challenge. Growth and community is what ASFL founder and CEO Mike Slonina cares a great deal about, and he was pleased with how the day shaped out.