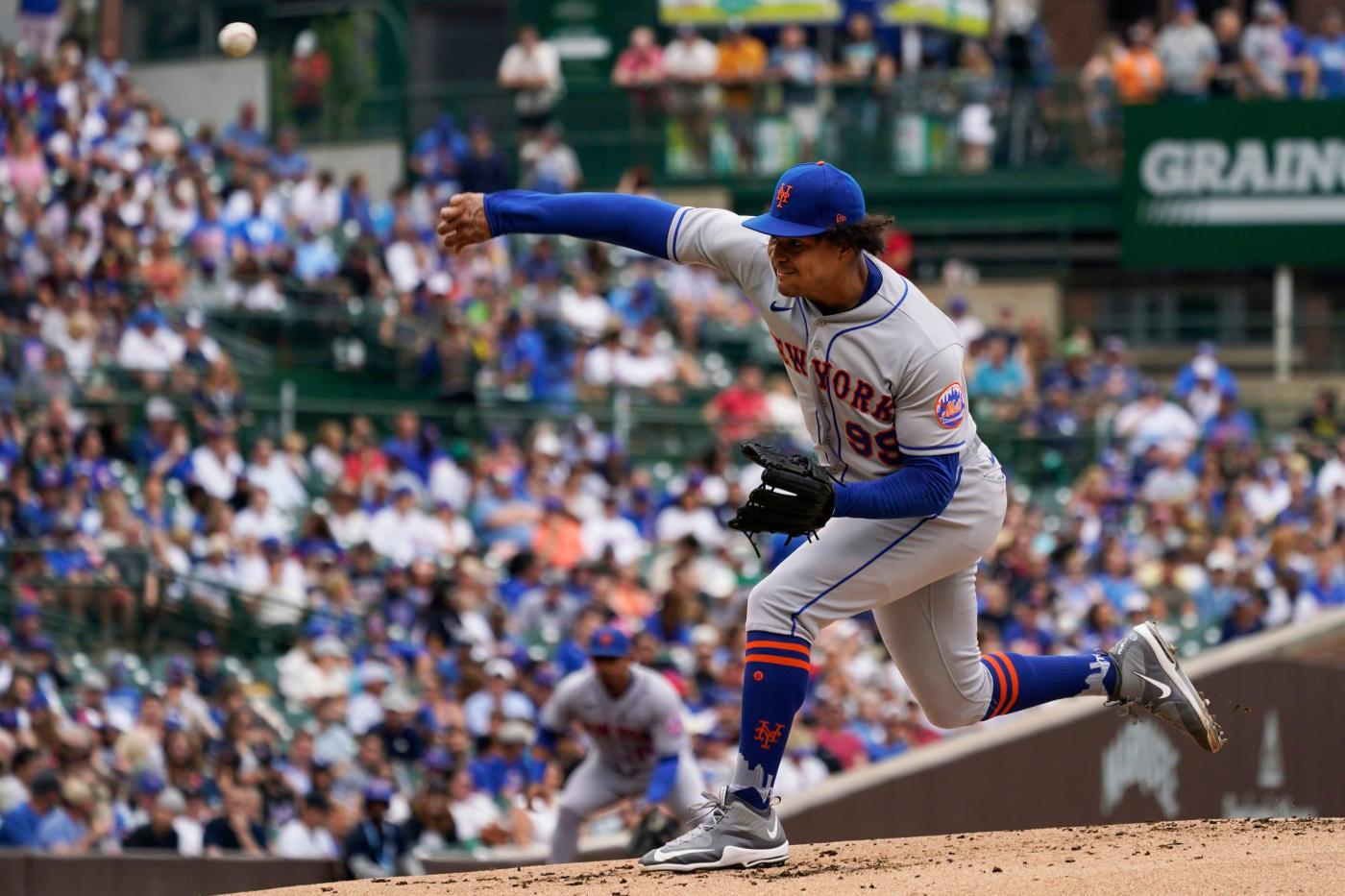 CHICAGO — The Mets could not have taken Game 1 of a doubleheader at Wrigley Field without J.D. Davis, who can pick it.

In the bottom of the 10th inning of a tied game, Adam Ottavino had the pressure turned up when Frank Schwindel, the Cubs’ free runner at second, stole third. Ottavino, who was pitching a second straight inning, understood the assignment: a deep fly to the outfield would walk it off for the Cubs. With a killer instinct, he struck out his first two batters using nine pitches combined.

“Once a guy is on third, you have to give it everything you got there,” said Ottavino, who leaned on his 12-year big-league experience to get through the 10th.

Then came the kicker. Cubs second baseman Christopher Morel sent a grounder to Eduardo Escobar, who made a diving stop to his left and fired a long hop to Davis at first base. Davis, in just his fourth time playing first base this season, made a sensational pick while Morel was one step away from the bag to get the out and end the inning. Buck Showalter said Escobar “doesn’t panic,” and he couldn’t choose which play was better, the third baseman’s dive and throw, or the first baseman’s pick.

Davis had only just come off the bench in the top of the 10th as a pinch-runner for Dominic Smith, who rolled his right ankle while leading off second base and exited the game. Smith will go for an MRI, Showalter said.

“It’s definitely a difficult play,” Davis said. “I’ve just been putting in a lot of practice. Even though I’m not playing defense as much as I wish I could be, I’m putting in work and then just follow through when the team calls me.”

The Mets scored the winning run in the top of the 11th on a Pete Alonso sacrifice fly to right field that brought in Luis Guillorme from third. That one run was all Edwin Diaz would need to save the game. The Mets closer struck out his first two batters and induced a groundout to end the game and hand the Amazin’s a 2-1 win.

“Good teams win those types of games,” Showalter said. “The difference, once again, was Edwin. That’s a hard situation to come into.”

The Mets kept the good times rolling in the nightcap, starting with 6.1 strong innings from Max Scherzer. The Mets ace amassed 11 strikeouts against the Cubs, tying Pedro Martinez for the fourth-most double-digit strikeout games (108) in MLB history. Scherzer enters the All-Star break with a 2.22 ERA, 90 strikeouts and just 12 walks in 69 innings for the Mets in the first half of this season.

“I pride myself on durability, always taking the ball, and to be out for six weeks, miss 6-7 starts, for me that’s unacceptable,” said Scherzer, referring to his oblique injury, when asked to assess his first half. “My job is to go out there. Yes, I’ve done some great things. Yes, I’m pitching well. I expect that out of myself. But I can’t get hurt like that in the second half.”

The Amazin’s and Cubbies again went to extras in Game 2 following another stalemate. Alonso collected his major-league-leading 23rd go-ahead RBI in the top of the 10th when he was hit by a pitch with the bases loaded. The Mets scored another run on an error by Cubs reliever Daniel Norris, who tried to pick off Alonso at second but instead airmailed it into center.

Yoan Lopez pitched a scoreless ninth inning, and just barely held onto an advantage in the 10th. With the bases loaded and the Cubs trailing by one run, Schwindel grounded into a double play, fielded by Escobar. The third baseman tapped his foot on the bag, then fired to first to help deliver a 4-3 win over the Cubs in Game 2 of the Saturday twinbill.

“Those are hard-fought games,” Showalter said. “Guys are not running on a full tank right now. We got one more we’ll try to get tomorrow, and get a much-deserved break for these guys.”

The Mets have swept four of their last seven doubleheaders, including three this season. Saturday was the first time the Mets went to extras in both games of a doubleheader since July 31, 1983, excluding 2020 and 2021 due to MLB’s COVID-19 related seven-inning doubleheader rule, according to Elias Sports Bureau.

Taijuan Walker recorded his seventh straight quality start on Saturday in the opener. He allowed one earned run on four hits in six innings against the Cubs. He struck out five batters and walked two across 95 pitches. Walker has been terrific over the past month, posting an identical 2022 first half as his 2021 All-Star first half.

Walker struts into the All-Star break with a 7-2 record and 2.55 ERA across 91.2 innings and 16 starts. Last year, Walker earned his first career All-Star nod after going 7-3 with a 2.66 ERA in 94.2 innings. He was snubbed out of this year’s All-Star Game, but he has unquestionably been the leader in the Mets rotation, particularly while Max Scherzer was sidelined for seven weeks, and one of the best starters in the league so far this season.

Marcus Stroman, in his first start facing his former team, held the Mets to one earned run on one hit across 4.1 innings and 83 pitches. Stroman was limited to a pitch count in his second start back from a shoulder injury, but the former Mets right-hander made the most of his outing. He struck out six batters and walked two, while working slowly and deliberately against the Amazin’s. The only hit Stroman gave up came off the bat of Pete Alonso in the form of a scorching RBI double to center field in the fourth inning.

“It was a good battle,” Walker said of facing his good friend, Stroman. “I would say I won this because one, we won the game, and two, I went longer than him. So it was a good win for me.”